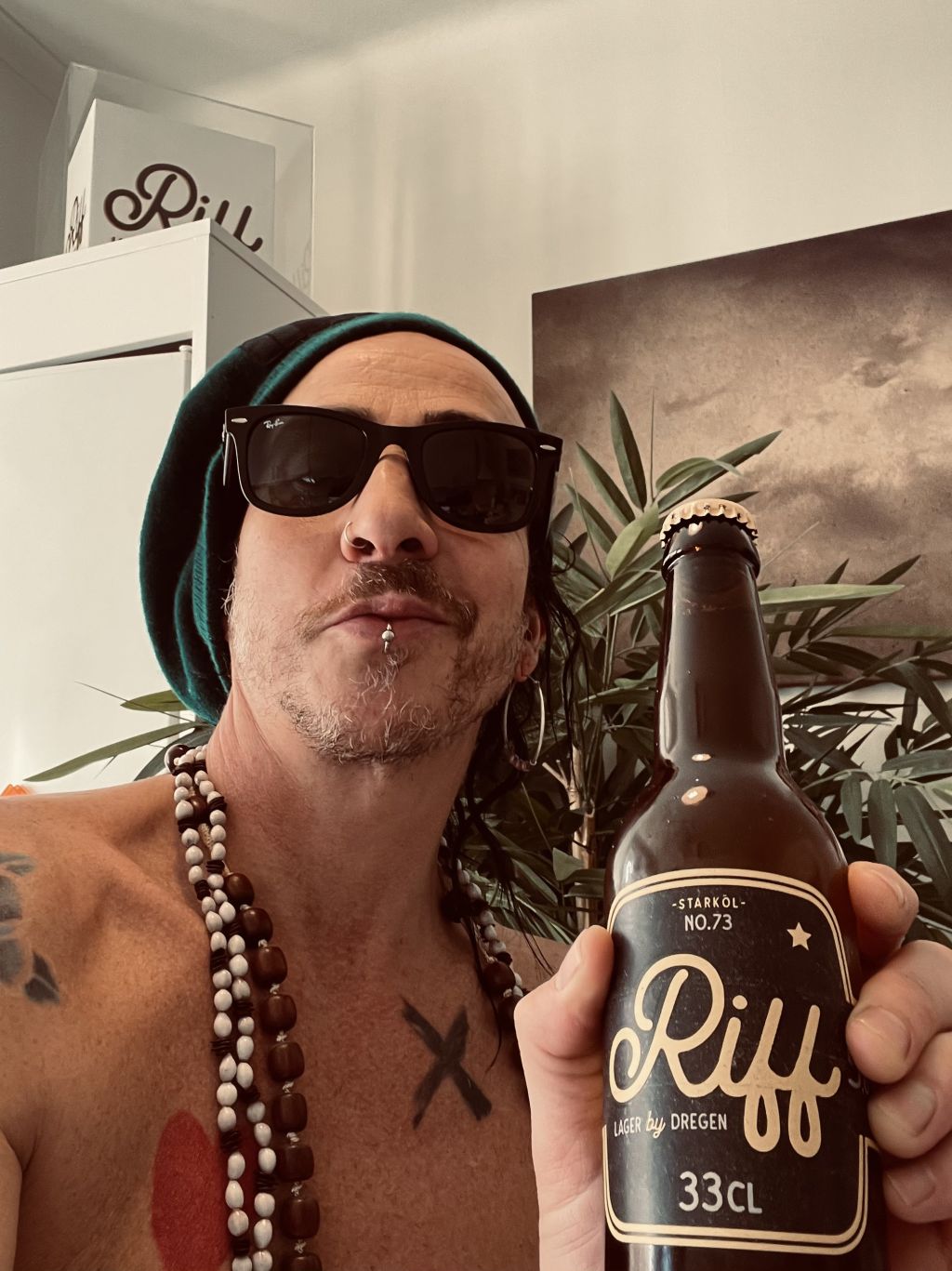 A conversation with Dregen about his RIFF beer and music

According to his personal page and info about the debut into the beer making – https://dregen.se/riff-beer/ – "

In the summer of 2020, Dregen entered the beverage industry with his Riff – Lager By Dregen. The beer took the market by storm and empty shelves unfortunately soon became a common sight when demand overwhelmed the then brewery.
With the aim set on continued development, an extensive selection process was started to find a brewery that could meet both Swedish and international demand. With consensus on quality, flexibility and top-class service, Dregen and the brewery Nyckelbryggerier found each other where the agreement was signed in February 2021.

Better, faster and tastier has since been the mantra for the duo who have now really reloaded to develop the concept. Riff has been expanded and become a “family” consisting Riff Lager, Riff IPA and a Riff Alcohol-free, all brewed with love to the nature of northern Sweden and to the sound of distorted hard rock of the noblest kind. In short, a repertoire for every occasion and scene!"

Today, our collaborator Jesper has sent us this conversation with Dregen in which he explains a bit more about the whole concept, but also about entrepreneurship & art.

How did the project start with Riff?
It started with Motörhead releasing their beer a few years ago, many had probably released drinks before but it was the first band I saw releasing alcohol products. I have received many inquiries over the years but the time has not been right, and so I want to go into the project 100% – in everything from the design of the bottles to taste etc.

Then came the pandemic and then the schedule opened up and I got a request from a brewery and jumped on, a fun project. Riff was released last summer and went very well right away, growing a bit out of the shoes of the then brewery. I always want to develop, always see how far you can take things so when I ran at Nyckelbryggerier it felt right.

They seem to be passionate about the product and do not want it to be one in the crowd, it is a good situation for RIFF now.

Tell us more about the beers, why just an IPA, Lager and Alcohol-free?
When I changed brewery, I wanted a fresh start and expand the family. Make a package, a bit like when you release a record when you have a single and video as well.

Beer is so big that you can do different projects and limited editions; Christmas beer and summer beer etc. There is a lot of creative you can do and it suits me as a musician and artist as well. I still buy vinyl because I love the aesthetic and if I had to choose between two LPs, I always buy the one that looks best. If the record looks really good, the music will be better and it’s the same think with beer, except that here it’s bubbles instead of dist.

Tell us about the name RIFF?
My son’s name is RIFF in second name and the name is really good.

What do the RIFF beverage projects mean to you and what are the goals?
I think it’s damn fun but I have no plans to re-saddle but drive small goals now.
The first step is to get the "family" out and then, when you get out and tour again, you will see fans drinking RIFF in, for example, Spain at a bar after a gig. Getting the beer out for export would be a dream.

How involved have you been in the process of the beers?
I have been involved in almost everything from labels to taste.
I wanted a brown longneck bottle and the inspiration is a retro feeling. A bit like a pilsner movie or like an old medicine jar type from the time when the pharmacy once started.

I have worked with Björn Rallare with the labels and he understands me and my ideas. The stock was more "special" in taste when we made it at the previous brewery and now it is more traditional and classic. The IPA is incredibly good and I am not an IPA lover, but this one is less floral.

Then you want a good beer but be able to take the car afterwards, so we chose to make it alcohol-free. You want to see RIFF on the shelves in all stores.

The DAY OF DOOM Livestream