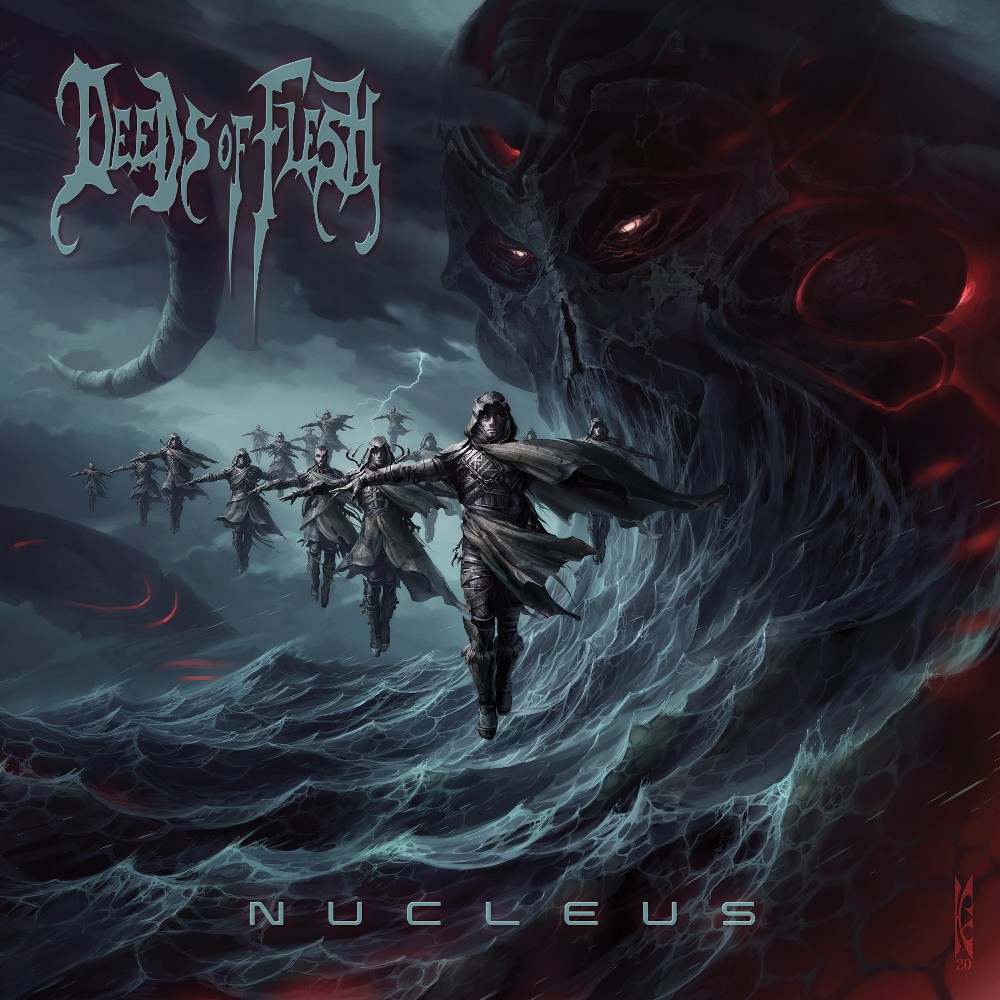 One of the leading purveyors of technical brutal death metal, the Californian Deeds Of Flesh is renowned for intricate works such as "Path Of The Weakening" (1999) and, especially, "Reduced To Ashes" (2003), but, due to cirrhosis death of a founding vocalist and guitarist (2018) they have been delaying new material, this here, "Nucleus" coming a whopping 7 years after the highly acclaimed "Portals To Canaan" (2013). With the only remaining founder having taken over the vocals in addition to bass, "Nucleus" may not be a genre redefiner but it is a worthy successor in terms of brutality, song writing and even offers a few hooks.

Seemingly inspired by the likes of SUFFOCATION and CRYPTOPSY, Deeds Of Flesh (DOF) had been founded by Erik Raymond Lindmark (vocals, guitars), Jacoby Kingston (bass, vocals) and Joey Heaslet (drums) in 1993 and released "Gradually Melted" EP in 1995 on Wild Rags Records. Having signed with the Spanish label Repulse Records they had issued "Trading Pieces" (1996) and "Inbreeding The Anthropophagi" (1998) before Erik and Jacoby founded Unique Leader Records through which to release further DOF albums, "Path Of The Weakening" (1999), "Mark Of The Legion" (2001), "Reduced To Ashes" (2003), "Crown Of Souls" (2005), "Of What’s To Come" (2008) and "Portals To Canaan" (2013), making a great name for themselves, but, in 2018, Lindmark suddenly succumbed to cirrhosis leaving the band’s future uncertain, likely, with some of the material for future "Nucleus" already somewhat written, if not recorded. However, Kingston had replaced him on vocals, co-opting Craig Peters (programming, synth, guitars), Ivan Munguia (bass) and Darren Cesca (drums) for a complete linup which finished the album.

What’s obvious right from the very futuristic "SkynetTM taking over soon" cover is that this is a concept album, which becomes even more evident by looking at the track list of which 2 cuts serve more that concept than brutal death metal. While the opener "Odyssey" technically is not a pure intro or instrumental because Kingston does growl over it, the closing "Onward" is a total outtro. However, in between, we have 7 pulverizing slabs of unmistakably BRUTAL death to the point of DOF 2020 being an aquired taste. While you will eventually love the two leading scorchers, HIDEOUS DIVINITYish "Alyen Scourge" and the ALL SHALL PERISHer "Ascension Vortex", don’t trust your first impression because of the, at times, unbearable tonnage. This is creative noise, to be sure, but it requires a very selective and patient ear so that by the time that latter DEATH harmony hit with a "Demanufacture" FEAR FACTORY twist (Ethereal Ancestors) or you recognized ALKOLOIDian weirdness with NILEish pomp (Races Conjoined) you will have been well into your third spin.

While I certainly appreciate what this band did for extreme death metal and I recognize the undeniable skills and craft of "Nucleus" (thus the score) I find the record lacking sustainable matter, hooks few and far between, melodies even scarcer, especially in the over the top brutal title track and "Races Conjoined". Chalk it down to the frontman postmortem shock slump or whatever but I won’t be spinning this one too vigorously.