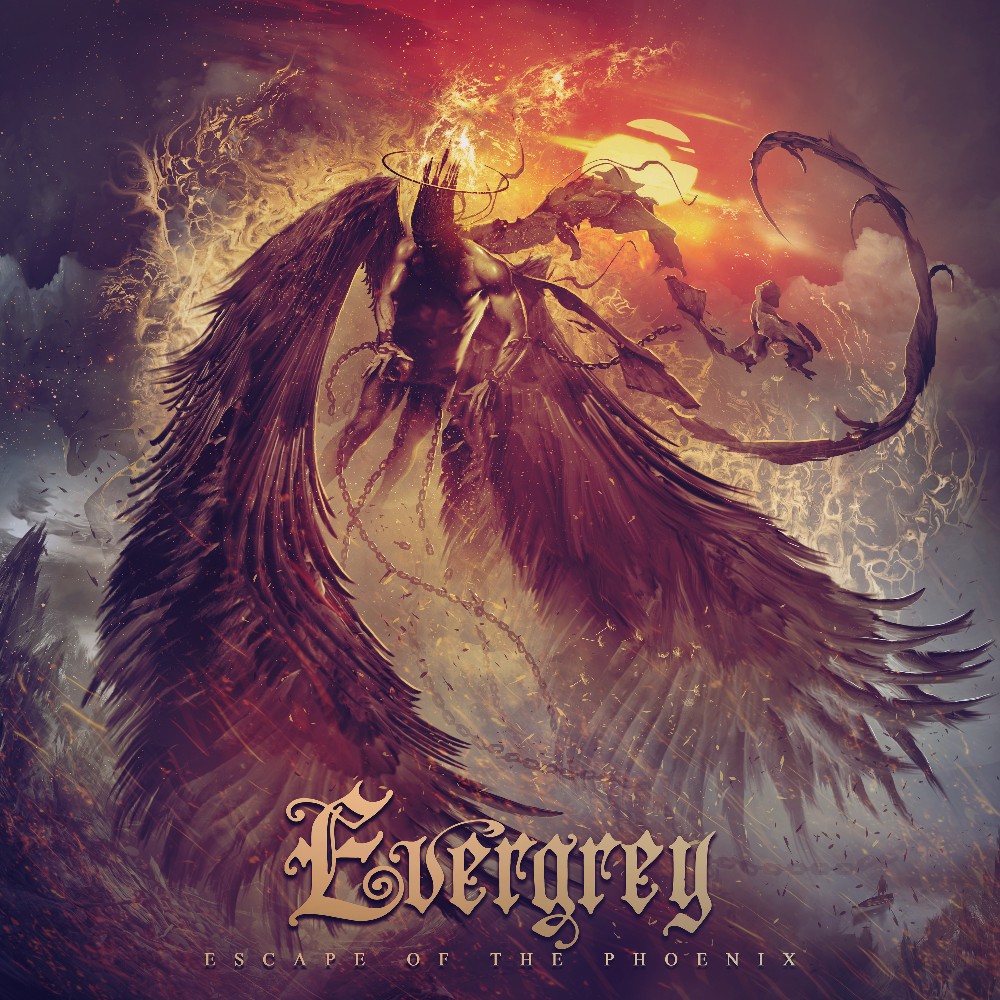 EVERGREY – Escape Of The Phoenix

If there’s one band that seems to mightily resonate with my life it’s the Swedish progressive/power metal act Evergrey. Whether they echo my existential/identity struggles as a U.S. Army soldier deployed to Iraq with "Recreation Day" (2003), my spiritual desolation after my brother’s murder with "Torn" (2008), reflecting my complete mental breakdown in anticipation of a divorce with "Hymns For The Broken" (2014) , "The Storm Within" (2016) after figurative and literal heartbreaking, or crossing "The Atlantic" back and forth several times, Evergrey has been an ever present soundtrack to my shades of grey, like John Ronald Reuel Tolkien’s Gandalf The Grey, never late or early but arriving precisely at the right moment. This year’s "Escape Of The Phoenix", a brand new concept after the water trilogy, is no different in this regard, again matching my current situation perfectly: when you’ve been strong for so long, one day you just wake up , let go and let things roll, let "chips fall where they may", to quote "Fight Club" Tyler Durden and the music, with more ups and downs then ever before, heavy as hell of the poetry it embodies, once again, is a fitting soundtrack to the internal turmoil.

Now, a good thing about Evergrey is that, while they are constantly evolving they always stay Evergrey, a Gothenburg yet hardly melodeath breed formed around the same time as their two biggest (American) influences, Symphony X and Nevermore, unleashed with a "Demo 1996" followed by "The Dark Discovery" (1998), "Solitude, Dominance, Tragedy" (1999) and "In Search Of Truth" (2001), catching my attention with the very good "Recreation Day", "Torn" (2008) signaling an end to dubious hard rock experimentation and a return to form after the universally panned , horribly produced "Monday Morning Apocalypse" (2006), the aforementioned water trilogy "Hymns For The Broken", "The Storm Within" and "The Atlantic" a true statement for the band that seemed to be getting better and heavier with age, with the last on that list their best offering to date…still today?

Indeed, although "Escape Of The Phoenix" retains a lot of what made "Storm" and "Atlantic" such gems and, as previously hinted, is actually their most varied album to date, it leans heavily toward "Hymns" and getting a little formulaic in the process (of which more later) so, for variation, we have to turn to longer, more progressive tracks, and here, admittedly, Evergrey still shines brilliantly, need I but mention the favorite "You From You" stretched between DIRE STRAITS’ "Brothers In Arms" to SWALLOW THE SUN’s "Hope" with one of those wonderful romantic choruses bursting with vocalists’ Tom S. Englund’s pent up frustration and pain, an all too familiar helpless anger at someone who can’t be saved from themselves no matter how hard we try to do it for them, turning into an equally melodic second chorus for a kind of sequel to "The Lonely Monarch". Do you want more melody? How about the PINK FLOYDian epic "Stories", a sort of fusion between "Impossible", "I’m Sorry" and the marching rhythm of "Archaic Rage"? And definitely check out the DARK TRANQUILLITYic and MARILLIONic "In The Absence Of Sun" (with the chorus worth the track alone) and, finally, one of the best and most coherent hymns Evergrey has ever penned, the closing "Run", a triumphant (?) funeral dirge marked by excellent progressive melodiscism.

As to the formulaic tendency I brushed on earlier, the opening "Forever Outsider" (with the "always felt like a stranger to mankind" lyrics I could sign my own name under) an echo to "My Allied Ocean", "A Dandelion Cipher" and the "Catharsis" ANTHRAXian "Eternal Nocturnal" (with a face-melting solo) may seem cut out from the same cloth, but we also have an excellent melodic anthem like "Where August Mourn" (a nod to "Astray"), the title track adorned with creepy horror key verses and a surprising thrashy transition, or the TOOLish "Leaden Saint" with the best riffwork on the album technically marrying NEVERMORE to GOJIRA, to match those four aforementioned progressive perfections and brilliant rhythm and lead work (the solos!) and then we get "The Beholder" featuring DREAM THEATER’s vocalist, Kevin James LaBrie. Now, the band and La Brie love it and I’m not saying I don’t like it but it is the weirdest track on the record, a little latter IN FLAMESian, heavily DEPECHE MODErn and KATATONIAn (Englund sounds more like Jonas Petter Renkse than ever) it could easily pass for a KATATONIA song were it not for the Englund/La Brie duo. When you keep in mind how different these two phenomenal vocalists sound (La Brie can reach incredible highs) you can picture it as more of a DUEL and it will require at least 3 spins for you to start liking it, at least that’s how many I needed.

Although "Escape Of The Phoenix" may not be as immediately pleasing as "Storm" and "Atlantic" it is still worth our time and money, something Tom S. Englund (vocals, guitars), Henrik Danhage (guitars), Rikard Zander (keyboards), Johan Niemann (bass) and Jonas Ekdahl (drums) can be proud of and yet another reason why Evergrey will always have a special place in my heart, but I wonder: how much longer can they keep on mirroring my life?