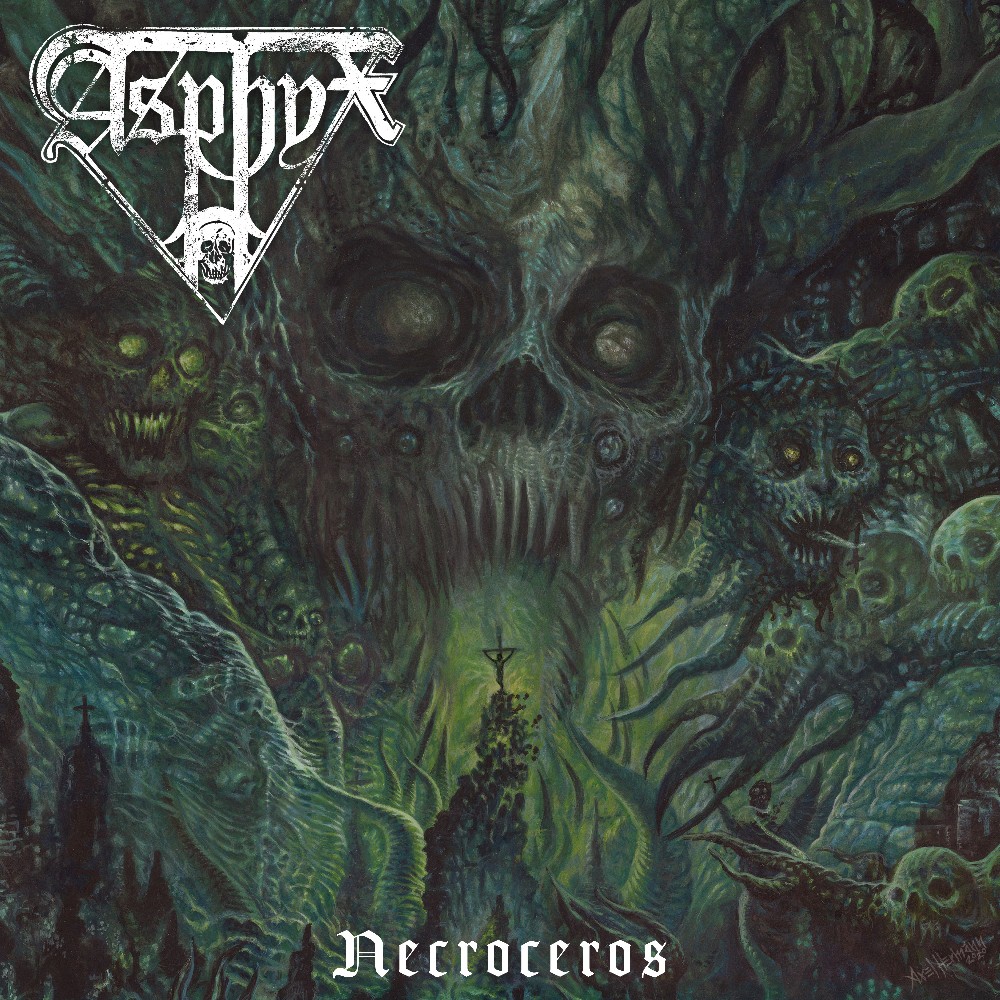 Asphyx is a band which needs no introduction. Known for classic death/doom classics such as "The Rack" (1991), "Last One On Earth" (1992-featuring a burnt corpse of a Roman Catholic priest on the cover) and the eponymous (1994), the Dutch juggernaut always churns out at least decent doomy metal of death and this year’s "Necroceros" is no exception. What separates it from the previous works is a greater emphasis on melody and hooks without sacrificing the inherent brutality. I would even say that the album is more brutal precisely because of the catchiness.

The band, formed by drummer Bob Bagchus and guitarist Tony Brookhuis in 1987, had started out independently vying for label attention with a series of demos "Carnage Remains" (1988), "Enter The Domain" (1989) and "Crush The Cenotaph" (1989) collecting bassist vocalist Joost (soon replaced by Christian Colli) and Eric Daniels (guitarist) for the lineup, before Gore Records released the "Mutilating Process" single (1989), and, finally, "Promo ’91" resulted in the deal with Century Media for the classic full lengths "The Rack" (1991), "Last One On Earth" (1992), both recorded with former PESTILENCE vocalist Martin Van Drunen (bass, vocals) who had left before the eponymous (1994), after which Asphyx disbanded, but re-emerged as both Asphyx and SOULBURN, releasing "God Cries" (1996) under the old moniker with the two founders (Bagchus and Brookhuis) completed by Theo Loomans briefly on vocals, bass and guitars until his tragic, presumably suicidal, death in 1998 and Brookhuis leaving permanently. Upon Eric Daniels’ return, Asphyx had released "Embrace The Death" (1996-originally recorded in 1989 then meant as a debut but never released) and then, Bagchus, Daniels (who functioned as SOULBURN from 1996-1999) had coopted fellow SOULBURN member Wannes Willem Adriaan Gubbels (bass, vocals) to make one more album, "On The Wings Of Inferno" (2000) after which Asphyx disappeared for 7 years. They had returned with "Death… The Brutal Way" (2009), wisely reemploying Van Drunnen along with Gubbels (who left shortly thereafter replaced by Alwin Zuur) Bagchus and new guitarist Paul Baayens, the ensemble stronger and more powerful than ever which fact the subsequent "Deathhamer" (2012) and "Incoming Death" (2016) confirmed, despite founder Bagchus leaving in 2014, replaced by Stefan Hüskens. Asphyx was rejuvenated and still hungry for more.

If there is a silver lining to the COVID-19 quarantine (so as not to say "silver lining to the pandemic", per se, because of the huge number of lives it has taken and continues to take) it is that bands had nothing to do but write and play since they could not tour. This is why "Necroceros" was created and released so quickly and why it is such a mature, focused effort filled with soon-to-be classic riffs. Take the opening "The Sole Cure Is Death" a lyrically horrifying fictional "what if" tale on psychopathic serial killers escape from prisons and the subsequent hunt for them resulting in their rightful deaths, listen to the opening riff and tell me you don’t hear "M.S. Bismarck" from "Last One On Earth"! Interestingly, the classic riff is juxtaposed by seriously doomy melodic ones which remind me of late 90s/early 2000s MY DYING BRIDE. That impression is even stronger with the subsequent crusher "Molten Black Earth" which has, again, classic Asphyx all over it, and the riff, the RIFF is pure death metal mastery you will hum from the 1st spin. The MACHINE HEADian NAPALM DEATH "Mount Skull" provides a necessary balance as well as sets up a recurring pattern: slow and crushing followed by fast and deadly, but nothing could have prepared me for the magnifiscent "Three Years Of Famine" (about evils of Maoist China) where melodiscism points to METALLICA’s "…and Justice For All", particularly "To Live Is To Die". This song, and I realize this is death metal, is simply beautiful and it is followed immediately by the ferocious "Botox Implosion" bringing SEPULTURIC "Dictatorshit" to mind. "In Blazing Oceans" is another surprise in melody combining DARK TRANQUILLITY with HYPOCRITICAL riffs from "Abducted" and sludgey overtones. Two more highlights deserve mentioning (although no track falls below a 4.5 standard). On "Yield Or Die" Bolt Thrower and MASTODON rule and rhythm recalls Vincent Damon "ALICE COOPER" Furnier’s "School’s Out For Summer" while great huge riffs, again, MACHINE HEAD. Then comes the end, the gargantuan title track, moving at a slow crawl like OBITUARY in "Cause Of Death", excellent riffs recall, again, HYPOCRITICAL dirges and also kind of postmetal melodic CROWBAR but the track is juxtaposed by quick bursts of death metal ferociousness. And then, it’s over so just press play again.

One of the first pleasant surprises this year, "Necroceros" is like the first indictment of the deadly pandemic we’ve all been struggling with all past year. The band pulled all the stops and created one of their best albums, certainly the best post-reunion. Some of the tracks could have been better, longer, more progressive, "The Nameless Elite" primary example, but Asphyx already is excellent and exceptional and going fast in the right direction. "Necroceros" is definitely worth your time and money if you’re into quality death/doom.