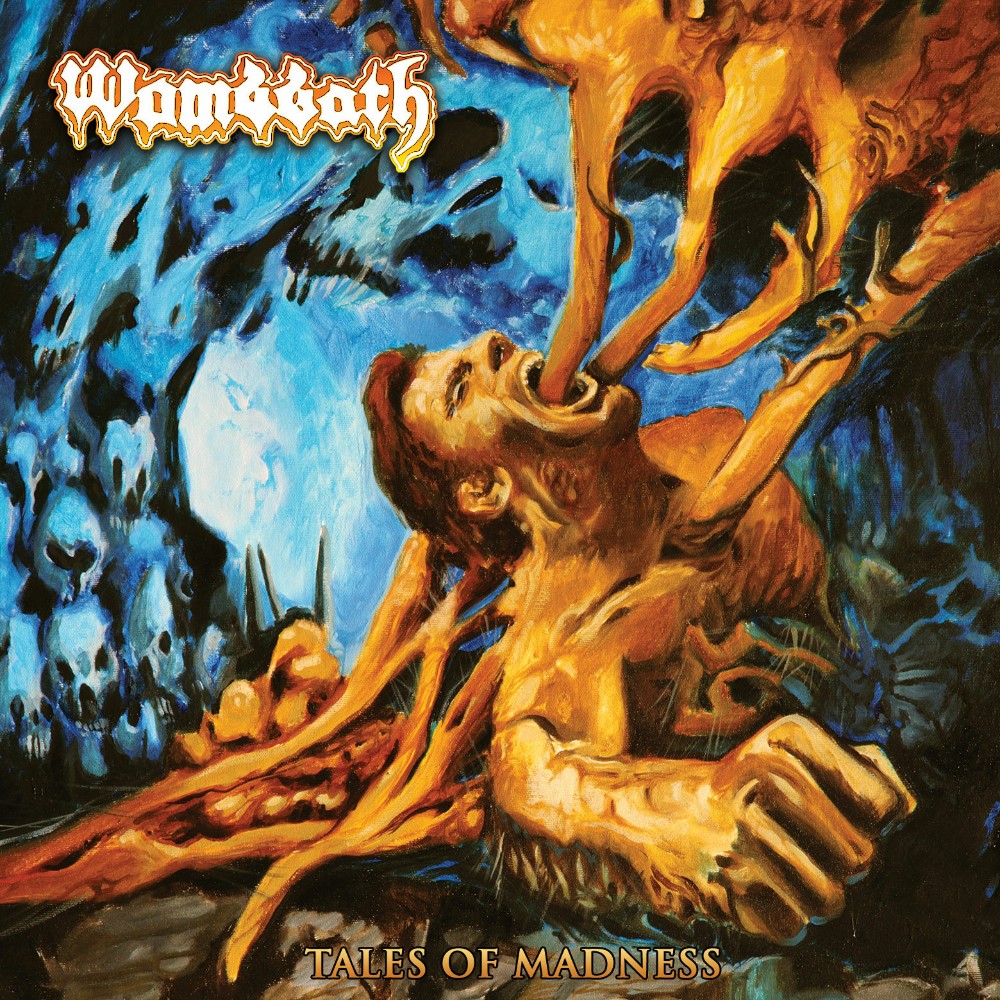 As I have repeatedly mentioned I am not a big fan of Swedeath, that is Swedish death metal as popularized by ENTOMBED, DISMEMBER and GRAVE. First of all – the sound, to these ears, all the power and strength is taken away by the mix which sounds as though amplifiers and speakers have been covered with heavy blankets. Some people call this old school or unique but to me it just sounds like rubbish. Secondly – the songwriting, often based around a few chords with little variety to say nothing of melody unless, and, in that vein it is a big UNLESS, the songwriters inject some IRON MAIDENesque harmony and the guitarist(s) happen(s) to be good. Then we end up with the likes of HYPOCRISY and even the aforementioned DISMEMBER can pleasantly surprise. In the scene, though, this former tendency still dominates so I easily take note of the exceptions, which WOMBBATH is a notable example. Actually, the band’s old/new album "Tales Of Madness" is an example of both approaches, with the older material decidedly inferior to the new.

The fact that WOMBBATH is an old band going back all the way back to 1990 (the year of MEGADETH’s "Rust In Peace", PANTERA’s "Cowboys From Hell" and KREATOR’s "Extreme Aggression") works in band’s favor (more on that later) especially when you consider that their origins go even two years before as THE SHADOWS and SEIZURE before settling on WOMBBATH. The original lineup consisted of Tomas Lindfors (vocals) (1990-1993), Håkan Stuvemark (guitars), Tobbe Holmgren (guitars) (1990-1995), Richard Lagberg (bass) (1990-1995) and Roger Enstedt (drums) (1990-1995), things having begun with the independently released "Brutal Mights" EP (1992) followed by only one LP, "Internal Caustic Torments" (1993) on Thrash Records before the 1995 breakup. Reactivated in 2014 by the sole remaining founder Håkan Stuvemark for 3 more records, "Downfall Rising"  (2015, Dark Descent Records), "The Great Desolation" (2018-Soulseller Records) and
"Choirs Of The Fallen" (2020-Soulseller Records) WOMBBATH finally settled on a quintet Jonny Pettersson (vocals, guitars), Lars Thomas Von Wachenfeldt (guitars), Matthew Davidson (bass) and Jon Rudin (drums) joining Stuvemark. This new album is actually partially new, with tracks 1-3 re-recorded tracks from the ‘Brutal Mights’ demo, track 4 written in 1990 and the very first WOMBBATH song, track 5 a remake of the track "Lavatory Suicide Remains", track 6 written before "Lavatory Suicide Remains" in 1993 and track 7-8 brand new songs, but all of the tracks were mixed in such a way that one supposedly cannot tell the difference between the old and the new.

Looking at the above breakdown of the tracks help understand while the song quality varies so much not surprisingly along that breakdown. Indeed, it is safe to say that anything written before 1993 is just generic Swedeath bands such as DISMEMBER, ENTOMBED, GRAVE or UNLEASHED have written before and better, "The Grave" the worst offender, which takes care of both the first half of the album and the overall score for "Tales…". Things start to get interesting with "Lavatory Suicide Remains" and "Save Your Last Breath To Scream" but those final 2 tracks, the title and "The Fleshly Existence Of Man" which show the songwriting mastery of this ensemble, with excellent melodiscism akin to early IN FLAMES, CARCASS and especially HYPOCRISY. In fact, I could place them between "The Jester Race" (1996), "Symphonies Of Sickness" (1989) and "The Final Chapter" (1997), respectively, so you see what kind of quality we’re talking about here.

"Tales Of Madness" is a very uneven album where the latter material easily outclasses the former the only thing even throughout being the excellent leads. But it shows how a decent band can evolve into something actually worth your attention, time and money. I eagerly await their next full length which is being recorded as we speak.

BLAZE BAYLEY – War Within Me

NORTHORN – The Art of Destruction