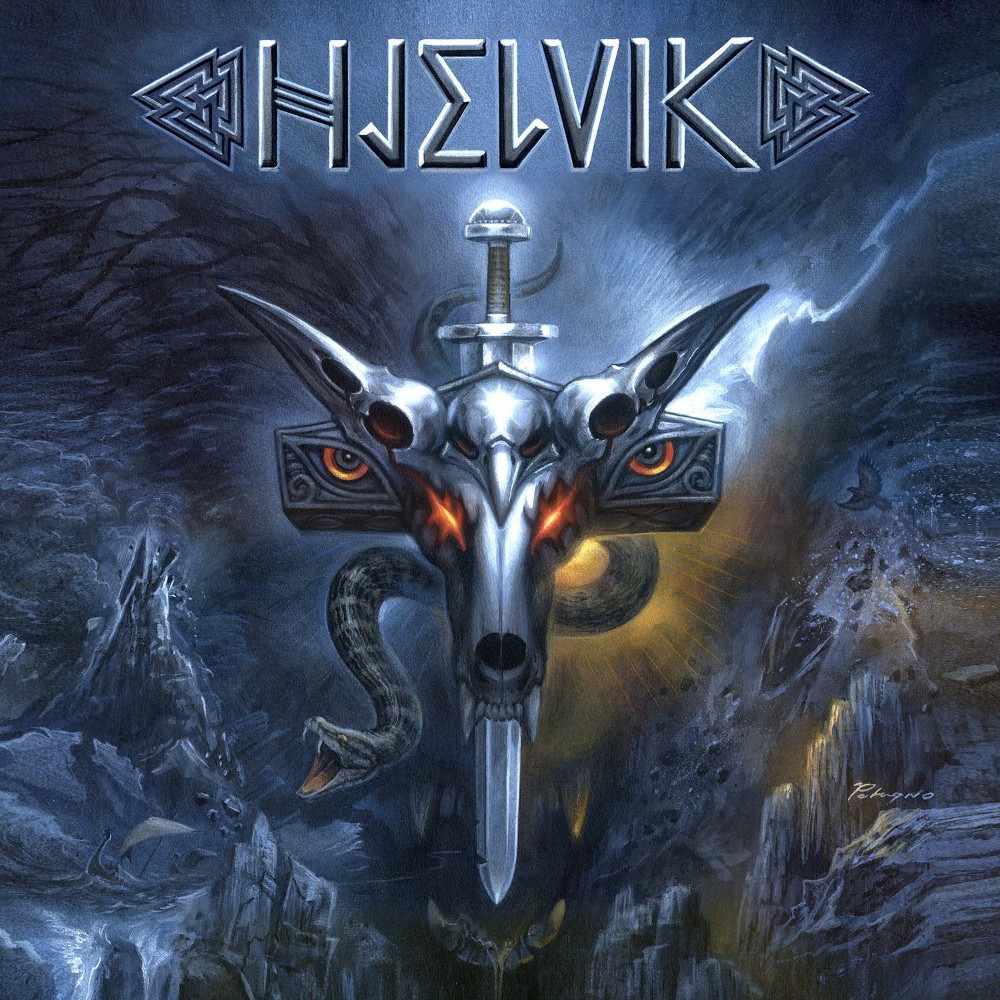 HJELVIK (spelled with all capitals) is a new project of ex-KVELERTAK/DJEVEL vocalist Erlend Hjelvik (vocals) but, despite the name suggesting a solo project, it is not one and Rob Steinway (guitars), INCULTER guitarist Remi Andrè Nygård, Alexis Lieu (bass) and former BENIGHTED drummer Kevin Foley are all participants of a band effort with Hjelvik the songwriter. Or, perhaps, this is closer to the DEATH or MEGADETH arrangement where the frontman calls all the shots? In any case, this mixture of Viking and black with serious traditional influence is neither groundbreaking nor terrible.

True, the 10 track under 40 minute material contains some excellent songs, particularly the MERCYFUL FATEful and BLACK SABBATHy "12th Spell" and the favorite "North Tsar" which recalls the criminally underrated MENTAL HOME (remember them?), latter DEATH and CRADLE OF FILTH’s "Desire In Violent Overture", and, finally, the multimelodic "Helgrinda" recalling early AMORPHIS with an excellent black metal speed up transition as well as proggy transition keys a’la DEEP PURPLE to get their own time in the end. The less interesting but still noteworthy are the hard rocking power metaller "Glory Of Hel" with a rusty LENNY KRAVITZy solo and IRON MAIDENic closer "Necromance" (cute neologism) with more progressive leanings and an annoying fade to black when it was just getting interesting.

Sadly, roughly half of the album offers little beyond the safe, standard fare Viking heavy metal and, even when it tries to, the lyrical content, such as "The Power Ballad Of Freyr" which approaches AC/DC to match similar riffing, doesn’t help. While the anti-Christian "Thor’s Hammer", "Ironwood" and "Kveldulv" are equally bland at least the last two have catchy melodies even if "Ironwood" gets a little too close for comfort to "She-Wolf" (the solo!) and "Kveldulv" to "Secret Place", both of MEGADETH’S "Cryptic Writings" fame. Even if "Thor’s Hammer" thinly veiled call to murder Christians on Sunday is not surprising given that DJEVEL is a Satanic band (what with the name old English for the Devil) I find the overall stylistic similarity of HJELVIK to the Christian metalcorers WAR OF AGES (especially in vocals) a delightful irony, although, I cannot rule out intended mockery. Frankly, I don’t know whether I should take it all seriously or laugh it out because one can never be sure.

HJELVIK won’t make me a believer but it does have enough of songwriting jewelry to last you for those 3 or 4 spins you’ll need to fully comprehend the full measure of its grace. All the cynicism aside, though, I feel like Erlend Hjelvik wasn’t really trying too hard to create anything fantastic but rather to merely blow off pent up steam and artistic frustration whilst having some fun in the studio (the end of "Glory Of Hel"). For this reason I don’t foresee this project ascending very high, although, if it does I will gladly repent in sackcloth and ashes.