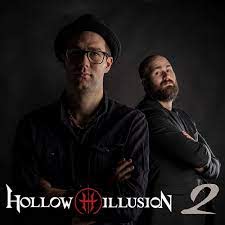 I distinctly recall listening to and reviewing the Norwegian duo’s predecessor, the self-titled offering from 2016, and I found it only halfway interesting and somewhat mediocre in the overall perspective. Where do we stand with this latest effort of theirs then? Well, “2” does come across as a slightly more focused and musically cohesive record than the aforementioned debut album, which is obviously a good thing, and it possesses a stronger musical identity and a bit more charisma too. In terms of style and sound, these guys are still influenced by Black Sabbath and Thin Lizzy (and probably also Ozzy Osbourne, DIO, and Pentagram) and some wicked riffs and cool melodies appear relatively often throughout, but the problem is that none of the compositions are downright thrilling to listen to or sufficiently memorable as such.

My main gripe with this output is the vocals in that they rarely manage to infuse the tunes with a proper dose of passion and emotional intensity; they add very little to the songs and much of the time they appear lackluster. The slightly raw sound, which is spawned and driven forward solely by bass, drums, and vocals, is pretty special and there is a lot of potential to be discovered here, but the song material is simply not as strong or muscular as it could have been and I find most of it only mildly interesting rather than genuinely good or remarkable.

“2” is a better and more satisfying listen than “Hollow Illusion” but it does not quite manage to excite me and it lacks staying power. Still, these guys do have a strangely charming sound of their own, so if you are curious as to what Hollow Illusion have to offer then by all means give their latest opus a spin or two. The groovy “Tide is Turning” is arguably the best of the bunch, so make a note of that one.