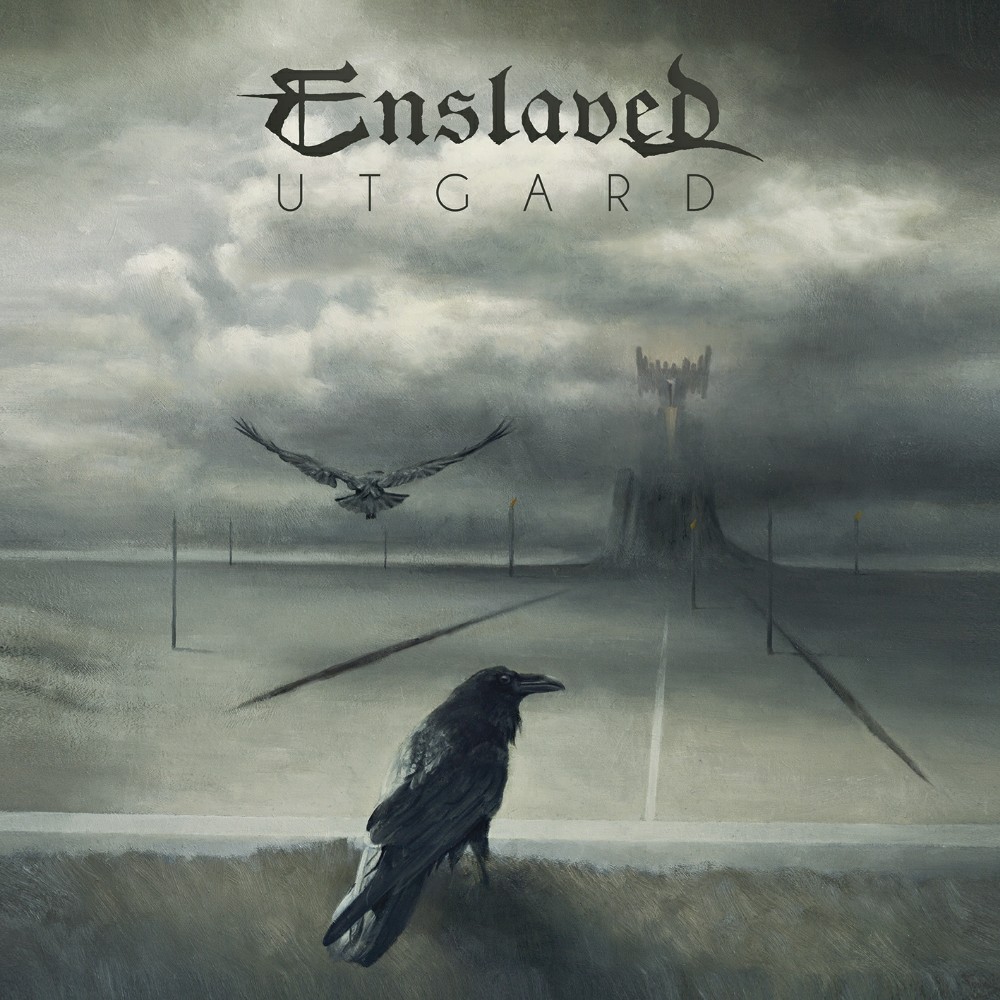 Say what you want but the West-coast based, Norwegian progressive blackmetallers are a hit or miss when it comes to the appeal (not the quality, which is, admittedly, always very high) of their albums. The 2017 experimental "E" was so different from anything they had done before it was an auditory shock to the "In Times" (2015) admiring fan such as myself. Perhaps I didn’t understand, and, perhaps, I still don’t understand this previous album, but to me it just sounded weak, as if they had become jealous of Opeth’s de-deathening tendency and followed it faithfully. Thankfully, while "Utgard" does address some "E" aspects (thus the score) mostly it is a return to form and the greatness of such classics as "Below The Lights" (2003), "Isa" (2004), "Ruun" (2006), "Axioma Ethica Odini" (2010) or "RIITIIR" (2012), with melody and harmony skillfully married to black metal, in short, back to what Enslaved is and should be all about, and where they are most effective and attractive.

According to Encyclopedia Metallum, the band’s origin can be traced back to the short lived death metal project Phobia which, having disbanded yielded the two pillars of Enslaved: Kjetil Tvedte "Kjellson" Grutle (vocals, bass, mouth harp, electronics, effects) and Ivar Skontorp "Bjørnson" Peersen (guitars, keyboards, piano, electronics, effects, percussion, backing vocals) who persist to date as the main composers. At the time, Ivar Bjørnson and Grutle Kjellson were respectively 13 and 17 years old but, inspired by Demonaz of Immortal after the Immortal demo track "Enslaved in Rot", the two formed a new project with Emperor’s drummer Kai Johnny Solheim "Trym Torson" Mosaker, debuting with "Nema" demo (1991) followed by now legendary "Vikingligr Veldi" (1994), "Frost" (1994) after which Torson left to focus on Emperor entirely, and Harald Magne "Helgeson" Revheim drummed on "Eld" (1997), also leaving subsequent the album release. Finding themselves, again, the original duo, the two founders coopted Roy Kronheim (lead, acoustic guitar, percussion, noise, backing vocals) and drummer Per Håvarstein "Dirge Rep" Husebø for three consecutive albums: "Bloodhemn" (1998), "Mardraum: Beyond The Within" (2000) and "Monumension" (2001) before they both, too, departed (Dirge Rep, though, first having completed his parts on the follow-up album) the Enslaved ship allowing for a permanent addition of lead guitarist Arve "Ice Dale" Isdal. The subsequent "Below The Lights" was my entry into the bands catalogue, a love at first hear, I must say, which persisted steadily through "Isa", "Ruun", somewhat dimmed by the experimental and more Pink Floyd-ish "Vertebrae" (2008), but was fully restored with "Axioma Ethica Odini", "RIITIIR", "In Times", which brings us back to my dissapointment with "E" and the subsequent relief that this year’s "Utgard" largely did not follow suit but brought back a lot of what made the aforementioned classics such fun to experience.

What is, then, the titular Utgard? According to founder "Kjellson" Grutle, on a psychological level it can represent the spheres of sleep, dreams or lucid dreams; the outer borders of your own consciousness and what lies beyond them in the subconsciousness, something hard to master completely, perhaps impossible, something dangerous, chaotic, uncontrollable yet enchanting, a place where madness, creativity, humor and chaos dwell. Looking at the cover I can’t help but notice the striking similarity to In Flames’ "Sounds Of A Playground Fading" (2011) which was an album about a childhood nostalgia and I wonder if it’s related. All this is consistent with a very feel of the album, which evokes very different and often conflicting emotions, from the Opeth-ian, Borknagar-ic and Barren Earth-ly very progressive opener "Fires In The Dark" (one most akin to "E"), through the classicly black metal and foreboding Dimmu Borgir-ian "Jettegryta" leading to the two crown jewels if not lynchpins of "Utgard": "Sequence" and the (wisely chosen as the 1st single) favorite, "Homebound". The former is a perfect bridge between the ferocious "Jettegryta" and the most balanced in terms of light/dark ratio, "Homebound". The first track with a truly distict melodic chorus, which recalls In Flames-ian "System" (off the 2001 "Reroute To Remain", so some influence is there) "Sequence" is most akin to "Return To Yggdrassil" (Isa), possibly on purpose. "Homebound" shares the same infectious nature but its fantastic chorus (which embedded itself forcefully in my mind from the very first exposure), has more to do with the sorely missed Agalloch, although its melodiscism also recalls Omnium Gatherum. The subsequent spoken word pseudo-instrumental (a nod to "Monumension" or "Vertebrae") has a diabolical quality to it due to the speaker’s foreboding Norwegian pronunciation, even though he speaks of the creation of the world according to the ancient pagan beliefs which are fundamental to Enslaved’s vision. Thus ends the 1st and more superior half of the album, allowing for the conclusion: a mix of prog and black with greater emphasis on melody and harmony and lesser on brutality, the latter only accented here and there but careful not to overwhelm which is, overall, a good approach.

All the more I am surprised by the very experimental Pink Floyd meets Depeche Mode dancey synthwave with Nine Inch Nails-y industrial guitars on the subsequent "Urjotun", but, just as I am ready to call it one of the most un-Enslaved tracks in their discography it strongly recalls "Secrets Of The Flesh" (Isa) so I choose to leave my mind open for "Flight Of Thought And Memory", rightly so since this the 2nd half’s match to "Jettegryta", which means good old progressive black from "Below The Lights". The remaining 2 tracks, "Storms Of Utgard" and the admittedly beautiful Katatonia-n closer "Distant Seasons" are where "E" E-merges again. But, again, while the former shyily introduces Soundgarden-ian cleans a’la Christopher John "Cornell" Boyle mixing them with mid-era Soilwork and "Ruun" groove along with a Death "Spiritual Healing" melodiscism and, yes, some black metal, the latter is almost non-aggressive, more boldly Cordell-ian but so utterly beautiful in the way the aforementioned Katatonia or latter Anathema would serve, it becomes another favorite, perhaps allowing a reflection that "Utgard" takes "E" to much more interesting places, along with a wish, a want of one or two more tracks on the otherwise 9 track, nearly 45 minute release.

"Utgard" may not be a masterpiece and the 1st half is noticeably superior to the  2nd half which appears more out of focus and less aggressive, less interesting and more experimental, as if they were slowly running out of ideas subsequent "Homebound". But this album is still chockfull of great melody, progression and riffs (such as "Homebound" blacktrash CLASSIC riffing) and these guys are second to none when it comes to progression marriage of old and new currently on the metal meat market. Even the less interesting tracks have very interesting parts and solutions. Despite its flaws, "Utgard" is an album Enslaved can and should be proud of and, therefore, I recommend it with special recognition of "Sequence", "Homebound" and "Distant Seasons".