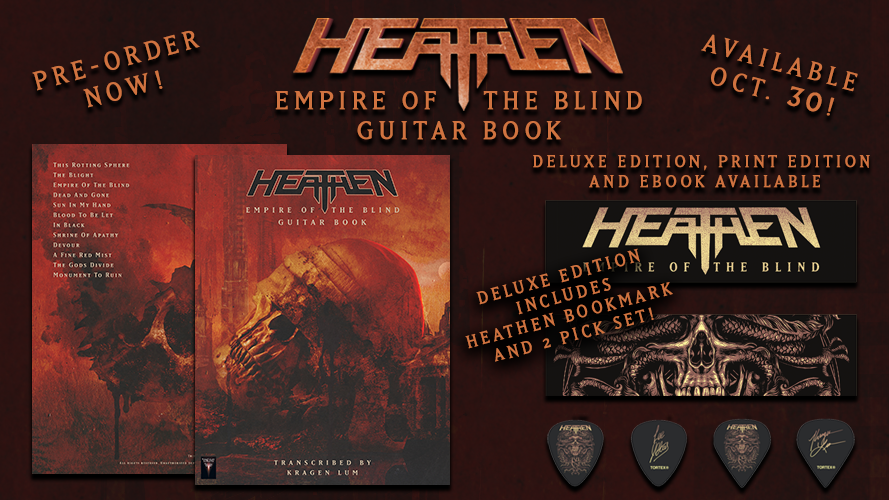 The pre-order for the Empire Of The Blind Guitar Book started 10th of September. Deluxe, Print, and eBook editions available. Shipping October 30. Reserve your copy now in either the SubLevel Records store, or the Heathen store
DELUXE EDITION, PRINT EDITION and EBOOK AVAILABLE and DIGITAL COPY AVAILABLE FOR IMMEDIATE DOWNLOAD!

The Empire Of The Blind Guitar Book features guitar tab and notation for all 12 songs from the 2020 Heathen album release. All songs were transcribed note for note from the album recordings by Heathen guitarist Kragen Lum. Learn how to play the songs exactly as the band plays them with these 100% accurate transcriptions! Presented in 2 guitar format so you can learn to play every riff and solo just as Lee Altus and Kragen Lum played them on the album. 250 pages. Deluxe edition includes Heathen signature guitar pick set, Heathen bookmark and Digital Copy in PDF format.

This Deluxe Print Edition of the book also includes a Heathen Empire Of The Blind guitar pick set with signature picks from Lee Altus and Kragen Lum as well as a Heathen bookmark. The Deluxe Print Edition is only available through SubLevel Records! The cover art for Empire Of The Blind was made by renowned artist Travis Smith (Overkill, Exhorder).

Songs Included:
This Rotting Sphere
The Blight
Empire Of The Blind
Dead And Gone
Sun In My Hand
Blood To Be Let
In Black
Shrine Of Apathy
Devour
A Fine Red Mist
The Gods Divide
Monument To Ruin