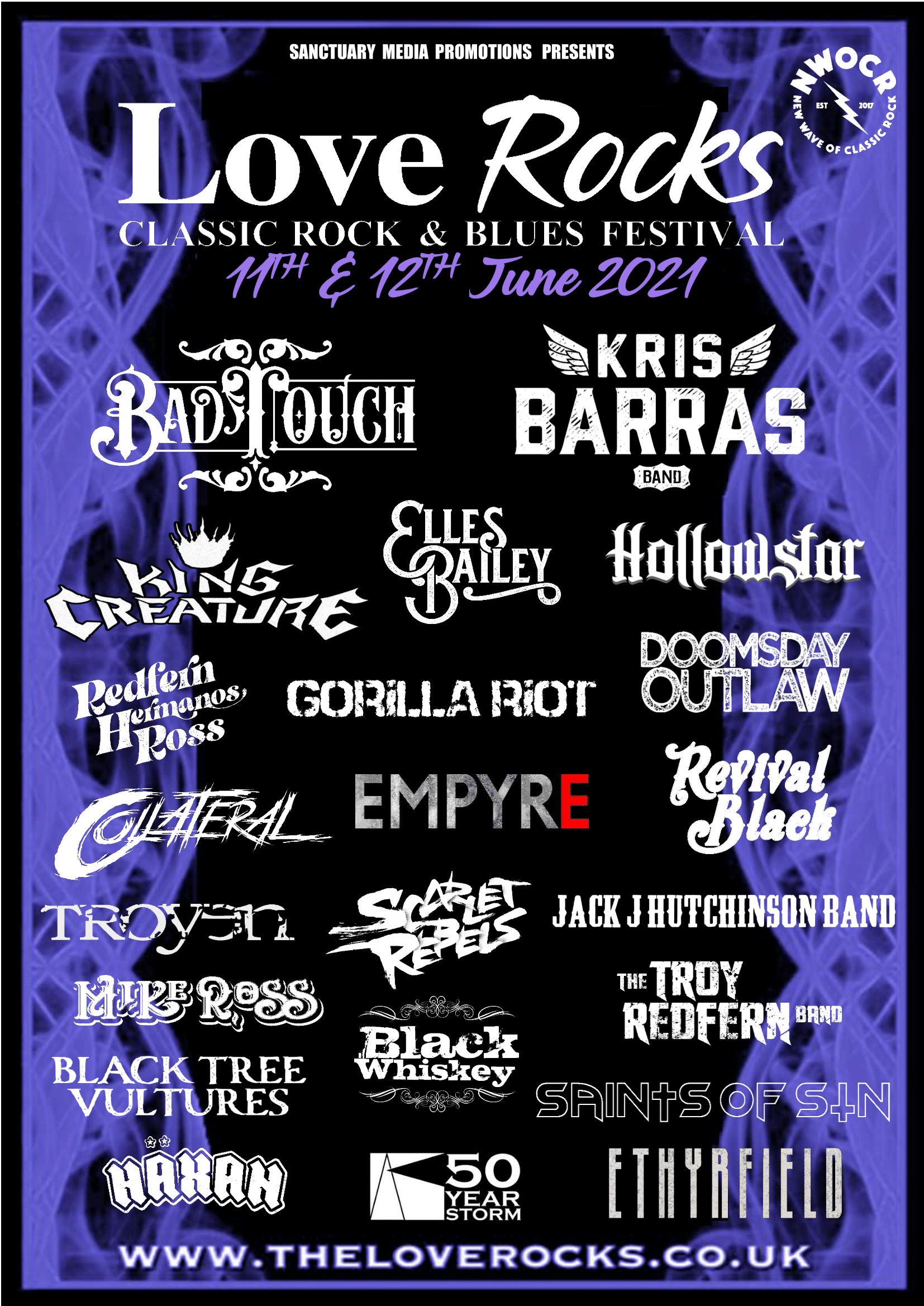 Due to the god-awful pandemic that has torn the live music scene asunder this year, the excellent and rather cosy UK festival named The Loverocks was forced to move its entire operation to 2021 and is set to take place in early June next year in beautiful surroundings near Bournemouth. This small and intimate festival may not necessarily be one that gets a lot of press or that you hear people talk about, but the fact is that this one boasts a fantastic line-up each year and is a must for all lovers of classic rock, blues rock, and hard rock. Eternal Terror Live caught up with one of the organizers of the festival, Jim, to learn more about its history so far as well as its plans for the future.

Hello Jim, I want to start this little feature by saying thank you for agreeing to do this interview – much appreciated. How are you doing these days? I am curious as to how and when you decided to launch a classic rock/hard rock/blues rock festival of your own and where the idea came from? How, when, and where did the idea originate and how did it all start?

J: Hi, thanks for your interest in our festival. There are basically three of us running the event, although we have a lot of help from friends and associates of course, but the unifying factor is we have all been long term rock fans and friends since school. I run a campsite and farm and have since college days joked with friends about having a rock festival here. A few years back a former college buddy who had organized a few events elsewhere in the UK was struggling with finding a suitable venue. I had been helping him and his then business partner with the licensing and legal side of organizing a festival in Sussex, which didn’t go ahead due to issues with the location and neighbours. I suggested that we use the farm and campsite, which is the perfect location, and Loverocks has grown from there and become part of the campsite and the highlight of the year. I enjoyed setting up the festival site and doing the licensing work and two other close friends from school, Scott and Simon, got involved, which brought in some very useful extra skills and knowledge and took the organization of the event to the next level. My former college friend stepped down in 2018 as he felt he was no longer able to work with us on the festival and now it’s Simon, Scott and myself running things. It’s a labour of love and a true team effort between Simon, Scott, and I plus the invaluable help of our Loverocks family team. We are now at Loverocks IV for 2021!

Do you recall your first encounter with rock music and its related styles and genres and how or when you became a fan? Were there any specific bands that changed your perspective on music and eventually set you on the path to become a music festival organizer?

J: My late father was a fan of what he called country so from an early age I was exposed to lots of Johnny Cash, which is no bad thing, and which left its mark I am sure. I still have his vinyl records of course. At school I started listening to the Beatles and the Who and then things got heavier when I discovered Led Zeppelin’s "IV", which I think was my trigger point for heavier blues rock. That really opened the floodgates in terms of what music I was listening to and I graduated on to the usual suspects like Iron Maiden, Black Sabbath, Deep Purple, Faith No More etc. Another turning point was seeing the Mission play live in Bournemouth many years ago, which cemented my love of live guitar-led bands. Since then things have got heavier!!! Music has always been a constant companion and I don’t think a day goes by when I don’t listen to something involving a guitar. For me personally it is how I relax.

As to the festival site and its surroundings, it has a warm atmosphere and intimate vibe, but do you plan on keeping the festival roughly the same size as it is now or have you discussed moving it to a different location in the future? Do you see it growing in terms of attendance and number of bands in the next few years? One could argue that its intimate setting is what makes it so special.

J: The Loverocks festival is totally linked to the farm and campsite and the setting is vital to what makes the whole thing work. It is part of the identity of the event. It would not be Loverocks if it were not at St Leonards Farm. We would not move off site as it is part of the farm and campsite. We don’t have to pay out to rent the festival site or deal with third party landowners, which means we totally control the event and the venue and which I think is quite rare. At the moment the small size is perfect for us and it fits nicely on to the existing 4 star campsite, allowing everybody to use the proper shower and loo facilities and have a decent camping pitch for the camper van, motorhome or tent. Not a portaloo in sight! The whole event feels special and the artists mix with their fans, and sometimes it feels like the whole event is a VIP area, but everyone who buys a ticket is a VIP. Not that we like the term VIP, but it gives you an idea of how intimate and friendly the whole thing is! Having said that, the farm is quite large so we could always use a few extra fields one day…who knows?

We certainly want to have a few more bands and may add an extra day one year. We could grow a little bit and still keep the atmosphere.

The line-up for next year is looking mighty impressive and there are some truly great bands such as Bad Touch, King Creature, Black Tree Vultures, Kris Barras Band, and Black Whiskey listed. Is it important for you to help promote talented bands (some of which may be overlooked or underrated by most people) and how do you go about choosing which bands to play the festival? Is there a certain set of criteria?

J: Thank you! Choosing the bands is probably the best thing about running Loverocks. Simon, Scott, and I love our rock and roll, and the only issue is fitting in all the artists we like. We could fill four days with the number of awesome applications! We have a shortlist already of artists for Loverocks V. In choosing bands there is no specific criteria other than we have to like their music. We are happy to have heavier bands like King Creature and BTV, southern rock like Sons of Liberty and The Outlaw Orchestra, more bluesy stuff like the amazing Elles Bailey and Kris Barras, and more melodic rock from the likes of Bad Touch, Scarlet Rebels and Jack J Hutchinson. I suppose the one thing that unifies it all is that it is powerful, heartfelt music played with passion by original artists. We do this as music fans first and foremost, so we support the bands at other gigs by going along (when gigs are allowed!) and buying their merch and physical albums, which is an important source of revenue for the artists we are working with. We try and promote their new releases as and when they happen. Basically, we try and support past, present and future Loverocks bands and artists whenever possible. We love promoting the tremendous amount of brilliant new music coming through right now. The New Wave of Classic Rock group has been a great source of new music for us as well. We would be listening to this stuff even if we were not running a rock festival.

Are there any bands in particular that you are looking forward to witnessing on stage next year? Any favourites? Personally, I love Doomsday Outlaw and have yet to see them perform live, so that is probably the one that I am most excited about. That and Black Whiskey 😊

J: That is so hard to answer because Simon and I were joking that we don’t want to work over the festival as there is literally not one band we don’t want to watch. They are all so good! Clearly our first year of all original headliners is very special to us, so I will be making a point of watching Bad Touch and Kris Barras of course. In fact, I am going to catch a few songs from everybody. The venue is small enough to make that possible. The line-up is truly a reflection of some of the best new rock music coming through right now. Doomsday Outlaw are fantastic live. I saw them in Sheffield at a Hard Rock Hell event and we just said, "let’s book ‘em". Not sure if you know but we were really saddened to hear the news about Kevin Ingles from Black Whiskey losing his battle with cancer. He was so stoked to be playing Loverocks and was such a lovely guy to deal with and of course a great songwriter and guitar player as well. He will be sadly missed. Hopefully, they will still play but of course out of respect for Kevin, his family, and the band, that is for them to decide when the time is right. As far as I am concerned, they remain on the bill.

Looking back on previous editions of the Loverocks festival, what are some of your most cherished memories? Are there any performances that were awe-inspiring and still manage to bring a smile to your face when you think about them now? I have heard people say that the Just Floyd (Pink Floyd tribute) show back in 2017 was outstanding and something to be remembered. Would you agree?

J: There have been so many great musical memories since the event started. Just Floyd who played again last year were note for note perfect. I remember being away from the stage area when King Creature cranked up their set and thinking "bloody hell that’s good"! I am heading back to watch this ‘Friends of the festival’ SKAM have done two awesome sets for us and Steve Hill weaving through the audience playing guitar will stay with me a long time. Of course, Kris Barras who has played twice before is just an unbelievable guitarist and his song ‘Someone to Watch Over Me‘ had a very personal resonance when I heard him play it. Also playing the guitar behind his neck and with his teeth (not at the same time of course!) is amazing to behold. There are so many happy rock and roll memories and hopefully many more to come.

Thanks once again for taking the time to answer this short interview of ours and best of luck with your future musical endeavours. We are looking forward to next year’s rendition of the festival.

J: You are more than welcome, and it would be great to see some friends from Norway and elsewhere in Europe come along and enjoy the festival with us. You know what to do! Thanks for showing such interest in what we are doing.

ALL PHOTOS BY JON THEOBALD

THE OCEAN – interview with Robin Staps