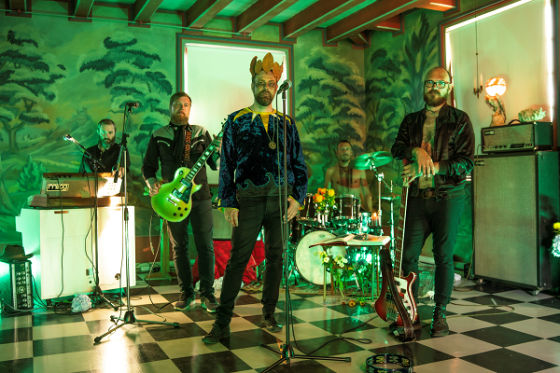 Karisma Records have today released a single from "Dwellers of the Deep", the much-anticipated, fifth full-length album from Prog Rockers WOBBLER.  Titled "Five Rooms" the single is available to stream or download at https://karismarecords.fanlink.to/Wobbler_FiveRooms

The band had this to say about it:

"Five Rooms" is a fast paced song based on some bass ideas from Krisitan. It developed quickly into a song full of energy and interplay, but also with sacral and dreamy passages. "Five Rooms" was a wrap early in the process and we even tried it out live a couple of times on the From Silence to Somewhere tour. We worked a lot with the arrangement of the different sections in the song, to make it flow along and feel organic and natural, even though it bounces between here and there and is full of contrast.

With "Five Rooms" standing out right from the start as an obvious choice for a single, the band also decided to shoot a music video, which was something new for them.

The video was filmed during one hot Oslo day in June utilising the beautiful surroundings of the baroque room at the Linderud Gård, and it has allowed us to offer a slice from the upcoming album, presented in moving pictures and resplendent colours. As the summer is slowly starting to fade from the earth, we invite you to join us on that high summers day and walk with us through Five Rooms.

Filmed and edited by Mike Drop, the video for "Five Rooms" can be seen below and at https://youtu.be/bpOQp9gCfQA

The album itself promises to serve up an exciting blend of both carefully planned, and passionately jammed compositions, encompassing everything WOBBLER has done up to now. The new musical directions showcased on "Dwellers of the Deep" serve to further enhance the quintet’s aural idiosyncrasies, and solidify the band’s burgeoning stature as one of the most exciting and interesting bands on the global music scene, independent of genre.

The production on "Dwellers of the Deep" is open, detailed, warm and punchy, making the soundscapes put together by Lars Fredrik Frøislie an aural feast for the ears . With cover illustration by Athanasius Kircher, and graphic design by Thomas Kaldhol, "Dwellers Of The Deep" consists of four distinctive pieces and is a fine example of WOBBLER´s trademark creative whims and playful exuberance. Track listing is as follows:

"Dwellers Of The Deep" will be available in Digipak and Jewel case CD, digital formats, as well as in four different 180 gram gatefold vinyl editions; black vinyl, two different limited edition coloured vinyls, and a limited edition transparent vinyl. All the limited editions come with a poster.

"Dwellers of the Deep" is now available to pre-order from:

More information about WOBBLER can be found on the band’s Facebook page at https://www.facebook.com/wobblerofficial  or on their website at www.wobblerofficial.com/