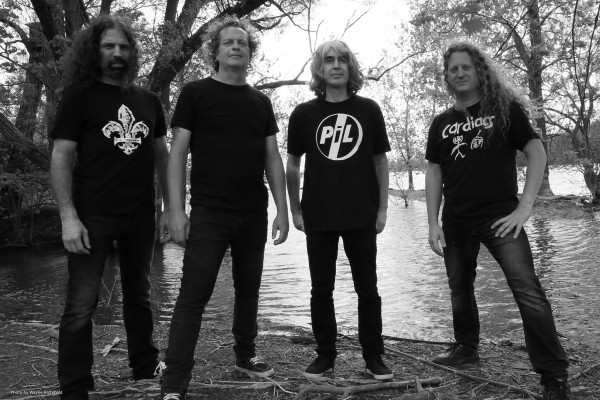 Come one, come all! In an event not to be missed, VOIVOD performs a live in-studio set for an exclusive one time streaming broadcast on Aug 9, 2020 at 4 PM EDT (Eastern Daylight Time). This multi camera shoot and audio mix will happen in real time at the same studio VOIVOD recorded their Juno winning album "The Wake".

Why Aug 9? It’s Denis "Snake" Belanger’s birthday and he wanted to party safely with all his friends and fans from around the globe since VOIVOD touring the planet has been grounded by the Pandemic.

Tickets are $15 CDN plus applicable taxes based on your location. Buy a single ticket or group rates here https://lepointdevente.com/tickets/voivodshowlive

Most recently, VOIVOD have released a 3-track 12" Vinyl and Digital EP entitled "The End Of Dormancy" earlier this month worldwide via Century Media Records.

The EP is centered around a special "Metal Section" version of the title track "The End Of Dormancy" (Off VOIVOD’s latest album "The Wake") with added trumpets, saxophone and trombones. The complementary tracks on this release are exclusive live versions of "The End Of Dormancy (Metal Section)" and the group’s classic "The Unknown Knows" recorded at Montreal Jazz Fest 2019. Here is the exact track-listing for the EP:

VOIVOD – "The End Of Dormancy" EP:

VOIVOD’s "The End Of Dormancy" EP comes with artwork by VOIVOD drummer Michel "Away" Langevin and is available on 180g. 12" vinyl in the following highly collectible and limited editions:

The EP can be ordered here: https://voivodband.lnk.to/TheEndOfDormancy-EP

For the band vinyl version (and many other cool items!), please visit: https://voivodmerch.com/

A remarkable video-clip for "The End Of Dormancy (Metal Section)", directed by Syl Disjonk (who previously created the clip "Kluskap O’ Kom" for VOIVOD) and produced by Igor Simonnet, is now available here: https://youtu.be/iv321MReYW4

VOIVOD’s 14th and much praised latest studio album "The Wake", which was recorded and mixed by Francis Perron at RadicArt Recording Studio, won the Juno Award for "Metal/Hard Music Album Of The Year" in Canada and entered the charts upon release in 2018 as follows: Germany: # 26, Switzerland: # 51, Belgium (Wallonia): # 94, USA Current: # 97, USA New Artist: # 8, USA Overall: # 148.

Also check out the previous singles and videos off "The Wake":

"The Wake" can still be ordered in various editions here: https://VOIVODBand.lnk.to/TheWake

Other VOIVOD news? "A live record will be released later this year on Century Media Records. VOIVOD hope to see you next year on tour!". Indeed, stay connected…