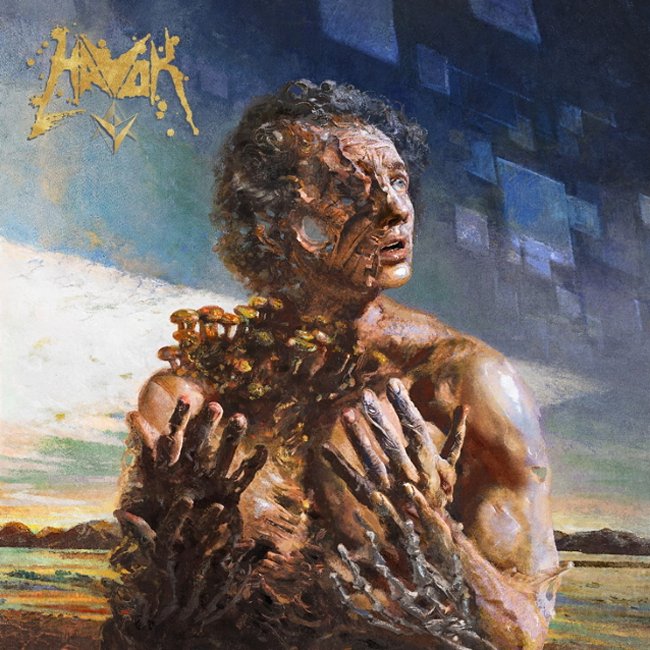 American thrash metal doesn’t always come from San Francisco Bay area, even if it tends to be inspired by that legendary scene. Thrash could come from such unlikely place as Denver, Colorado, as in the case of Havok, who, having released one demo (Thrash Can, 2004) and one EP (Pwn ‘Em All, 2007) managed to spark my interest with a promising debut LP "Burn" (2009), but for some reason I did not check out "Time Is Up" (2011), "Unnatural Selection" (2013) or "Conformicide" (2017). Was I right?

If "V" is any indication (as, after all, the latest material is always supposed to find bands in top shape) I probably should have taken a little more interest in what David Sanchez (vocals, rhythm guitars), Reece Scruggs (lead guitars, backing vocals), Brandon Bruce (bass) and Pete Webber (drums) were doing. There are some tasty cuts to devour, such as the Megadeth-ian/Testament-ian "Betrayed By Technology" with a catchy chorus recalling "Human" Death, or the very "Eye Of The Beholder" Metallica "Ritual Of The Mind" but the best is the closing "Don’t Do It" structurally very reminiscent of Machine Head’s "Violate" (which was a tremendous progressive achievement on the latter’s part). The quartet is tight as lamb’s testicles in Syberia.

On the other hand, "V" has frustrating generic thrash songs a’la Slayer’s "Epidemic" (Phantom Force), riffs we’ve all heard a thousand times in different configurations. Others tend to wear their influences too much on their sleeves be they inspired by Death’s "1000 Eyes" (Cosmetic Surgery) or Testament’s "Trial By Fire" (Panpsychism), indeed, in the latter case the riff and structure is a little too similar to the fairly fresh Annihilator’s "Lip Service" (came out this year!), so, barring a conscious cooperation with Jeff Waters (same track number, 9!), well, you know where I’m going with this.

On its own merits, technically and musically, "V" is a good record but it is beset by both tendency to coast on "same ol’ thrash" formula and owing a little to much to their inspirations. Finally, the overall feeling is as though they have put it together in great rush, having seemingly taking their time writing exclusively the closing track, the tellingly named, "Don’t Do It". Hopefully, this is not where Havok intends to remain creatively and they will yet surprise us.

LUSTRE – The Ashes Of Light

John Mayall with Joel McIver – Blues from Laurel Canyon: My Life as a Bluesman