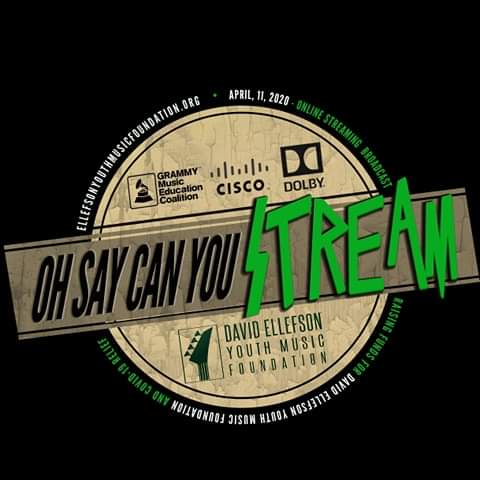 On Saturday, Apr. 11, David Ellefson Youth Music Foundation, the nonprofit charity started by GRAMMY-winning Megadeth co-founder and bassist David Ellefson, will partner with GRAMMY Music Education Coalition to host "Oh Say Can You Stream," a livestream online fundraiser, powered by CISCO WEBEX to raise money for the "SCHOOL’S OUT" initiative which provides online lessons, instruments and gear to kids and aspiring musicians during quarantine, and other COVID-19 relief charities.

Ellefson will also perform a remote acoustic set with his eponymous solo band, featuring Italian guitarist and drummer Andy Martongelli and Paolo Caridi. The performance will include their new single “Simple Truth” out Fri., Apr. 10 on digital outlets, with all proceeds going to the Italian Red Cross Covid-19 relief efforts.

“When we launched the SCHOOL’S OUT initiative, we realized the immediate impact it had, as we got almost 1000 applications in the first week," says Hazaert. "We very quickly realized this was something we needed to take to the next level, and really began serious fundraising efforts to increase the scope of what we were able to do.”

“When one person suffers, we all suffer, and this is an unprecedented moment in history when all of us around the world are united for a common cause, especially in the music community," adds Ellefson. "As I saw so many of my friends who are “hired gun musicians,” session players, etc., all losing so much work, we all saw months of work vanish before our eyes. We thought we could create an opportunity to really do some good on several fronts. So many of our friends have been so generous with their time, and it’s a wonderful initiative to be able to not only give kids something great to hold onto, but also keep some of our friends working in this uncertain time.”

The David Ellefson Youth Music Foundation is an affiliate of the GRAMMY Music Education Coalition (GMEC), a collaborative movement whose goal is ensuring all students in public schools across America have music education.

“Our Coalition of supporters of public music education numbers more than 70 organizations, and the David Ellefson Youth Music Foundation joined us early on," says GMEC Executive Director Lee Whitmore. "David’s enduring support for what music does in students’ lives is unwavering. Oh Say Can You Stream has an amazing lineup. It will be awe-inspiring, supporting kids, music education, and helping provide COVID-19 relief in our communities.”

For the full lineup and details, please visit ellefsonyouthmusicfoundation.org.

The David Ellefson Youth Music Foundation has also set up a fundraiser in support of the SCHOOL’S OUT initiative. Donations can be made via FundRazr.