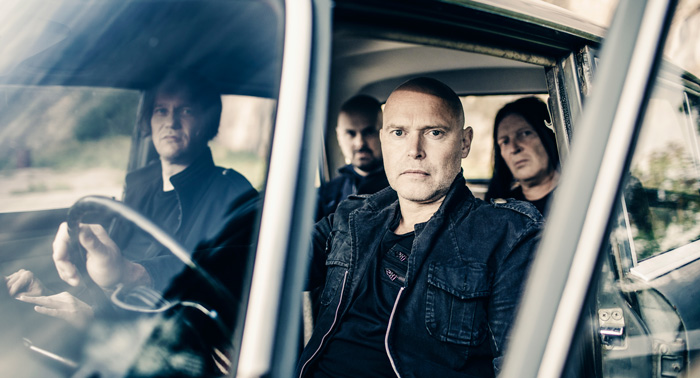 CONCEPTION: New song "By the Blues" out

There are things in life that can guide you through both, good and bad times alike and if there is one that probably a majority of people out there will agree on, it is certainly music. For a band with a close and direct relationship to their fans, that bond is even more important and precious. That’s why just a few weeks away from the release of their much-anticipated album State of Deception (out April 3rd), Norwegian prog metal legends CONCEPTION are more than ready to present their upcoming full length and have another special foretaste for all the old and new fans out there today.

According to singer Roy Khan By the Blues is “a song about making denial, a way of survival or a passage through everyday life." And in this case, it was one that came to him and guitarist Tore Østby almost naturally: "Not only did the music for this one come easy, but even the lyrics from the demo jam are very close to the finished version.” It’s an impression that Østby can only confirm, as he says about the song’s origins: “Roy and I did a few songwriting sessions in a cabin up in the Norwegian mountains. The main guitar riff spontaneously introduced itself through my fingers one night when we were sitting up there, and the rest of the basic music, vocal melodies and even the guitar solo followed automatically for us from that moment. Wish songwriting always would be that easy!”
After Waywardly Broken, By the Blues is the second song released off State of Deception. Give it an extensive listen here to even increase your excitement for the band’s long-awaited upcoming album that’s out on April 3rd.

By the Blues can be downloaded and streamed here:
https://orcd.co/conceptionbytheblues

State of Deception Tracklist:
1. In Deception
2. Of Raven And Pigs
3. Waywardly Broken
4. No Rewind
5. The Mansion (featuring Elize Ryd)
6. By The Blues
7. Anybody Out There
8. She Dragoon
9. Feather Moves (remastered)

Conception: The story so far
The release of State Of Deception, Conception’s first full length album in over 20 years, marks the full-circle evolution of the band. It is an un-rushed yet seemingly fatalistic journey:
Formed in the late 80s out of the industrial Norwegian town of Raufoss, the band featured Tore Østby on guitar, Roy Khan on vocals, Ingar Amlien on bass and Arve Heimdal behind the drums. Naming themselves Conception, they were to immediately display their propensity to operate ahead of the curve by self-releasing their debut album The Last Sunset a process which took considerable effort against an industry backdrop totally unaccustomed to such independence of spirit. A deal with Noise Records and three subsequent albums followed, amidst a host of European and Japanese touring, the combination of which went a long way to securing the band’s iconic status and cult following. And then, nothing…

Conception never formally disbanded, never fell out amidst a background of seething resentments, or embittered personalities. Instead, they simply explored other musical avenues. Tore founded progressive metal band ARK, Ingar formed black metallers Crest of Darkness, whilst Arve enjoyed a stint in blues rock outfit Nickels & Dimes. It was Roy who went onto most obvious public recognition as frontman of melodic hard rockers Kamelot. As time elapsed, and as Roy in particular experienced significant burn out under the unrelenting glare of the public eye, it appeared this particular musical chapter had closed for good.

Yet that was to reckon without the ambitions of the original band line-up, who had remained friends throughout the intervening years. A 2018 reunion, intended only for the enjoyment of the band members themselves, went viral when rehearsal footage leaked online. A Norwegian prog metal snowball was set in downhill motion. A whirlwind eighteen months ensued, encompassing a successful crowd-funding campaign, a near-fatal financial implosion (the crowd-funding income sank amidst Pledge Music’s much publicised bankruptcy, though the band worked overtime to honour fans’ investment), the re-presentation of Conception to a new generation of fans, a brand new EP (2018’s My Dark Symphony), a triumphant live return to their hometown of Gjøvik, and a hand-picked selection of rapturously-received festival appearances. With their trajectory clearly in the ascendancy, it was only a matter of time before conversations about a headline tour and full album release were to be turned into realities.

And so April sees the release of State of Deception, a nine track tour de force which lead singer Roy Khan describes as ‘probably the best thing I’ve ever been involved in!’ The bar is set high then, but the band are more than happy to do so, as guitarist Tore Østby explains; ’If we didn’t think we were capable of surpassing our previous work, we wouldn’t be here! We’re super proud of every single track on this album.’ And rightly so, from the raucous riffage of No Rewind to the soaring tension of The Mansion, this is an album that eloquently showcases the band’s infamous musical breadth, as much fuelled by a unique blend of classical and even jazz inspirations, as those of the rock and metal influences they wear most evidently on their collective sleeve. ’We’ve always said that we have a need to do what we feel is right for our music,’ Østby explains unapologetically, ’We couldn’t limit the musical scope of Conception even if we wanted to.’ Its a boundaryless approach that is to the band’s immense benefit, and one which is mirrored also in their business approach.