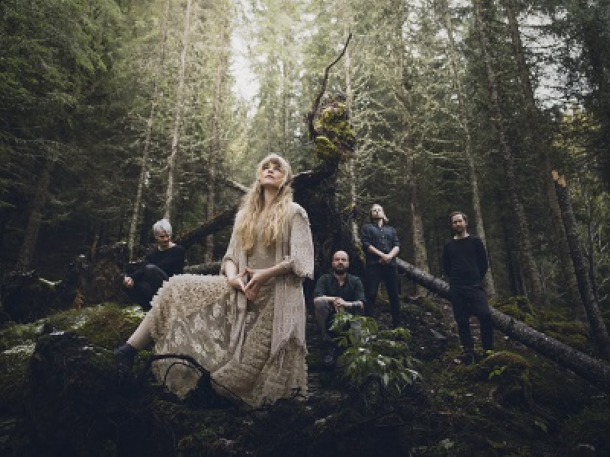 A "huldra" is a mythical creature emerging from the rich traditions of Norwegian folklore. These ancient female spirits are known for their radiant beauty and seductive voices. Although sometimes described as benign, especially if treated well, there is often a dark undertone to their erotic powers that can easily lead men astray.
GÅTE ("Riddle") have now given this being of legend musical shape with their upcoming single aptly titled "Huldra". Opening with a hypnotic tribal rhythm driven by percussion and an ominous susurrus of strings, soon the clear bell-like soprano of singer Gunnhild Sundli calls out – searching, beckoning. In short interludes other voices can be heard as from a distance or through a dense fog. Tension rises and the dramatic build-up is suddenly released in an outburst of vocals, electric guitars and drums. The unmistakable sound of the Norwegian fiddle joins this musical telling of a story.

For those, who have followed GÅTE since their founding in the year 1999, some of the elements of "Huldra" will sound familiar. After all these years, the unique blend of rock and traditional Norwegian music still sounds as fresh and thrilling as in the early years between 2001 to 2006. Yet this new single sets a darker tone and adds a harder edge to GÅTE’s tramark sound.

Those, who will inevitably draw comparisons to WARDRUNA, HEILUNG, and the more sinister side of EIVØR due to some similarity in the use of rhythmical elements or vocal phrasing will all have a point, but – especially, if they are from outside of Norway – might easily miss the fact that GÅTE have been drawing from traditional music and transforming it with modern means into something new right from their beginning.
Founding member, Sveinung Sundli learned to play the fiddle and piano at an early age and his sister Gunnhild Sundli started to sing at the age of 6. And, they didn’t really have a choice, coming from a family of musicians with clear ideas of their future paths. The traditional schooling was mandatory, but luckily, they both embraced with great passion and love. Later the transition from a basement rehearsal room to the biggest stages of Norway happened fast for GÅTE. Only three years after their founding, their debut album "Jygri" went straight to the top of the Norwegian charts and won the Norwegian Grammy for Best New Act in 2002. Their sophomore full-length "Iselilja" (2004) was not only enthusiastically received at home, but also got noted abroad and managed to transcend genre borders too as witnessed by a full score of 7/7 in Metal Hammer, Germany. Despite continued success as one of Norway’s hottest young acts, spectacular live-shows, and tipped to be the country’s "next big thing" on international markets as well, GÅTE went on extended hiatus after the release of their live album "Liva" (2006) as the members of the band were successfully following individual career paths.

It was therefore a brilliant surprise, when GÅTE unexpectedly returned in 2017 and the
much loved as well as critically acclaimed band embarked on a triumphant tour in front of sold out venues. The new incarnation of GÅTE retains the core of the original band with Gunnhild Sundli, Sveinung Sundli and guitarist Magnus Børmark – who are now joined by drummer Jon Even Schärer and Mats Paulsen on bass.

Not content to simply rest on their previous laurels, GÅTE released the EP "Attersyn" in November 2017 and about a year later their acclaimed third studio album "Svevn". Both releases were the result of an intense collaboration with Norwegian folk legend Knut Buen, whose discography includes the "Hardingrock" album on which this master on the Hardanger Fiddle joined Norwegian black metal icon Ihsahn of Emperor fame.
For GÅTE, Knut Buen contributed as a brilliant storyteller and lyricist, which is now being continued with "Huldra". The single also shows the Norwegians forging ahead in exploring new dimensions of their original sound and widening their stylistic rage – a process that will reach a new creative level on GÅTE’s forthcoming studio album number four – of which "Huldra" offers a first delicious taste.