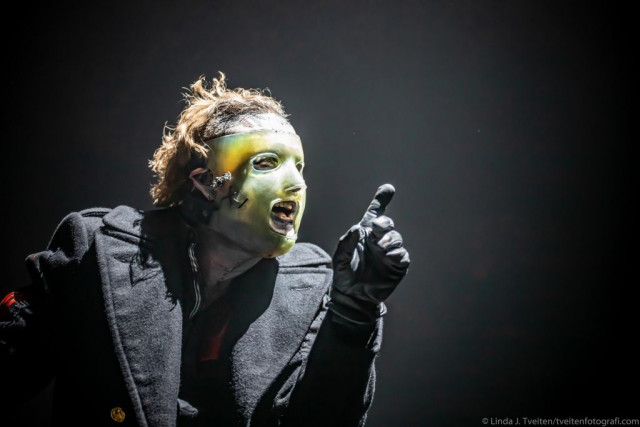 The last Behemoth concerts I attended were at big stages outdoors with awesome sound but lacking the darkness that makes flames look cooler, for example. So the full impact of the band’s image got enhanced at this huge indoors scene. In addition you have the Telenor Arena sound that made it as good as possible. The show started with the more Black Metal songs of their latest album called I Loved You At Your Darkest and because of it one gets to think about how the band actually started as a more raw Black Metal act that got shaped by the awesome Polish Death Metal scene until they became a precise metal machinery with a sound of their own. So those old vibes were brought back with songs from Satanica and Evangelion, but still I wish I could see songs from Zos Kia Cultus and Thelema.6 which are the albums I like the most. It has been a long while since I saw it live. Still the newer blackened songs are awesome. A nice addition to this tour was the performance of Behemoth’s latest single Rom 5:8 which video was premiered earlier this year.

So there is the unavoidable fact that they play together with Slipknot, something that no one would have thought to ever be possible when Behemoth was paving his way as a pretty awesome Polish Death Metal act that appealed to many radical metalheads. Many of them must have gotten used to see Behemoth as a brand and something more than a pretty good Death/Black Metal act. Many of them must have seen Slipknot for the first time now.

As a part of ever becoming bigger Behemoth got to be a part of the Knotfest. A festival Slipknot have been putting together since 2012 in big cities like Tokyo, Mexico City, Bogotá, Quebec and some other main cities in the US with an attendance in the tens of thousands. Luckily the guys in Slipknot have pretty good taste and got Behemoth not only for their Knotfest, but for their European tour because what we got to see in Oslo is just a taste of what the Knotfest is all about. Corey says so himself, they do respect Behemoth and name them as a big influence and that’s excellent.

I think it’s awesome that the Slipknot guys gather pretty good and respectable metal bands for their own festival. This way the new generations that Slipknot attract get a pretty nice introduction to heavy metal and other metal genres seeing the performance of legendary acts such as Judas Priest, Testament, Accept, Unleashed and Arch Enemy among others.

When it comes to me personally I have always combined Slipknot with every other extreme metal because I don’t feel I’m downtuning the brutality level since the percussion is hard enough to keep me satisfied. It feels right! They play hard for being commercial. I listened a lot to Slipknot when I was younger, but I kind of lost interest in the more recent albums. So knowing a new album was going to be the focus I had neutral expectations, but I was pleased to find that every right feeling of old was back. So We Are Not You Kind, was the right kind anyway making this the best Slipknot concert I have attended in recent years mainly because I didn’t feel I needed to stop a bit and wait for the slightly mellower and a bit more monotonous songs to finish to feel the energy again. It was the right rhythmical mix of Thrash, Grind, Hardcore, Death, Electronica and Pop aka Nu metal. The 2000’s Rage Against The Machine, Coal Chamber, P.O.D, Korn vibes all with the teenager anxiety and mental chaos that made much more sense decades ago.

So I enjoyed it thoroughly because I mean why not to have 3 persons doing the percussion? Why not accelerate to grind speed at times before the melancholic cleans unfold? And then time the pyro just right so you get the full impact of the whole riff! It’s a powerful sound and show like only big sellers with big budgets can. Many of us even got the nostalgy trip included and all. All that is left is to hope for a mid-size version of the Knotfest next time in Oslo. Not all hope is gone.