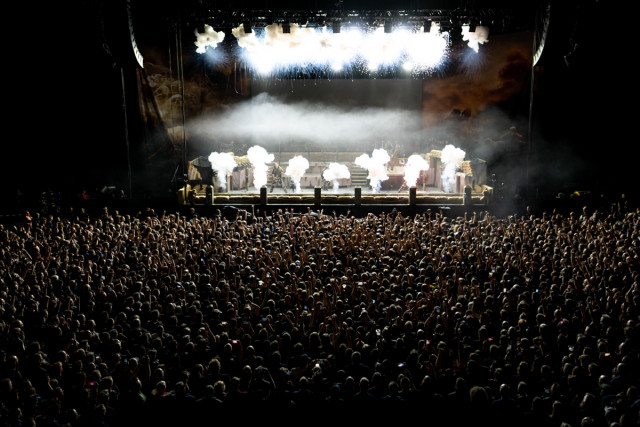 SABATON live at Spektrum Scene, Oslo, Feb 2020
Photo by Anette Skutevik
Cold Sunday evenings in Oslo are a good time to attend concerts, especially when it’s the last one of a rather big tour, namely "The Great Tour". The tour started mid January 2020 and consists of Sabaton as headliners, and Amaranthe and Apocalyptica as support. And tonight the last show took place in Spektrum Scene in Oslo, probably one of the few stages who can now host the immense sabaotnian production. More about that later.

Due some misunderstandings with the accreditation and then some weird detour to use entrance 10, but only if you figure out the right passage between fences, else you cannot enter entrance 10 even if you’re in front of entrance 10 (?), I only got to see about three songs of Amaranthe’s concert. Which is not a problem. I saw them before, I tried getting to understand the music, I failed then, and I failed tonight as well. It just jumps too fast into very unconnected directions. I also cannot give any bonus points to anyone using a Queen song the way they do. The only bonus is for the clean male vocals.

The Finns in Apocalyptica are a band that I think I only saw live in Finland and outdoors. So I was curious what they’d be able to deliver on such a big stage and I wasn’t by any means disappointed. Actually, there was a detail that I could comment on: the fact that the light guy completely ignored the projections and used the full roof lights to cover the stage, letting you guess what might happen in the background. Good thing it wasn’t an important story, but it still felt like a pity for the animator. Besides that, only thumbs up to the show, both musically and the stage presence. I think their drummer would gladly invest in a portable kit if there’d be one that would allow him to perform his music. Watching guys playing cellos held behind the neck or while laying on the floor was something I didn’t think people would do. The Finns have recently released a new album, Cell-0, which I think it’s a rather intense one, but I only had the chance to give it a few tries. The fact that they boldly started with the new stuff makes me even more curious to explore it in depth. When they announced they’d play a cover of Rammstein’s ‘Seaman’, I was rather excited….but that diminished really quickly when Amaranthe’s singer ruined all the intensity of that song. She has a lovely voice. But not a dramatic pitch. And that song is so full of drama…She worked a bit better for ‘I don’t care’, song on which I think they also had one of the Sabaton’s guitarist on a fourth cello. But the crowd surely got on fire when ‘Seek and Destroy’ was played and the entertainment followed way more vigorously with classical songs – which Norwegian doesn’t get chills when hearing ‘The Hall of the Mountain King’ – and it all ended up in a very intense performance of ‘Nothing Else Matters’. However that song was written and perceived by everyone along the history, I believe it was meant for cellos.

A huge curtain covers the huge amount of work needed to set up the final details of the massive Sabaton show. We already saw the barbed wire and the pyro ‘poles’ or holes and the trenches like decorations on the side of the stage. The tank was quickly built to the right of the stage and I just realize I haven’t figured if the drumkit is still inside the tank or separated. Less important. The show started with a bang and opened with a crowd pleaser, ‘Ghost Division’. Pyro, explosions, headbanging, synchronized headbanding, laughter, good mood, jumping, jokes…the show had it all. To my surprise, it even had Apocalyptica guys joining on stage for what would be the second part of the show and performing about 6 songs together with Sabaton. And before that, all three of Amaranthe singers joined for one song. I’m still confused about that one. Anyway, the cellos made the music all of a sudden more vibrant and it would actually be cool if they’d bother at least one song recorded like that in the studio.
One very important thing I have to say about Sabaton is that I happen to have seen them for many years now and even if their music doesn’t fit with my taste, they do surely have my respect for how far they have come wheni t comes to their stage show and the whole machinery behind it. Both the hours of practise as a band and the amount of work from everyone involved in the whole tour.
The short break brought a rather lengthy encore, with more of the fire and good mood and stage madness. I should remember to attend final tour shows more often. It’s not that artists don’t usually perform at their full capacity, but on the last evening there’s an extra level of fuckitall that gives one a ton of good vibes and makes that cold dark winter evening way more bearable.
Photo galleries by Anette Skutevik are also uploaded to our webpage
AMARANTHE – https://www.eternal-terror.com/gallery/view.php?id=3951
APOCALYPTICA – https://www.eternal-terror.com/gallery/view.php?id=3952
SABATON – https://www.eternal-terror.com/gallery/view.php?id=3949
PREVIOUS POST