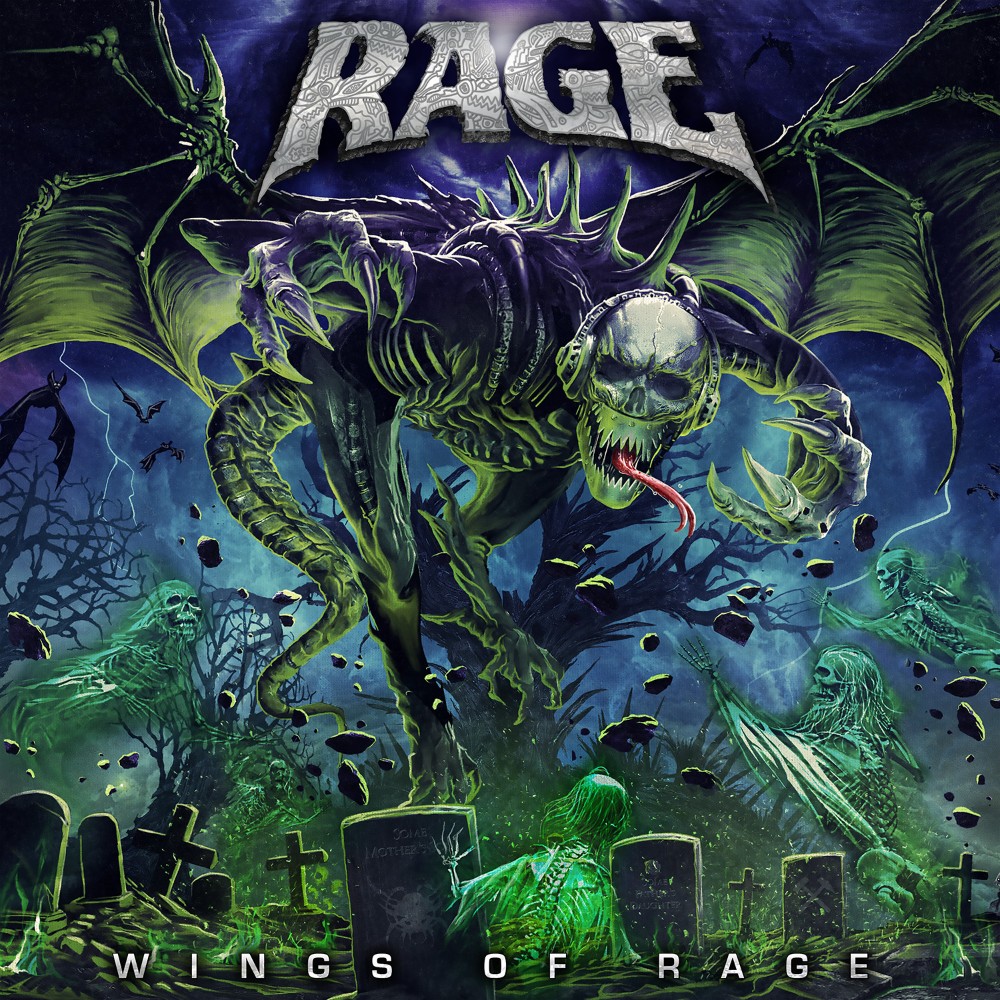 Having released a whopping 22 full lengths, and having gone through multiple lineup changes the Herne, North Rhine-Westphalia-based German ensemble were more than ready for a summary album and that’s what the apptly named "Wings Of Rage" is all about, succeeding both as a career summary (the stylistic variety informs of the past better than a quick browsing through their discography) and as an excellent disc in its own right.

Started under the name Avenger in 1983, according to Encyclopedia Metallum, their 1985 debut album, "Prayers Of Steel" suggested a Satanic lyrical direction and maybe to distance themselves from such associations they changed the name to Furious Rage and finally Rage for the "Reign In Fear" (1986) album. Rage is reportedly a legendary outfit, spanning nearly 37 years of power/thrash metal history. Yet, until this here, "Wings Of Rage" I had never heard a single note from them. I vaguely remember reading some review of the "Higher Than The Sky" EP (1996) where the reviewer highlighted similarity to Megadeth, but I had never checked it out. So, when given an opportunity to sink my metal ears into their latest offering, one which was promised to sum up their whole existence, to boot, I gladly took it. Consequently, I look at this album as as separate work from a legend I never knew before.

It’s incredible how fresh and powerful this record sounds from such an old band! The mainman Peter "Peavy" Wagner (vocals, bass), Marcos Rodríguez (guitars, additional vocals) and Vassilios "Lucky" Maniatopoulos (drums, additional vocals) slash and thrash with the best of him who invented the phrase in 1985, David Scott Mustaine’s stylings all over the not-so-coincidentally named "Let Them Rest In Peace", "Chasing The Twilight Zone" (complete with the Rod Sterling’s "Twilight Zone" theme sample as intro/outro) or "Blame It On The Truth" with unique and innovative riffs and melodies, while the pure Helloween meets Blind Guardian power metal meets Iron Maiden-ic traditional heaby metal spills from "Tomorrow" , "True" or "Don’t Let Me Down". And, really, never mind the genre references, this is just exciting, throbbing and explosive heavy metal the way we’ve all grown to love and trust to pull our depressed carcasses out of the deepest caverns of our self-imposed personal hells.

The album sports even a blast from the past as the fantastic "HTTS 2.0" is an updated version of the classic "Higher Than The Sky" from the "End Of All Days" (1996) album. But the most interesting are the subtle influences of Gothenburg melodeath of In Flames or Arch Enemy in the aforementioned "Chasing The Twilight Zone" and "Tomorrow", or the The Scorpions-ian excellent ballad "Shine The Light" although the most ambitious and genre-defying track has got to be the closing thrasher "For Those Who Wish To Die" with the sexiest riff on the album recalling Nevermore. There’s just so much they did right on this disc it’s difficult to talk about the flaws, but they do exist.

Some of the tracks, such as the opening "True" or the very experimental "A Nameless Grave" highly reminiscent of Megadeth’s "Poisonous Shadows" or the little pointless short instrumental "Shadow Over Deadland (The Twilight Transition)", pale in comparison to the rest, although, thankfully, they do not detract from the flow of the album, especially given the fantastic production.

Nearly thirty-seven years into their career, the Germans still Rage like bands 1/3 their age. The songwriting may not be perfect but most of it is as impressive as, say, Nevermore’s "Dead Heart In A Dead World", Megadeth’s "United Abominations" or Iron Maiden’s "X-Factor", warts and all. I highly recommend this disc to every lover of heavy metal regardless of the genre.