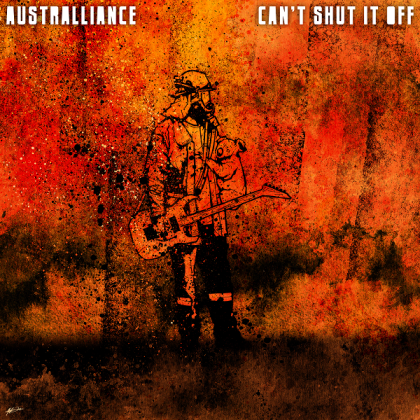 Moved by the devastating Australian wildfires,  Heavy Metal musician KEVIN STORM, has recruited a plethora of fellow musicians, including VULTURE INDUSTRIES frontman Bjornar Erevik Nilsen and Dark Essence Records artist and video producer COSTIN CHIOREANU, to form AUSTRALLIANCE to take part in a single released to raise money for the Wires Wildlife Rescue (https://www.wires.org.au) which will receive any and all proceeds from the single.

You can buy, or donate as much as you want for the single, titled "Can’t shut it off",  directly from Kevin on Bandcamp at www.kevinstorm.bandcamp.com

As well as from all the usual streaming and downloading services via  https://darkessencerecords.fanlink.to/Australliance

Romanian musician, artist and video producer COSTIN CHIOREANU, has also created a video for "Can’t shut it off" which can be seen at https://youtu.be/wXnuXmsY-lI

According to Kevin the song "starts as the loudest scream of despair yet ends with a sigh of hope," and he explains how not just fellow musicians, but also major companies involved in the metal scene, including Norway’s Dark Essence Records, and the metal community in general, rallied to his call to produce produce "Can’t shut it off":

My name is Kevin Storm, I am a professional heavy metal musician that tours the globe and last Sunday the news of Australia’s wildfires had me in tears. I couldn’t sleep and wrote the lyrics in 5 minutes, and the day after started recording a charity song during a 10-hour live stream. After this I started inviting fellow musicians to contribute.

The whole thing grew out of hand as the community started to gather around it and in one week we had 16 musicians, some VERY well known in the heavy metal community, who all contributed to a heartbreaking song that is mixed in one of the best recording studios, backed by major companies And so much more is happening in the campaign.

The song ends in a 24 piece-choir and musicians taking part include:

Drums for "Can’t shut it off" were edited by Daniel Medley at Ten South Sounds and was mixed by Bjornar Erevik Nilsen and Mastered by Herbrand Larsen at their Conclave and Earshot Studios in Bergen, Norway.