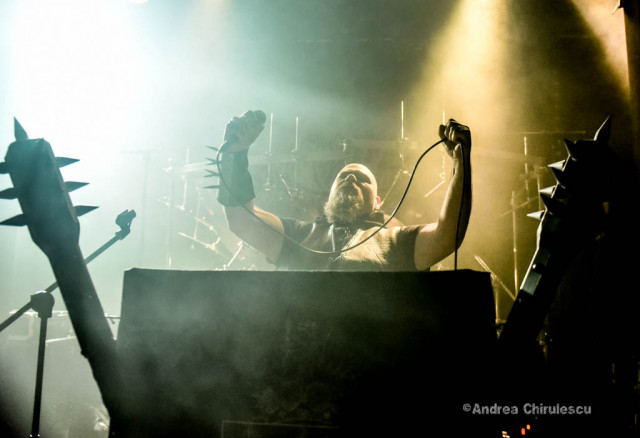 Mortem and Ragnarok marked the release of their new albums the 20th of December. I was pretty looking forward to experience Mortem live since it was one of the albums I liked the most in 2019. Mortem’s music combines all the atmosphere and excellent musical performance that you would expect from talented musicians who play in Arcturus and 1349. The band was formed in 1987 by Marius Vold (Thorns) and Steinar Johnsen (Arcturus). The band was on hold for decades and it was revived in 2017. (more details about the band are to be found here).

The release show did not count with Hellhammer’s presence unfortunately, but instead we got to see Sekaran on drums. I had seen him previously when he was still playing with Dødheimsgard. He nails the complicated DHG Avantgarde songs as well as the more industrial ones with the programming drum like sound so this was no challenge for him. Although it is difficult to get to play like Hellhammer when it comes to his very own personal signature drumming, so I still hope to see him performing his own creations with Mortem some day in the future. Or else the strings were awesome to witness, and all in all it was a great show. The fact that the singer had a huge podium was out of the ordinary and made the concert something to remember. At first I thought there was going to be some ritual of some sort, but then it actually gave the appearance of a satanic orator to the vocalist of some sort something different for a change. I truly appreciate the effort that requires to set enough time aside to carry with all that is needed for a side project for busy touring artists and despite the difficulties I hope to see more of this in the future.

I have seen Ragnarok many times during the years and their live shows are always fun. They give pretty powerful and solid performances. In addition, I think the drumming stands out as pretty hard and forceful so no soul is left untouched in the audience. They played a varied set with old songs like In Nomine Satanas, Blackdoor Miracle and brand new ones their latest album Non Debellicata. One of them was Chapel of Shadows which has Swedish BM vibes combined with a good dose norwegianess making a pretty awesome blend that is to be found elsewhere in the album. On the other hand The Great Destroyer which is much more orthodox in its sound. With Non Debellicata, they just proved they keep getting better performing familiar sounds with a good dose technicality and raw force.