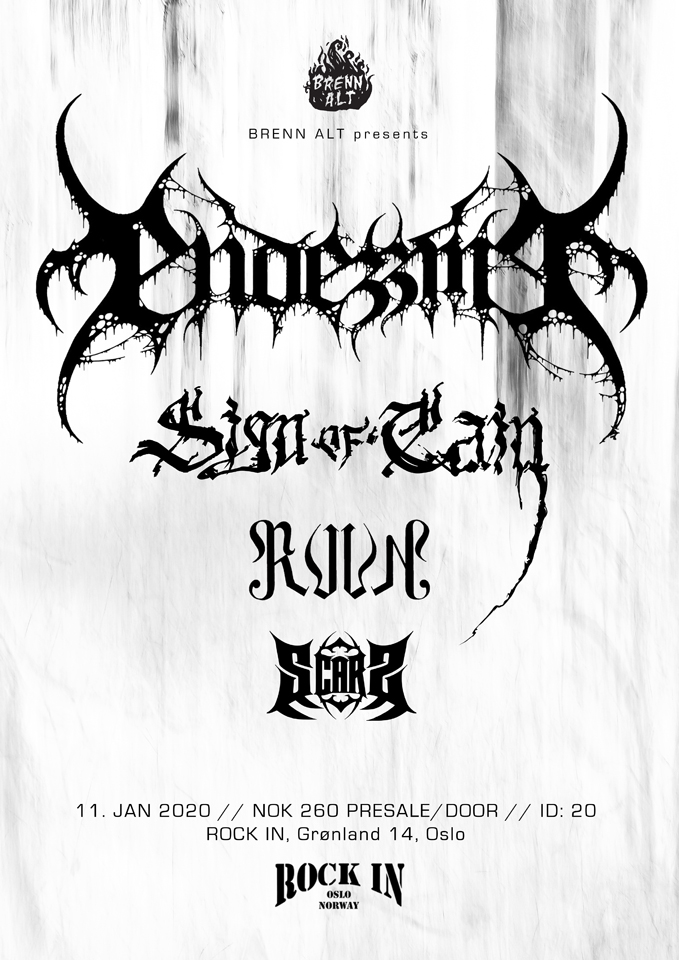 ENDEZZMA
Endezzma was founded during the grey tunes of the 2006 autumn. A gathered stronghold of old nekro misfits of Morten Shax and Trondr Nefas made a morbid woe of creating a oppressive cult movement known as Endezzma,arising like a phoenix out of the ashes of Dim Nagel . The members of the cult would unite their negative forces against life.
Endezzma transfer old atmosphere combined with eerie seductive compositions into what people want to rate or should rate as 1st class sublime nekro requiems!
The band released the "Alone" EP in 2007 and did a handful of selective shows around Europe same year. The debut full length album "Erotikk Nekrosis" was released in 2012 , the same year marked the death if Trondr Nefas.
Like an old serpent with fresh poison Endezzma crawled out of the stellar darknes and it’s vicious embers to form what today is know’n as THE ENDEZZMA !! the world known as death! The 5 horsemen that was baptised into the cult would bear the names of Morten Shax, Malphas, Nihil, Aske & Skriu …. And so the band signed a contract with Pulverised Records and made the 7" ep "Morbus divina" and the second full length album "The Arcane Abyss" in 2017.

SIGN OF CAIN
Sign of Cain was created by vocalist and guitarist Tomer Hasenfratz and arised somewhere in the autumn of 1999. Many songs were written and composed during a 2 year period, Tomer hooked up and played with several members, having the first official band rehersal around the spring of 2001 at Tomer’s highschool music room. But after a while things didn’t go the right way for Sign of Cain and it was put to rest in March 2002 (When the band evolved into Viscera Trail).

Sign of Cain was resurrected in January 2011 by Tomer along with Ben Kelly Solomon, with a clear vision to make all that was ever so good in old school death metal, and personally influenced Tomer musically.

The idea of resurrecting came somewhere between 2007 and 2008, Tomer started writing music again that ranged from different types of the broad oldschool death metal and doom metal spectrum and was looking for members to fill in the line up.
After a few years, in late 2010, Tomer linked up with Bass player Ben Kelly Solomon and started working on his materials with him.
Soon after in January 2011 they started recording the Debut album.
In early 2013 Tomer teamed up with Tomas Lindberg, Tuval "Hati" Refaeli and Tomy Minas, then later on with David Mauritzon in 2014 to complete the line up.

The debut album "To be Drawn and to Drown" includes material written back in 1999-2001.

RUUN
A progressive Death Metal trio from Hønefoss that brings catchy riffs as well as brutality on stage.
They released their debut EP "Atheos" this fall, check it out!

SCARS
Scars were founded by Ole in 2013. The idea was to create more straight forward and catchy, melodic metal, then he was usually doing. So after recording In Constant Suffering he needed to get a band together for live performance and further recordings. He gathered old friends and bandmates and started rehears right away. Ole from Mecalimb, Morten from Witchammer, Cato from Jim`s Garage and Torben from Mecalimb became ScarS at the end of 2014.