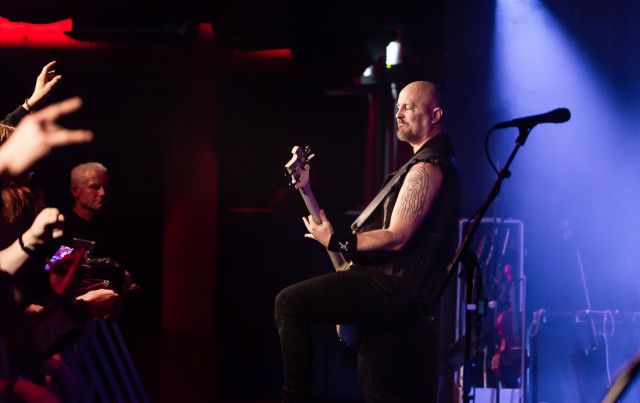 Einherjer live in Oslo
Photo by Terje Ottesen
There have been many extreme concerts arranged at Røverstaden now. 1349 delighted the audience with new songs from their latest album recently, and the polish Death Metal machinery of Vader and Hate were also performing at this venue. The next show to look forward to is going to be Marduk, the 13th of December. The good thing with the venue is that it is pretty wide so one can choose from lots good vantage points and the sound is good.

The latest show I attended was folk/viking oriented. The evening shows started with the Germans Dawn of Disease. Their sound are pretty Swedish DM oriented. Their set contained a vary arrange of tempos and influences within Swedish old school and Melo Death. They have recently released a new album called Procession of Ghosts which is less old school oriented as previous
albums. Its sound is well produced and neat and they have these great viking riffs you can’t help but headbang along evoking great moments in vein of Amon Amarth.

After a good dose of Death Metal it was time for Einherjer which were my favorite band for the night. I like a lot their style and the fact that it has lots of groove. Their set had many songs from their latest album Norrøne Spor. Songs like Spirit of a Thousand Years which is pretty black n’roll; Mine Våpen Mine Ord which is pretty folk and true to its roots and Kill the Flame a pretty catchy song. They also played old songs from their first album Dragons of the North and Dreamstorm and other songs from their musical creations in between. It was a pretty enjoyable show and I look forward to see them again.

Månegram live in Oslo
Photo by Terje Ottesen
The headliner was the Swedish Folk act Månegarm which play a folk style that it is pretty lively and dynamic like it is common in the genre, but it also has its subtle and elegant moments given by the sound of the violin. The vocals that aren’t precisely battle cries and more composed to fit smoothly into the songs’ melodies. There’s a considerable amount of musicianship behind this band so the songs are well crafted. I really liked the drumming performance live as well.There were many songs taken from their latest album Fornaldarsagor. The album counts with an epic artwork and music to match it. They played Slaget Vid Bråvalla which has a pretty beautiful atmospheric start and celtic vibes. Sveablotet which is blackened and that together with the song called Blodörn brings to mind a Swedish band I love called Allegiance. They also played Hervors Arv which is a song fit for the moshpit.

Both Einherjer and Månegarm show how different the approach to the same genre can be, specially taking into account that there are lots of common influences between the Norwegian and Swedish scenes. So it is a pretty interesting musical experience to see them in a row.

For all people interested in Folk/Viking there will be a festival organized by Månegarm in Nörrtalje, Sweden. It will take place the 21-22 of August next year and the line-up counts with Moonsorrow, Einherjer, King of Asgard, Grimner, Kråkslott.