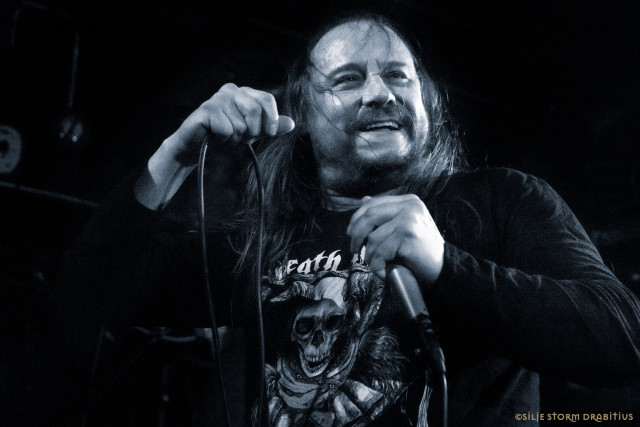 Swedish Death Metal legends Entombed, together with Aborted and Baest manage to draw a decent crowd in spite of having to compete with Killswitch Engage and Revocation who were playing next door.

The concert started with Baest which delivered a pretty energetic performance. They play well executed Death Metal and offer pretty good and enjoyable riffs heavily influenced by the American DM sound. They are pretty well established in Denmark and have released a new album called Venenum recently through the pretty well known Century Media Records. If you are interested in the band you may as well watch their musical journey that has been made into a documentary called Den Satans Familie which has been aired on Danish national television.

My favorite act of the night was Aborted. I like the blend of Gore, brutality and technicality. The combination of tonalities and tempos in every song makes their sound pretty dynamic and enjoyable. They are one of those bands who have a distinct sound, awesome solos, a pretty powerful bass and count with a pretty talented drummer and vocalist. The set was pretty varied with songs from their latest album TerrorVision all the way through to their older stuff with songs like Sanguine Verses (…Of Extirpation) and The Saw and the Carnage Done that are pretty awesome. Although I had already seen the band this summer, to see them at John Dee was a different experience because you get to see them perform closer than in most open air experiences and that is pretty interesting.

The headliners for the night were the Swedish Old School Death Metal legends Entombed. They played classic songs like Left Hand Path, Supposed to Rot, but for the most part their set consisted of songs out from their latest album called Bowels of Earth, released back in August. This latest album thrash influence was pretty noticeable live. They did delighted the audience with the best of the grooves. It is always nice to see that the bands give all they have in a tour regardless of crowd size and venue. Hopefully we will have more bands of that caliber in the future, just not playing at the same exact day as other excellent acts so you are forced to make tough decisions.

All photos by Silje Storm Drabitius/Storm D -Live Photography. Link to each gallery