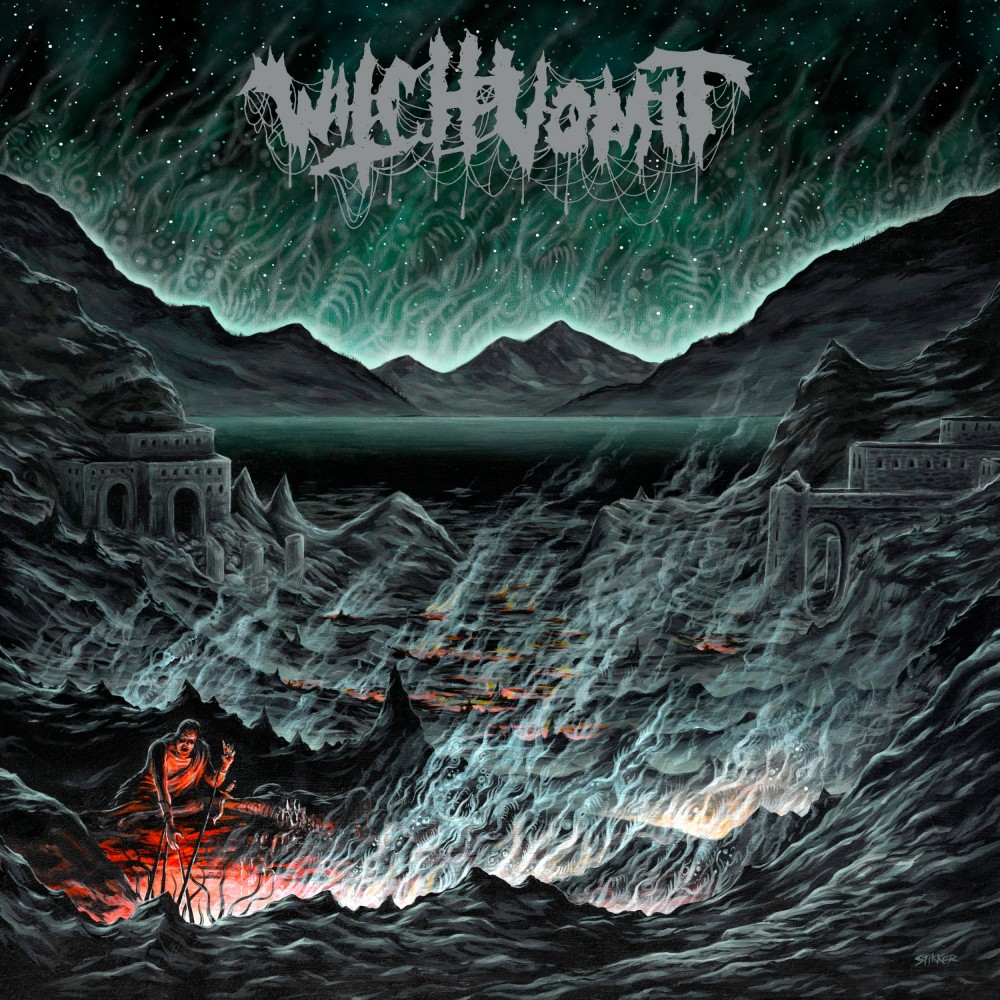 The 2nd album from the Oregonian death metallers brings a barrage of flawed old school death metal in the vein of old Morbid Angel, Immolation or Carcass with a slight modern touch, plus the inconsistent production additionally spoils the fun.

Formed in 2012 as a duo of Tony "Tempter" Thomas (guitars, vocals) and Vincent "Filth" Van Dell (drums) in Portland, Oregon, Witch Vomit immediately released the rehearsal demo, "Drowned in Filth", on Headsplit Records, followed by "The Webs Of Horror" EP (Headsplit Records, 2014), the debut album ""A Scream From The Tomb Below" (Memento Mori, 2016) and "Poisoned Blood" EP (2017), where they switched to 20 Buck Spin which also released the subject of this review. For "Buried Deep In A Bottomless Grave" Casey Lynch (guitars) and Jason G. (bass) complete the lineup.

I will say it right upfront: Witch Vomit is a horrible name. It does not carry the impression of an evil old dame who’s about to turn you into a newt for going to church wearing an old tattered Morbid Angel T-shirt (the ultimate blasphemy in both spiritual realms), but rather that of a disgruntled socially ostracized female senior citizen who emphasized her depression with too much Jäggermeister. And why vomit, instead of hurl or puke, why so dictionary polite?

The Portlanders’ music matches the name: loud, chaotic and occasionally interesting. If you take the opener, the beautifully named "From Rotten Guts", upon hearing a mixture of ancient Hypocrisy, Sepultura and Death with significant variation, you may think you’ve found something to put on your shelf, next to "Osculum Obscenum", "Morbid Visions" and "Leprosy", respectively, and the Morbid Angel-esque/Carcass-ian/Immolation-ary "Despoilment" may reinforce the feeling, but already the title track makes you rethink your position, a brutal, somewhat melodic but altogether quite unremarkable song. "Dead Veins" alleviates the disappointment a little bit but "Dripping Tombs" is even worse than the title track, plus the biggest flaw of this album, the production, with the mix somewhat decent at slow or midpace totally falling apart with speed and chaotic technicality, is painfully revealed. Yet the heavily "Fearless Undead Machines" Deceased instrumental, "Squirming In Misery" seems to be the epicenter of all Witch Vomit’s creativity, pretty original despite its obvious Obituary and ancient Paradise Lost references, for the best track on the album. And we are almost done, only so-so "Fumes Of Dying Bodies" left to wrap up in conclusion that for a band with 7 year history, 1 demo, 2 EPs and 2 full lengths, they sound remarkably unremarkable and inconsistent.

Aside from the botched production, the frustrating thing about this band and this album is that it is as though they were reluctant to incorporate more hooks and melody into their brutal and boomy old school death metal. This is sad, because Witch Vomit is far from derivative. They are simply not very good songwriters and they got a lousy production to boot, from someone who should have known and done better considering the bands he worked with before.

You may have noticed by now that I am hardly a fan of modern old school death metal, but I’d be willing to rethink my position if served anything even half as good as Death’s "Leprosy" or Immolation’s "Here In After", or even Obituary’s debut "Slowly We Rot". As of now, it seems the genre had its hayday in those late 80s and early 90s and no one seems to able to match, let alone top them.

As for Witch Vomit, they have much to change if they expect me to take further interest in their craft.

EMPYREAL – My Own Living Hell