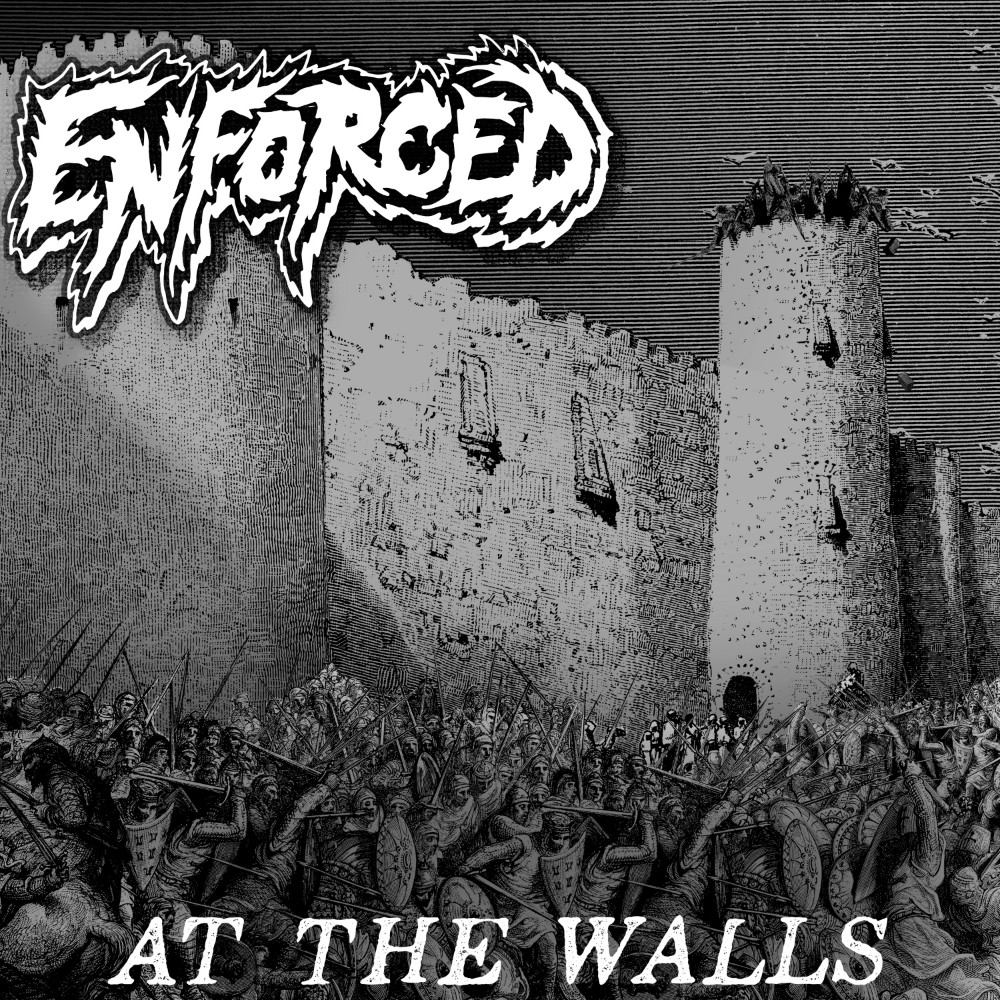 ENFORCED – At The Walls

The debut album from the Virginian ensemble is a mix of co-precipitated aluminium salts of naphthenic and palmitic San Francisco Bay Area thrash acids with crossover hardcore petrol of Cro-Mags, Biohazard and Hatebreed for the most volitile devastation since the Vietnam War.

Similarly to 1994 Hatebreed, the quintet (if you don’t count the drumming sessions on tracks 3-9 from Isaac Hullinger) featuring Knox Colby (vocals), Zach Monahan (guitars), Will Wagstaff (guitars/bass on tracks 5-9), Ethan Gensurowsky (bass on tracks 1-2) and Alex Bishop (drums on tracks 1-2), came out of nowhere. Having formed either in 2016 or 2017, they independently released a demo and "Retaliation EP", in 2017, before finally rightfully catching the attention of Los Angeles – based Andrew Kline’s (Strife) War Records. Having expertly combined the two releases and recorded two fresh tracks (Reckoning Force and Skinned Alive), armed with Bob Quirk’s fabulous production and Arthur Rizk’s razor – sharp mix (the latter known to fans of Power Trip or Cavalera Conspiracy), Enforced was poised to napalm the world into oblivion.

The album starts out with "Reckoning Force" which borrows from Death’s "Leprosy" but it becomes quickly clear that this is death/thrash metal in the vein of old Sepultura and Kreator fueled by crossover/hardcore of Cro-Mags, Biohazard and Hatebreed and with intelligent changes of pace from blazing fast to midpaced and "breakdown" slow. The next highlight is the excellent "Born Lost" which references 1986-1988 Slayer, too, at a various pace for probably the best overall composition on the album, since just as excellent, "Retaliation" sounds almost like a cover of Slayer’s "Mandatory Suicide". If I add the classicly melodic Megadeth-ian closer "Civilized Mind" and you look at the tracklist, it becomes apparent that, unlike Hatebreed on the fantastic debut "Satisfaction Is The Death Of Desire", the strength of which lain in short, powerful cuts, Enforced is most excellent on longer and more varied tracks.

Indeed, one of the flaws of this otherwise excellent album are the short, almost pure thrash tracks such as "Skinned Alive". While they do have some variation of pace, they mostly are in your face thrashcore anthems played at a "wham, bam, thank you, ma’am" breakneck pace (thank you, Dean Martin). These are, however, tracks which, ironically, rather take away from the power and strength of Enforced. With respect to originality, or rather, lack thereof, even the best tracks have Slayer written all over them in bold capital bloody letters, which becomes downright ridiculous on the aforementioned "Retaliation".

A cruel, merciless and devastating concoction of gellied gasoline, napalm wreaked havoc and mayhem in the jungles of Vietnam and now it’s making a comeback on Enforced’s "At The Walls" album. It may not be the most original music but, then again, napalm, too, was invented in 1942 so who’s to blame?

ROGGA JOHANSSON – Entrance To The Otherwhere