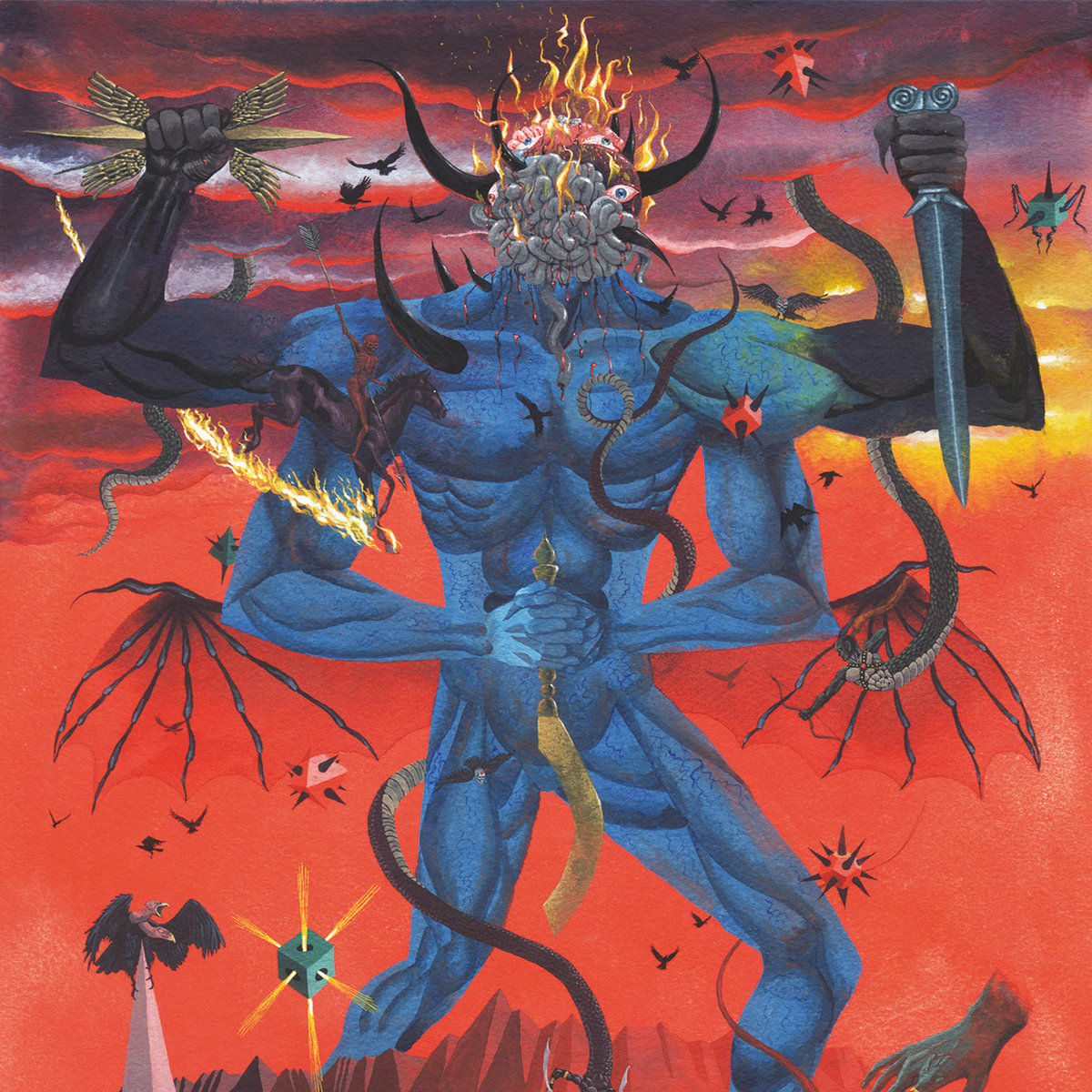 The Telluric Ashes of the Ö Vrth Immemorial Gods (I had to make sure I spelled this correctly) is the fourth full-length album by Esoctrilihum (I frankly had to make sure I spelled this correctly as well) in only two years, with the debut Mystic Echo from a Funeral Dimension being released in 2017, and two additional albums being released last year, one bearing the moniker Inhüma, and the other having a title so absurdly long that typing it out here would mean the end of the entire review. Now then, long, occult and esoteric album titles aside, what does this impressively productive, mysterious French one-man band have in store for us?

As it turns out, a whole lot. Esoctrilihum is probably best described as blackened death metal with countless bizarre twists. Opener Kahlbas Mha (Ode to the Muhorn Pain) throws the listener headfirst into a labyrinth of cascading riffs and interesting sonic landscapes, resembling something like a groovier Dodecahedron with the tribal and shamanic atmosphere of The Ruins of Beverast’s Exuvia. The unnamed Frenchman stacks countless guitars, sound effects and chants creating a truly impenetrable and oppressive sound from the very first second. The record then moves on to what is possibly the best track on the entire album, namely Kros Ö Vrth, again with the densely packed wall of vocals and guitars, leaping seamlessly between Cult of Fire-esque, trance-inducing melodies, and death metal riffs resembling later day Behemoth. The momentum is (only figuratively) lost to some extent on the following track, due to what will soon reveal itself as this album’s biggest weakness; namely that even experienced metal listeners may, if not need, at least prefer some breathing room over the course of 75 minutes of a densely packed hellish riffscape. This issue is temporarily forgotten over the course of the next two fantastic tracks, with some of the most head-turning transitions on the record and the introduction of some thumping orchestral-yet-industrial-sounding percussive embellishments that will recur throughout the record, giving off a very triumphant vibe and making everything sound just that much heavier. The issue does however recur later in the record with some tracks simply blending into one another, not really offering a lot of memorability until repeated listens, something probably done on purpose in a similar fashion to, once again, Dodecahedron. Sometimes less truly is more.

The mix is simply unrelenting, and will remain so throughout the record, with multiple guitars laying down crushing riffs and swirling melodies, acoustic guitars (and what could be traditional oriental stringed instruments) holding down simple repetitive, mantric adornments that lock the tracks in place as everything else unfolds around them, and lastly, the multitude of vocal tracks slithering like snakes around the listener’s head with creepy whispers being delivered just as eerily and convincingly as the other vocal techniques being utilized, from your go-to death metal growling to black metal-esque screeches to the chanting of doomsday prophecies.

All in all, The Telluric Ashes of the Ö Vrth Immemorial Gods is quite a challenging listen due to its length, unceasing ferocity, and plethora of different ideas, and in a similar vein an album that might not reward the listener until after a few spins, after which the listener will finally be sent into the maze with a map and a compass and the sheer audial assault becomes a bit more familiar.  Truly an ambitious project of a restless creative mind, and one I personally believe has a lot of potential. I will definitely be going back into the previous catalogue of this project, and so should you, although such an oppressive beating is not everyone’s cup of tea.

VICTIMS – The Horse And Sparrow Theory