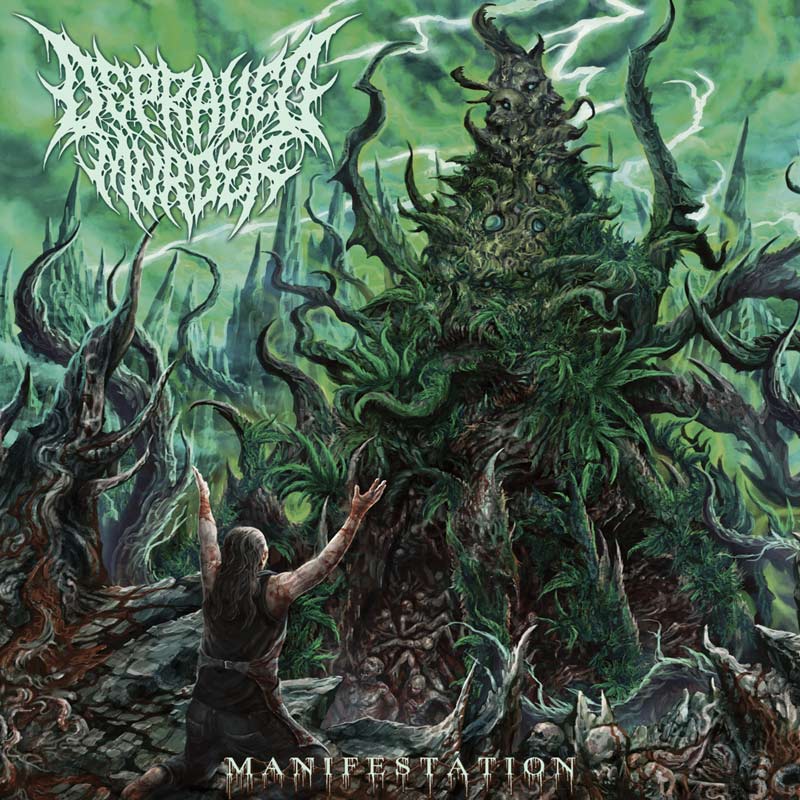 Right from the very name I smelled trouble. Is there murder which is not depraved? These Indonesian brutal death metallers could have come up with a more exciting moniker, although, this one interestingly matches the excitement I get from listening to "Manifestation" – like being slowly drowned in a moderately foul-smelling pool of excrement, not necessarily of skunk or bovine origin but perhaps something between chicken and a human baby. Bad, sure, but bearable. And you only have to smell it for just over 29 minutes, always a plus in such matters.

I struggled through these 9 compositions and you will likely too, because the tracks are so similar in their fast and brutal to slow and oppressive basic structure, they give an impression of a one 29-minute track broken up in 9 sections. These three gentlemen, Azam (bass, vocals), Ogy Pradana (guitars), Sahrul Ramadhan (drums), are definitely skilled but songwriting is equally definitely not their forte despite "Manifestation" being their 2nd full length. The tracks are more interesting in the first half with the opener "Gore Green Meditations" the best of the bunch and the entire second half oozing with boring structures and riffs interspersed with an occasional hook or semi-melody, as tracks practically mimick each other in a pursuit of Suffocation by the way of Morbid Angel in All Shall Perish sauce which can approach plagiarism such as on "Congenital Anomolies Chromosome" which opens almost note for note like Morbid Angel’s "Domination" album. Also, while there’s no denying the decent production or the Azam/Sahrul powerful section or Ogy’s skilled technical riffery, Azam’s one-dimensional monotone vocals tend to drag the material down.

Rarely have I heard such a meat-and-potatoes brutal death metal, especially on the follow-up. Hopefully, third time’s a charm.