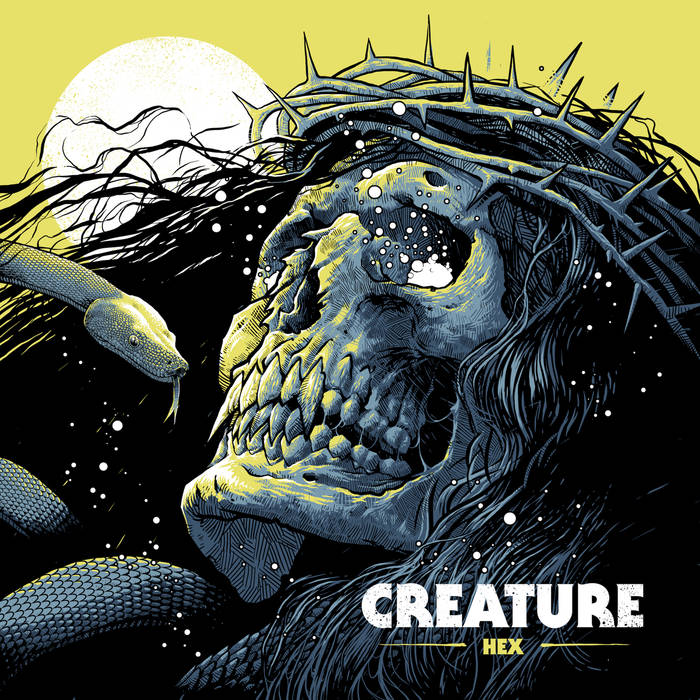 SCRAPING MOULD FROM BLUNT KNIVES – AN INTERVIEW WITH CREATURE

Not that long ago I came across a wonderfully aggressive and hard-hitting entity from the grimy city of Birmingham appropriately named CREATURE, and these guys literally blew me away by means of their dense and highly atmospheric brand of hardcore music. Overwhelmingly crushing and yet riddled with plenty of nuances and subtle details, this particular ensemble is something out of the ordinary and have a unique sound of their own. We caught up with guitarist/vocalist James Thomson in order to learn more about the band itself as well as the creation of the violent slab of brilliance that is "HEX".

Greetings, thanks for taking the time to answer these questions of mine – much appreciated! First of all, I have to tell you that I absolutely love and cherish "HEX". It took me by surprise as I had not heard anything about the EP or the band prior to its release, but I was completely blown away, to say the least. What is the atmosphere within the CREATURE camp like these days now that you have this killer release out?

JT: That’s very kind of you – we massively appreciate it. We’re taken aback by the response. We knew that we were releasing something to be proud of and that the music was true and meaningful to us, so anything else is a bonus really.  We’re excited to play shows now, there is some very cool stuff in the pipeline, and we have a hometown release show on May 31st in Birmingham (UK) to look forward to…

For those out there who are not familiar with how CREATURE came about and how it all started, could you briefly outline its history and tell us a bit about the members of the band? Are some of you involved in other bands? How and why did you decide to join forces and bring CREATURE into existence?

JT: Well, we’ve all been in a number of different bands over the years and all have experienced various levels of the music industry. We met through the Birmingham music scene, Tom Bradshaw (drums) and I met at a show through a mutual friend and entertained the idea of putting together something nasty and raw sounding. We were both in between bands at the time so we worked on some demos and eventually Dan Willett (bass), who is a producer in Birmingham, smashed it when we jammed and joined the fold quickly thereafter. We experimented with other members too, but eventually we felt more comfortable as a trio, as we trust our individual musical abilities.

Was there a certain motivation or desire behind the launch of the band? In other words, was there a specific purpose or an agenda of sorts, or did you personally feel that you needed this particular musical outlet in order to express yourself fully?

JT: The band is a release for us, and we all agreed that it had to sound…’real’. My opinion is that timeless heavy records have an energy and authenticity to them – so we were determined to not have triggered drums, processed guitars, sub drops etc. Dan and Tom recorded the bass and drums live together without a click track and that really set the tone for the raw and genuine sound we were looking for. I do think there is a place for everything in music and enjoy musicians and bands who incorporate electronic techniques into their arrangements. However – for CREATURE we felt that it wasn’t an option.

I totally dig "HEX" as it is a captivating and hard-hitting EP from starts to finish. How long you actually spent writing and recording the entire thing, and where did you record it? When were some of its first couple of tunes composed?

JT: ‘HEX’ is actually the first of three EPs that will be released over the next 18 months, I think we wrote and demoed 12 finished tracks over a six-month period in total. ‘Blackness’ was one of the first song ideas that Tom and I jammed out which then ended up as the closing track on the record. Once we’d demoed all the tracks out and we were happy, we then visited Steve Sears at his studio in Watford at the time. Steve had produced some incredible albums for Gallows, Krokodil and Hang the Bastard so we saw him as an obvious choice for producing the records.

The lyrics were not included with the promo that I received, so I was wondering if you could tell us a bit about the themes and subjects that course through your songs? Is there a concept of sorts to "HEX"?

JT: This particular EP addresses a mixture of ugly situations and behaviours. ‘Witch’s Grip’ is a metaphor for the feeling of isolation and anxiety after a trauma, leading you to grieve for a time or existence you wish you still had. ‘Crestfallen’ is a reflection on the dark behaviours of a creative mind while soul searching during the creative process. ‘Liquid Gold’ is a vent on consumerism and the unhealthy values we as a society hold for material gain and ‘Blackness’ was inspired by a sickening racist attack I read about online in post-apartheid South Africa.

How do you guys go about writing and composing songs for CREATURE? Do you compose and write stuff separately and then bring all of that to rehearsals where you then experiment with it, or is everything written and arranged collectively?

JT: Generally, an idea is brought to rehearsal and then we work our way through it musically to refine the finished arrangement. It’s a very natural process and it gives us all a chance to add our own input. I will then take the music and write the vocals over it. Then we may re- record the track as a strong demo if any new ideas surface that complement the song – before we then lay it down in the studio.

Do you improvise when in the studio with various sounds, effects, song arrangements, and the likes, or is everything more or less planned out and set in stone before you start recording? How do you guys like working in the studio?

JT: We have the foundations down for the song structurally and demoed before we go into the studio, it saves time and means we have already got a strong connection to the track. However, in the studio there are times where we may decide to make the odd change here and there to benefit the track. Some of the parts may have a few variations that we test to see which works better.

Our time in the studio with Steve Sears was an awesome process, as a producer he has a fantastic ear for tone and overall track energy, so it was great having him behind the desk. I think he captured the energy of the band incredibly well – while also adding in cool atmospheric ideas, more of which you’ll hear on EPs two and three…

Are you intuitive and spontaneous when it comes to composing songs and coming up with ideas and so on?

JT: Very much so, a lot of my favourite guitar and vocal parts happen in the moment. I like to lay down the guitar riff ideas by pressing record and then just jamming the first thing I feel. As a rule, the opening excitement you get from picking up an instrument after a break translates well and often my strongest ideas happen instantaneously.

I love the cover art for "HEX". Who came up with that brilliant piece of work? I also love the fact that the cover art goes hand in hand with the music and adds to the overall experience of listening to your compositions.

JT: Thank you. We take the artwork as seriously as the music. Luke Preece designed it and we’re extremely proud of it. Luke and I are old friends, I’ve always been a huge fan of his work – so we discussed some basic concepts and then the rest of the magic was all his doing. It was quite humbling that he was so passionate about the pieces, he likes the music and referenced the lyrics to inspire the designs. We couldn’t have asked for a better creative to bring our work to life to be honest!

Just out of curiosity, how often do you guys get together and rehearse?

JT: Pretty much once or twice a week, we like to hang out and do our best to stay on gig form. Before tour we will always ramp it up so we can hit the ground running.

What are your plans in terms of touring the "HEX"? What about a UK tour?

JT: There are some exciting things in the pipeline, but as far as announced dates go, we have Birmingham UK on May 31st and Cardiff on the 2nd June to celebrate the release of ‘HEX’.

Speaking of gig and touring and so on, do you like being up there on stage giving it your all and being on the road, or is that merely a necessity of sorts in order to promote your music? I have spoken to quite a few musicians over the years who do not really enjoy performing live and touring, but instead tend to view it as a necessity in order to get the word out there and bring the music out in front of people and so on, so I was curious as to how you feel about it.

JT: Ha – I’ve never thought of playing live as chore. I love the feeling of being on stage, so if anything, I get excited about the prospect of performing to people. It’s what I’ve always done and for all its potential highs and lows, the fact you get given an opportunity to travel doing what you love really is a privilege.

What albums/artists are you currently listening to and immersing yourself in at home?

JT: As a band we have pretty broad listening tastes, I do listen to heavy music but I’m also a big fan of chilled stuff. My current playlist is a mixture of SiKTh, Puscifer, Baroness, Meshuggah, Dillinger Escape Plan, Converge, Low Lives and then Bjork, Anthony and the Johnsons, Sigur Ros, Ed Geater and loads of others – you’ve got to slow it down sometimes.

What is the metal/hardcore scene in Birmingham like these days?

JT: Birmingham has always had a great impact on heavy music, with Black Sabbath and Napalm Death legends of the city – I don’t think that will change any time soon. We have some great bands, venues, promoters and festivals so it’s still a great place to play. Big shout out to Ryan and the team at Surprise You’re Dead Music, who are doing big things for the scene here.

Thanks once again for taking the time to answer this interview for Eternal Terror Live. Any final words or threats to our awesome readers?

JT: The two best pieces of advice I ever heard were: "Live your life, this isn’t a rehearsal" and my personal favourite; "Don’t be a dick". Two strong quotes to live by I’m sure you’ll agree. Oh yeah… and make sure you buy or stream the EP or I’ll kill you! Or something….