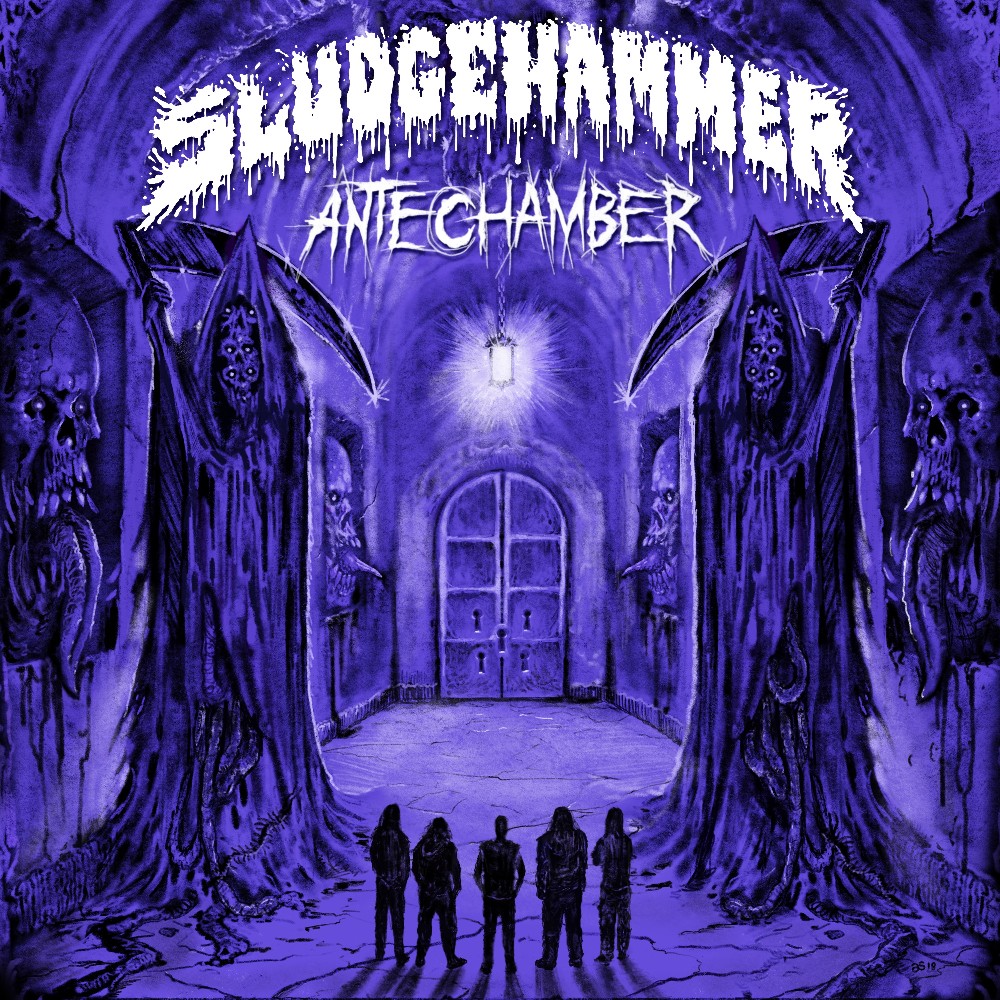 Another one of Asher Media Relations/Jon Asher-backed outfits, the Canadian death/thrash/groove metal ensemble could not be more aptly named. SLUDGEy riffs delivered with mechanical precision and weight HAMMERed down your ears, surprising outbursts of understated melody and growling vocals supported by backing clean power metal-like croons guarantee great fun for the listener. But the follow up to "The Fallen Sun" is a little rough around the edges, deviating from the excellency of the predecessor, a little more familiar and less challenging to the ear.

For the most part Sludgehammer does know how to write hooks and melodies and combine them into actual songs. They know and handle their instruments very well letting the excellent, "dirty" production emphasize their abilities. Sludgehammer knows their classics to draw inspiration from: Megadeth’s "Countdown To Extinction", Anthrax’s "Sound Of The White Noise" and "Volume 8: The Threat Is Real", Testament’s "Low", Revocation’s "Existence Is Futile", Biomechanical’s "Empires Of The Worlds", Pissing Razors’ "Cast Down The Plague" or Pantera’s "The Great Southern Trendkill", etc, etc. Sludgehammer know the difference between inspiration and emulation and walk the fine line just fine. All the chips were there for a fantastic album. They just made a very good one, instead.

For the duration of "Antechamber" it seems as if the two guitarists: Jeff Wilson and Tyler Williams, were fighting gladiators, one a Sludge (bassy slimey old school dirty death/groove riffs) and the other Hammer (technical thrashy classic riffs) whereby the songs can get really weird yet fiercely original such the country-flavored "The Long Road" seemingly inspired by Metallica’s "Ronnie" or maybe black metallers Glorior Beli for a chorus as unusual for the genre as for themselves. The apogeum of their sparring is the lengthy, convoluted, progressive "Supernova Silhouette" which showcases the fullness of what Sludge-Hammer is capable of. Anthrax-ian chorus drives the catchy "Balance Of Life" on top of hook a’la Napalm Death "Down In The Zero", while favorite "Broken Sea" recalls Megadeth’s "Architecture Of Aggression" for original technical riffs that are as difficult to pull off as they are memorable. The Wilson/Williams chemistry is not impeccable but they get a lot things right such as the excellent solos, most notably on the opening "No Control" which is riff-heavy on early Revocation or the aforementioned mentioned "Balance Of Life".

Another noteworthy aspect of "Antechamber" is the vocal duo: Josh Stephne and bassist Dan Ayers. The former’s growls are akin to Florian Magnus "Morean" Maier (Alkaloid), Bill Steer (Carcass) and Joe Rodriguez (Pissing Razors), vocals which typically drive the verses with riffs, too, akin to Alkaloid (No Control). Dan Ayers adds a different dimension by utilizing clean vocals recalling Yannis "John K" Koutselinis from Biomechanical (especially on "Forsaken Souls") or Joey Belladonna (Anthrax) or Howard Jones (ex-Killswitch Engage, Light The Torch). The two opposing vocals magnify the duo guitarist battle between the forces of Sludge death and Hammer thrash. This polarity is hardly original but quite entertaining, not to mention that both aspects are perfectly fused and executed.

It is in the songwriting, as it’s most often the case with flawed albums, that Sludgehammer not always succeeds. "Eternal Darkness", while showcasing excellence of Fernando Villalobos’ drumming, is based on one simple repetitive riff only scarcely supplemented by more ambitious guitarwork, the concept recalling Anthrax’ "Potters Field". After several applications, "Eternal Darkness" remains one of the album’s weakest links, incidentally, right before the strongest, "Supernova Silhouette". Another one is the (anti)drinking anthem "Line ‘Em Up", heavy on the good riffs but a horrible song, especially for a closer.

On "Antechamber" Sludgehammer seems to devolve from their excellent "The Fallen Sun" debut, but it is not a too far departure, with a few standouts, excellent production and execution. To band’s credit, the skillful use of guitar and vocal polarity plays to the strength of the album, which is more enjoyable than not, but, overall, the material feels a little safer than the debut except "Supernova Silhouette" and "The Long Road". I would suggest exploring more of this kind of convoluted progressive approach and expand it onto the entire third album.