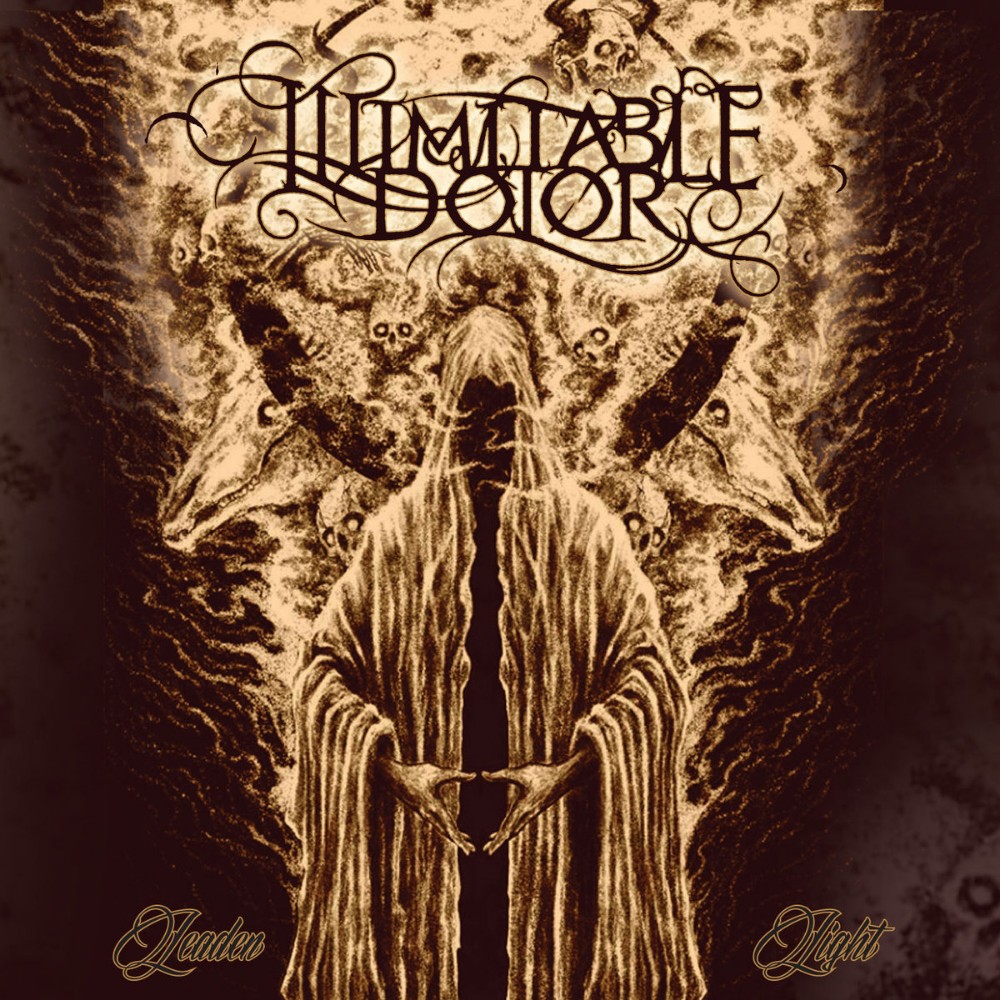 Illimitable Dolor. Pain and sorrow without end in space and time. A horrifying perspective but what an apt name for this Australian deathened atmospheric melancholic doom metal ensemble, which formed in 2014, the year of conception probably something to do with the closing track "2.12.14", a possible tribute to a too soon departed dearly beloved soul to Illimitable Dolor members, Stuart Prickett (vocals, guitars), Dan Garcia (guitars), Yonn McLaughlin (drums, vocals), and Guy Moore (keyboards), what with the melodeclamation "sleep well"?

In any case, if you want to fully experience their 2nd full length "Leaden Light", it is necessary for you, dear reader, to be enveloped in this, Illimitable dolor, if only conceptually so that the first note of the opener will be a natural and obvious consequence of this preparation instead of giving you a major hypothermia. It may not be based on the actual lyrics, which are not available, but is rather my personal reflection inspired by the music.

Why do bad things happen to good people, asks Rabbi Harold Kushner in his famous book on the problem of evil, God and human suffering. He asks why mankind must suffer at all with a good God the master of the Universe, even people who could not possibly bring misery on themselves by their own heads or hands. Why are the innocent dead and the guilty alive? Where is justice, where is punishment?, asks the comic book hero The Punisher of the Almighty, echoing Biblical Job, who remains the atheist’s strongest argument against faith. This same Bible even boldly admits that the sorrow of this world is a sorrow unto death (2 Corinthians 7:10b) as more people commit suicide than in any prior time of human history. To them, these times feel like illimitable dolor.

"Leaden Light" is their story. It is a work of incredibly delightful sadness enhanced by the unique Prickett/McLaughlin dual simultaneous clean/growl vocals somewhat recalling the Romannian doomsters Descend Into Despair. While this delightful sadness that fills you up and overflows, healing you within, is primarily the point behind the very doom/death genre, it has been a while and certainly not this year that a doom/death record sucked me in like Oddysseus by the Sirens. To come up with so rich melody the guitar duo Prickett/Garcia knock on Peaceville Trinity door (Anathema, My Dying Bride, Paradise Lost), so the best of the best, by they have somehow made it so their own the way Swallow The Sun or Daylight Dies did (both also echoing in "Leaden Light") that all you can do is what Oddysseus did: marvell at the depth and sweetness all but devoured by it.

The favorite songs are long but they are packed with ebbs and flows, now a "Beyond" Omnium Gatherum progressive transition now an Evergrey-ian piano sequence enhancing the steady yet cascading flow of multiple rich melodies (Horses Pale And Four), then alternating for a slightly more black metal approach in the vein of Enslaved or Borknagar (Leaden Light Her Coils), while the opening "Armed He Brings The Dawn" not so much takes as downright tears pages from "The Angel And The Dark River", "Like Gods Of The Sun", "The Light At The End Of The World", "The Dreadful Hours" or "Songs Of Darkness, Words Of Light", the essense of what is My Dying Bride, spilling from your speakers or headphones like blood from a severed artery. And, interestingly, the relatively shorter, simpler tracks (Soil She Bears, 2.12.14) are hardly reflection on inconsistent songwriting or unevenly spread inspiration, rather they are small breaks and closures between and after elaborate musical baobabs, to borrow from Dave Mustaine’s description of Megadeth’s songcraft. They serve their purpose excellently and fit one another like hands and gloves on this near masterpiece of an album.

Why not 6/6 then? There are moments, most palpable in "Armed He Brings The Dawn" where I would have loved some midpaced abrasive death metal transition such as the one in My Dying Bride’s "She Is The Dark", especially since Guy Moore comes up with spectacular, rich, almost movie score level keyboard background melodies which could accompany such transitions. In the aforementioned opener the listener is fooled into a false sense of it coming up next but it is just a different melody at the same pace. While the track is still excellent without it, boy would that addition elevate it! Instead, we have an approximately the same pace throughout the album, which some listeners may find paradoxically distracting. ID’s fellow country doomsters, Mournful Congregation, of which influence is also present on the record, had the exact same issue with their latest, last year’s album. But it could be I just love how My Dying Bride, who I count among my top 4 favorite bands, amalgamates doom and death, the beauty and rugged. That ID does not cannot take away more than half a point because of the fantastic, clear production which actually does rival My Dying Bride on any album.

Comparable to Insomnium’s "Across The Dark" reproduced at half the original pace, "Leaden Light" is not an album to miss this year if you’re an avid connoisseur of the genre with a veracious appetite, an epic near masterpiece, with a single minor, if noticeable flaw, an untrained ear could possibly not even identify. I tend to keep excellent albums on my hard drive after reviewing them, but it takes a special one to keep it on my personal mobile phone. "Leaden Light" is just such a special album. Check it out, maybe it will be for you too.

EAMONN FORDE – The Final Days of EMI: Selling the Pig