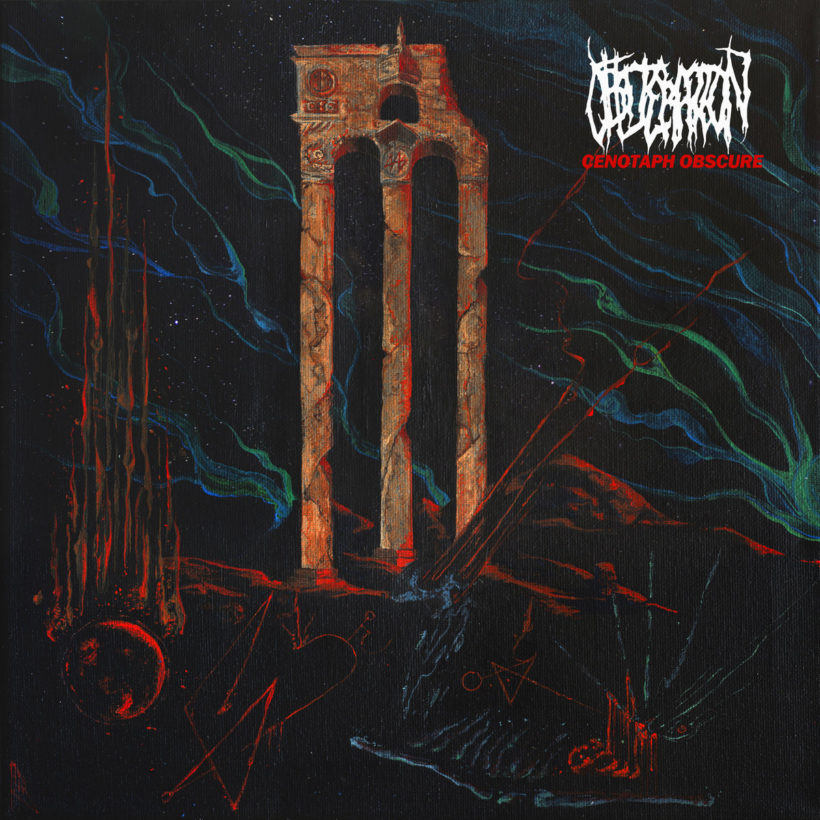 In 2001, UFF was formed as either a non-metal entity or a metal band so obscure that it was not worthy to have a profile on Encyclopedia Metallum. In any case, they broke up in 2003, only to reform a year later under the name Obliteration which today is vocalist Sindre Solem, (one!) guitarist Arild Myren Torp, bassist Didrik Telle and drummer Kristian Valbo. Already original on their debut "Perpetual Decay" (2007) Obliteration mixed Slayer, Morbid Angel, early Paradise Lost, Obituary and pre-"Arise" Sepultura in a compellingly memorable death metal concoction that was just as deadly at breakneck speed as at an ominous slow moving crawl. "Necropsalms" (2009) moved into Motorhead, Napalm Death, early Kreator and early Deceased territory abandoning much of the early influence, while "Black Death Horizon" (2013) additionally revisited early Death, especially "Scream Bloody Gore". Is this here, their fourth installment "Cenotaph Obscure", closer to the debut or does it continue in the direction marked by its two predecessors?

Going into this album, I expected Obliteration to go back to the sound of their debut while moving away from the previous records. I got a much better deal. Influences from all of their previous albums were combined now into one mighty unity while additional influences added for a greater impact. Having truly developed their own sound they have forced a reviewer to use entire sentences in a weak attempt to describe it but still I will try. Obliteration circa 2018 sounds like Morbid Angel by the way of Emperor with classic Death’s memorability, Deathspell Omega-ian/Mastodon-ian/Gorguts-y dissonance, The Chasm-ic complexity and murky atmosphere and Motorhead-ian drive with a Napalm Death madness and rawness of execution. You got that? Ok. In short, death metal rides on a strong black metal basis with a doomy edge and so many APPROPRIATE changes on a dime that you will need a migraine medicine of your choice after each application.

I want to say that this primordial concoction is pretty even, each of the six tracks (plus a short instrumental/interlude) deserving high marks, but I personally was impressed the most by three: the title track, "Tumulus Of Ancient Bones" and the favorite magnificent "Eldritch Summoning" that ends like a classic Emperor song. In fact, if I could name just one album of reference it would easily be Emperor’s "IX Equilibrium" which, too, was a genre melting pot. Still, I don’t recall even that album ending so unbelievably heavy and metallic like a steal factory falling apart and crumbling down under some unknown force as "Cenotaph Obscure". The songwriting, if we can call them songs proper, the skills and execution of every member are top notch, and, keep in mind, they seem to have purposely written a very challenging material to reproduce instrumentally, whereby the old adage, the mark of a professional is to make hard stuff look easy, holds very true. The cave-like yet powerful sound is one of the most unique productions in recent memory. Yet I would not call it perfection for a reason.

At times, this incredibly complex, relentless and chaotic music could use more rightly understood memorable hooks. Those are there, to be sure, but they seem to be in greater supply in the first half of the album while the last three tracks appear more extreme, convoluted and less memorable while not the least less devastating. This may have been done on purpose, such as to leave extra space for improvement on subsequent endeavors (like Morbid Angel on "Covenant" or Emperor on "Anthems To The Welkin At Dusk" or Dimmu Borgir on "Enthrone Darkness Triumphant") or maybe not, but this is the one thing that won’t let me give it a higher score than above.

In times of originality in decline with so many jumping the bandwagons left and right, Obliteration shows everyone that you can still make metal albums that boggle the mind, heart and spirit at once. In a fair world, these guys would be as huge as Morbid Angel or Emperor. The world as we know it being far from fair let’s see if they can defy it since they now wield a powerful deadly weapon with "Cenotaph Obscure"