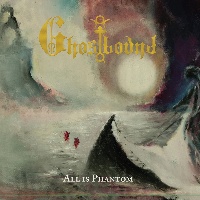 According to their bandcamp page, the progressive avantgarde/art rock project Ghostbound was formed by musician/actor Alec A. Head, the guitarist of blackened doom metal outfit Kosmodemonic, while he was still a teenager, but Ghostbound begun to function as a band, also comprised of Noah Shaul (bass), Talha Alvie (guitars, keyboards) and David E. Richman (drums) in 2013. It took this lineup more than 4 years to come up with the firstfruit of their labor – "All Is Phantom". Dedicated, in loving memory, to Alec’s deceased father, Timothy James Head (1947-2012), the band claims to explore cinematic rock/metal with nods toward black metal, post-punk, ambient/atmospheric, 80s “big music” in the vein of Crowded House, The Waterboys, Big Country et al. all in order "to shape e modern novel, where nihilism take a new deadly & seducing form" with themes of "life, loss, grief, isolation" as well as "friendly and vicious ghosts that hover beside all of us". Have they achieved what they set out to do or have they collapsed under the weight of unrealistic goals?

"All Is Phantom" is all its creators envisioned and, indeed, "the perspective and memories of a broken heart flee, drowning into an ocean of melancholy". Produced by Alec A. Head, engineered/mixed by Jesse Cannon and Mike Oettinger and mastered by Jesse Cannon, "All…" is some of the most original music I have ever laid my ears on and quite difficult to categorize. Is it progressive? Check. Is it art rock? Yep. Is it avantgarde? Big time. Is it metal? Both almost and definitely in places. If I were to pick one album it is mostly like it would be Opeth’s "Heritage", except "…Phantom" is sometimes better at both progressive rock and Opeth, particularly on my four favorite tracks. "Earthen Ground" marries the delicate Marillion with Anathema’s "One Last Goodbye" for one of the most moving pieces on the album, "Night Time Drowning" with a Hypocrisy acoustic intro, Alec’s vocals similar to Aaron Stainthorpe’s (My Dying Bride), Type O’Negative feel and atmospherics gives way to absolutely amazing dynamics worthy of the best veteran proggers, which "It Goes Away" mixes with a signature classic Opeth, at 3:30 mark very close to Opeth’s abrasive riffing as if teasing how far you can stretch prog rock before it turns into metal, and, finally, "Goodbye" turns Soundgarden’s "Black Hole Sun" intro through alternative transition turned bona fide metal which gets more aggressive and progressively more dynamic Alec’s vocals so wide range and explosively emotional, Michael Åkerfeld (Opeth) in sync with Martin L Gore (Depeche Mode) as if possesed by a choir, then it calms down ending with Bono Vox-ian highs for a triumphant musical orgasm.

For all the accolades, some tracks do not hold the candle to the rest, failing to reach these wonderful highs mentioned above. While the opener, "The Gallivanter", with its U2 "Unforgettable Fire" strumming turned slightly Mike & The Mechanics "The Living Years", can be excused as it leads straightway into the excellent Opeth-ian/Mastodon-ic "The Wildest Of Rivers", and the miniature instrumental "Intermezzo", with its Metallica "Welcome Home (Sanitarium)" ending serves as an interlude to divide the album in half while leading to the very good Evergrey-ish/Marillion-ic "Tidings" which wonderfully straddles rock and metal without either one prevailing, I question the full blown old school black metal on "Roof And Wall", which sticks out like a sore thumb, while being an average track altogether and the only positive thing about it is that it paves the way for the triumphant, heart-shattering "Goodbye".

There’s a lot of good to be said about "All Is Phantom": fantastic, rich, warm production, multilevel masterful instrumental and vocal performance, especially the everpresent audible and frequently distinct Noah’s bass as well as David’s fantastic drumwork, insightful and moving lyrics, excellent songwriting with minor flaws that to someone else may not be flaws at all. I recommend this excellent progressive album to fans of great, emotional music and I assure you that time spent with it will not be wasted.

HAISSEM – Panacea For A Cursed Race<