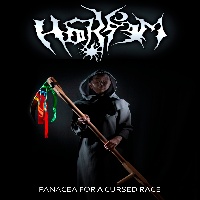 HAISSEM – Panacea For A Cursed Race<

I just recently reviewed multi-instrumentalist’s extraordinaire’s Andrey Tollock’s doom/death metal project Sunset Forsaken’s debut album "Chameleon Waters" (5/6) and indicated his main project, melodic black metal outfit’s Haissen’s second album review was in the works. As with Sunset Forsaken, all instruments and vocals are still done by one man, in "real" life a miner (!) whose compositional, instrumental and vocal knowledge, skills and abilities are so impressive that, again, I get angry at dung that passes for music these days which sells mutiplatinum while real musicians, like Andrey, have to work a menial job for living when, in a fair world, they should be making a fabulous living utilizing their musical talents. Then again, this is hardly a fair world. Digression aside, I never heard the debut "Maze Of Perverted Fantasies" or last year’s "Hatavism" EP, so my modicum of comparison should be Sunset Forsaken’s debut. How, then, does it compare?

To be sure, there are similarities between the two projects one can already hear in the opening "Drown Within Temptation", featuring the progressive acoustics and Andrey’s cleans that evolves into a Daylight Dies melody before erupting into seriously pummeling black metal, overall, for the best track on the album. This progression and death/doom leanings the opener shares with the closer title track, the one most associated with Katatonia, Opeth’s "Orchid" and Sunset Forsaken, with more different melodies than you can shake a stick at, almost as if a prelude to "Chameleon Waters". A surprisingly Deceased-like (Fearless Undead Machines), excellent "The Dividing One", is at once supermelodic and most brutally black metal song, recalling Dissection but also progressive metallers Extol. These three songs set a very high standard for the artist, a standard that can be hard to maintain throughout the entire effort.

The album’s aforementioned three strongest tracks are almost counterpointed by the remaining two, too chaotic and disjointed in comparison. They don’t exactly pale in comparison to the former, but they cause me to drift into a distant thought, something I don’t tend to do when listening to the others. "प्रलय (Pralaya)" does have some potential, particularly at the beginning with that clever ripped sliding riff and subsequent melody, but is marred by too drastic change of pace, almost amelodic nature and slow Enslaved/Borknagar/Cradle Of Filth black metal flavor (Andrey does sound like Dani Filth, too), while, on the other hand, surprising with a ballad ending a’la Death’s "Perennial Quest". Similarly disjointed and chaotic is "Thy Evil Hath No Limits", with Enslaved overtones, more so even for the clean vocals, but also features some Deathspell Omega dissonance. There is, again, tremendous potential in these tracks, that is only partially realized, though, admittedly, the songs are far from filler.

Andrey Tollock is no doubt a fabulous musician and vocalist, whose production is superb in both cases, Sunset Forsaken and Haissem (that audible bass!) but he seems to shine the best at melodic death doom as, more often than not, his black metal appears too chaotic, disjointed and inconsistent. That is why, while I think "Panacea For A Cursed Race" is still a solid relase, I consider Sunset Forsaken "Chameleon" waters a more consistent and superior effort.

STEPHEN PEARCY – View to a Thrill