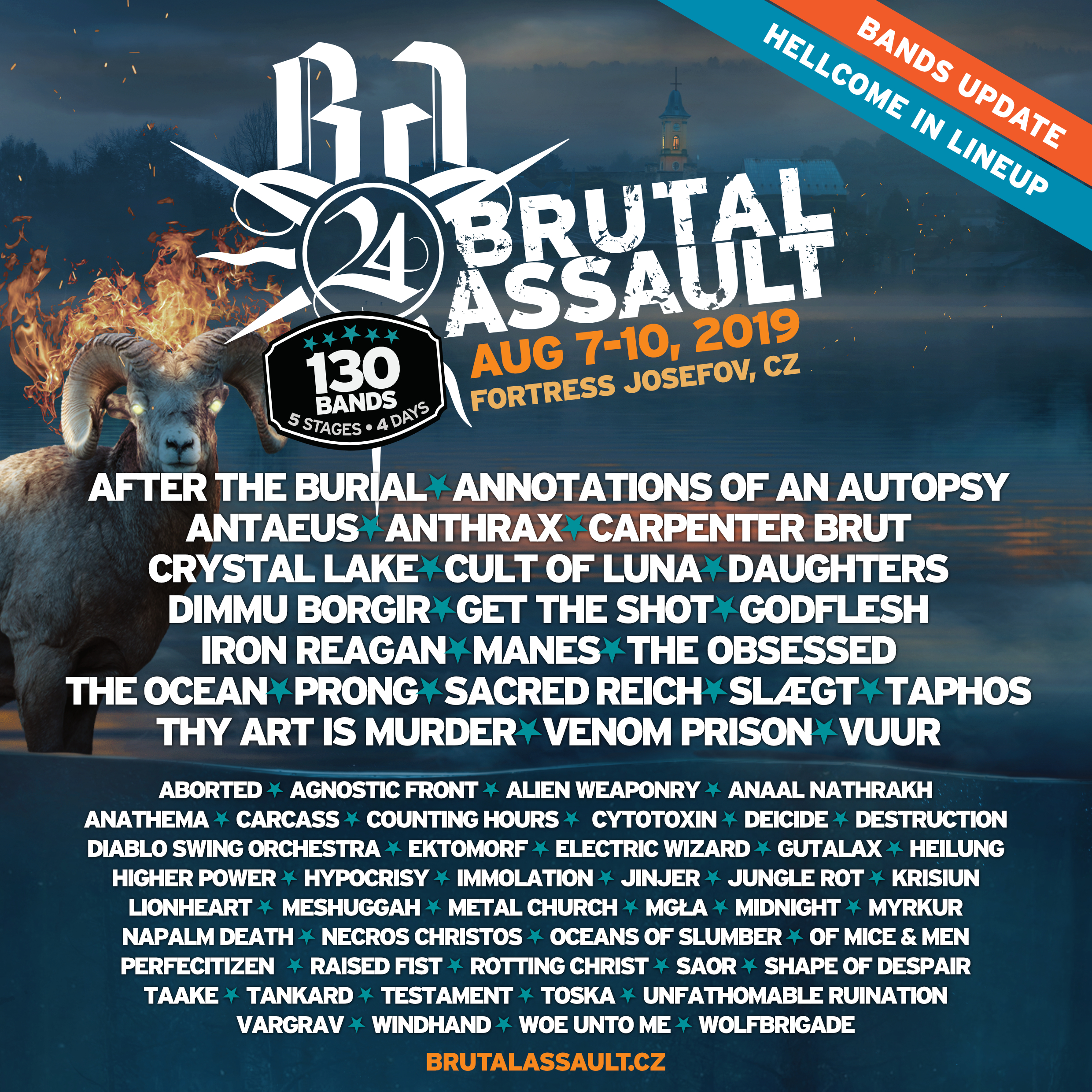 Let’s open this mega update with black metal stormblast! Over seven years, deathlike silence has filled the halls of the world’s biggest black metal forge, whilst powers have been gathering to resurrect the band right in time for their 25th anniversary. And now DIMMU BORGIR have finally returned with a vicious work of art that is their latest album Eonian and they are coming to storm the main stage at Brutal Assault!

Wicked aural filth comes from the islands with GODFLESH, who are highly regarded as one of the pioneers of industrial metal; they took industrial to the next level with their fuse of heavy guitars and mixing it with slow drum loops and effects and their unique approach has spawned several musical styles since their conception.

Brutal Assault will also present a combo of iconic thrashers that need no introduction, ANTHRAX and SACRED REICH will make it to the fest alongside upcoming crossover thrash ministry IRON REAGAN and a staple name of the genre PRONG. Elusive French synth mastermind CARPENTER BRUT draws its influences from 80s TV shows and B-movies loaded with cheap thrills and sharp synthesizers. The mysterious and discreet man behind the pentagon – or the Brutagram as his fans would call it – evokes an encounter between Justice beats and the universe of John Carpenter. Into the brutagram at BA 2019! Through parted flesh, mental scars and waning health – from misfortune and adversity that would have broken lesser men, comes another black metal legend that almost doesn’t perform live… Welcome French titans ANTAEUS, come to your condemnation and witness Satanik Audio Violence! For the fans of modern death metal and hardcore amalgamation we are gonna have glowing hot Brits VENOM PRISON, their returning fellow countrymen ANNOTATIONS OF AN AUTOPSY and Australia‘s own THY ART IS MURDER who are on fire right now! Anglophone domination over the genre will be contested by Japanese metalcore sensation CRYSTAL LAKE, who just set an impossible bar to leap over with their latest output Helix. If you think it’s enough incredibly energic music for now, then we beg to differ because we are also gonna have vigorous metal hardcore of GET THE SHOT and American noise rock kings DAUGHTERS, who are doing one of their rare live appearances at BA 2019! Equally rare live are CULT OF LUNA and these Swedish visionaries have been praised for their live performances for a long time and Brutal Assault will host one of their few appearances in 2019. You shouldn’t miss this opportunity to witness a shattering audio-visual feast of iconoclastic proportions! Other thoughtful bands for thinking audience on the list are the German musician collective THE OCEAN with their immersive audial experience, US progressivists AFTER THE BURIAL and Norwegian masters of stellar Avant-Garde MANES. You can also look forward for rising stars of Danish scene SLÆGT, who play an epic blackened heavy metal but without any kind of limitation when approaching the style, their compatriots TAPHOS with their gut-wrenching death metal and progressive heavy metal outlet of Dutch singer Anneke van Giersbergen under the moniker VUUR. Gloomy rock doom in the end, the very godfathers of the genre THE OBSESSED who were formed already back in 1976 by Scott "Wino" Weinrich are back from the dead to perform for you at BA 2019!

In the end, we have some band news – A PALE HORSE NAMED DEATH are unable to perform on Brutal Assault, because of the technical difficulties.