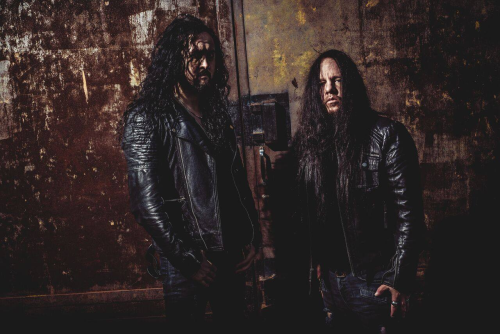 I think I had seen the opening act Hatesphere before probably in Aalborg some years ago, but I hadn’t really listened to it in a while so I had kind of forgotten them previous the concert. But yeah I’ve been listening to other subgenres a lot and well I’m not usually listening to post thrash. But anyway I think it was a good choice for opening act. It was a wise choice to start with post thrash. Pretty groovy, makes you move. Any Pantera fan should definitely check it out. They played one song from the last album called Corpse of Mankind. I think it’s a tad more melancholic like in Gothenburg sound melancholy. It seems the new album “Reduced to Flesh” will offer much more complexity and you can find every possible link connected to the release here

Sinsaenum are a pretty interesting band that brings to their songs so many influences. First thing you need to know is that it is Joey Jordison (ex-Slitypknot) project after he left Slipknot. Due to some major personal problems. I have not read interviews but if you are interested there is plenty of in-depth interviews about everything related to why he left and all that. It has always been the drumming the main reason for me to listen to Slipknot from time to time. And it as cool to hear Joey’s signatures in Sinsaenum. Then you have Frederic Leclerqc who is also playing with Dragonforce and so as expected you get the virtuoso solos included in the package. I actually love heavy metal solos in Death and Black Metal. Like Vital Remains do it. I think DM and BM bands, especially underground ones, should borrow or recruit more Heavy/Power schooled guitarists. Another french contribution to the project comes from Heimoth who plays with Seth which is a melodic BM band. Then you have the vocalist Sean Zatorsky whose Death Metal vocals at times it lean towards numetal and this is not surprising taking into account he has been in Chimaira. And last but not least the guest vocals from Attila add a lot to the mix. I think the experience of seeing Attila singing together with Sean was pretty interesting. Admittedly Attila  is perhaps more out of his element in more modern sounding and catchy songs like Army of Chaos, but he definitely fits like a glove in blackened songs or perhaps songs with parts that fit his low deep range like Ashes and Anfang des Albtraumes. Previous Sinsaenum I saw many blackened hardcore bands (Hexis and Demersal) that got me to reflect over vocal ranges so that’s perhaps why my thoughts wandered to that particular feature.

So yeah my brain goes to pretty different places at the same time while seeing Sinsaenum. I think what surprised me the most is that the influences of each song became so apparent live. It surfaced much more than in the album. Sinsaenum is pretty metal, a mixture of Thrash, Death, Black and some touches of characteristic numetal sound here and there. It’s a kind of journey. You get Slayer, Pantera, Behemoth, Florida DM Morbid Angel, Deicide, Mayhem, Satyricon and Carpathian Forest depending of course of the song. Because each song is its own world. If you have not giving it a listen because it’s connected somewhat to Slipknot and the band happens not to be of your liking then you should just discard the prejudice and give it a fair chance because musically I find it to be more complex and at the very core of everything you hold dear, but yeah still the post thrash and numetal essence will always be there. It’s pretty American. It’s actually a pretty good DM,  thrash or black, when it surfaces. I would like to see them again on a bigger stage at some festival. It’s just that kind of band that fits perfectly and can be liked by many at the same time. It is so varied and yet pretty safe! I think they must have just let out everything they really liked while composing. And you gotta appreciate the attention paid to lyrics for example the most Deicide influenced song Inverted Cross is pretty satanic so it’s tied in. This is a contrast to the new album that offers more introspective lyrics and it’s a bit less orthodox and tight.

Both bands delivered and you even get a Slipknot clown drumming impersonation as a bonus, of course without the clown outfit but still. It was a really good experience, pretty nostalgic and with a good crowd for being Oslo on a Tuesday.

IN THE WOODS… – Cease the Day