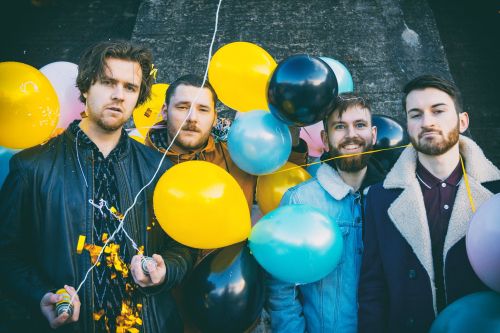 The two strangely endearing Norwegian acts hailing from the rainy city of Bergen, more specifically Slow Stepper and Dobbeltgjenger, laid siege to the cozy and atmospheric venue that is Hulen last night and it turned out to be a highly entertaining and joyous evening for all involved. It was basically a release party in the sense that Dobbeltgjenger were putting out their latest digital single entitled "Paper Cutter", but in a way it was also the perfect showcase for two skilled and captivating local bands who have definitely got something very cool going on. It was awesome that so many people were there to support these dudes and cheer them on.

First up were Slow Stepper whom I had never previously encountered before, but they were quite impressive and I found their eclectic and eccentric mixture of pop, rock, prog, and psychedelia both charming and catchy. The 5-piece ensemble was tight and their compositions were cleverly arranged. In many ways, they had a dream-like quality to them that instantly drew me in. The vocals were a little off the mark from time to time, but other than that I had great time watching these guys perform. Cuts such as "Figure", "Accident", "So Good", "Where Did All the Funk Go?", and "Out" sounded wicked.

I was really pleased with Dobbeltgjenger’s 2018 opus entitled "Limbo Head" and it is one of those records that has really grown on me these past few months, so naturally, I was looking forward to last night’s performance and I was not let down. As with Slow Stepper, there are elements of pop, rock, prog, and psychedelia, but in no way do the two bands sound similar. With Dobbeltgjenger there are also hints and traces of funk, desert rock, and punk, just to list a few examples. It is simply impossible to label or pigeonhole these fuckers as their musical identity is so wonderfully diffuse. They were energetic, charismatic, and above all entertaining to watch. The sound was great and the musicianship was nothing short of excellent, so no complaints there whatsoever. There was a lot of excitement in the air and both the band and audience were in a really good mood. Personally, I enjoyed the live renditions of "Calling Tokyo," "In Limbo", "Magnolia Trees", "Elephant in the Room", and "Paper Cutter" the most, but there were no weak tracks on display as such. A fun and memorable show for sure. Make sure you keep an eye out for any upcoming live dates of theirs. The same goes for Slow Stepper.

ARABS IN ASPIC – Live at Avantgarden