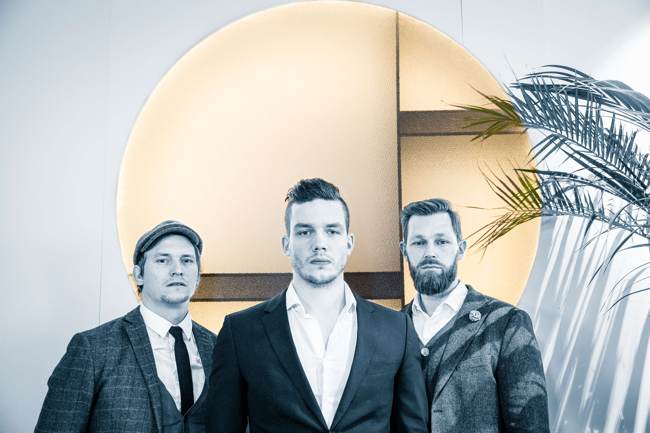 When a band’s members all come from backgrounds as diverse as classical piano, electronica, prog and hard-rock, and if they manage to pull it all together in a consummate fashion to create a unique sound, you would be safe to guess that the band was Norway’s OAK. And, with their latest full-length album False Memory Archive due out on Karisma Records on the 19th October, the Pop/Rockers have released the title track as a single, about which they have this to say:
"If you are somewhat loose with everyone’s conception of what ‘Pop’ actually is, then the track “False Memory Archive” is the album’s pop leitmotif, which still unmistakably sounds like OAK. It also happens to be the album’s title track and, as such, it serves as a kind of introduction to the theme of the whole album. It is a song that appears light and happy in its expression, but all the while it still contains its fair share of darkness."

The track False Memory Archive is available from, or can be heard at: http://smarturl.it/OakFMA

There is still a nod in the direction of the debut full-length, but False Memory Archive is both darker and groovier , whilst retaining that successful amalgam of sound that is neither wholly progressive pop, nor wholly progressive rock, but which is absolutely trademark OAK and is comprised of catchy elements and stunning vocal harmonies, which create that unique duality that defines them as a band.

Oak is a Norwegian progressive/ art rock band that originally emerged from a folk-rock duo. The four members have a diverse background spanning from classical piano to electronica, prog- and hard-rock, with references to the alternative scene as well as progressive rock – something that has combined to make a distinguished and unique sound. Mixing this with great musical skills and a vision of being accessible to a wide audience resulted in their debut album Lighthouse in 2013.

Five years later, they are back with the stunning follow-up False Memory Archive. A natural continuation fromLighthouse, to which it has several small nods and references. The album has been meticulously crafted, with more use of electronics and low bass frequencies. It is both darker and groovier than its predecessor, while still sounding familiarly like Oak. They have taken several steps as songwriters and musicians, and ended up in a slightly darker and progressive territory – where the light still shines through in shape of catchy elements and stunning vocal harmonies, which creates the duality that defines them as a band.