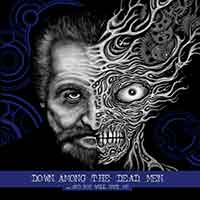 DOWN AMONG THE DEAD MEN – … And You Will Obey Me

Down Among the Dead Men", from which this Swedish/Danish band’s name may possibly be derived, is an English drinking song first published in 1728, but possibly of greater antiquity. Down Among The Dead Men is a relatively new musical project of guitarist, bassist Rogga Johansson (Paganizer, Megascavenger, Ribspreader, The Grotesquary), vocalist Dave Ingram (ex-Bolt Thrower, ex-Hail Of Bullets, ex-Benediction) and guitarist Dennis Blomberg (Paganizer, Ribspreader), with session drums courtesy of Erik R Bevenrud. They play an old school death metal crust-riddled punk and this album is their third. The album was recorded at The Rotpit Studios. Gamleby, Sweden & Panopticon Studios in Denmark, mixed and mastered by Ronnie Björnström at Enhanced Audio Productions in Umeå, Sweden. It is short, a mere 30:33 but plenty enough with this style.

While the effort is a consistent early Hypocrisy/UnleashedGrave/Napalm Death worship (with Ingram resembling Mark "Barney" Greenway) with simple, punchy chugga chugga variations on the same riff, it has a few pleasant surprises. The title tracks’ funny Frankenstein samples (I only need two things: your submission and your obedience to my will) add necessary flavor , "The End Of Time" and "Omega" boast a greater emphasis on melody, the latter a kind of death metal Helloween for the best track on the album, while "Eye Of Harmony" and "Darkness Of Glass" recall classic melodic Obituary. All performances, including vocals and solos are all around excellent and the production slays but songs suffer from severe lack of distinction and variety and by the time you arrive at half-point you will have heard it all.

Meeting the expectations while surprising few and far between may have been their original idea and I realize there is a great following, fan base and demand for such one-dimensional material but I prefer more variety and intricacies in my metal.