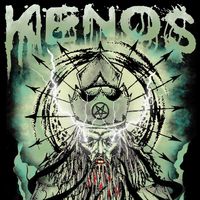 In a very real sense derived from several applications of the Italian progressive technical death masters’ new album, "Pest" feels like the soundtrack to the Apocalypse in eight tight installments. As I listen, I imagine The Spirit looking down from heaven only to see the world in the hands of the few, the rich oppressing the poor, the plutotheocracies disguised as the rule of the people and all the strings pulled by sycophants of the Arch Enemy, pests, such as the one on the cover, who claim to speak and act in The Name but do not. The Spirit is wroth and asks "Who will go for us?". "We will go out", says the Order of Kenos. "You will go out and you will prevail" says The Spirit and sends them down, the four spirits of death metal: Michele (Spallieri, vocals), Domenico (Conte, guitars), Marcello (Fachin, bass) and Sergio (Gasparini, drums), for the fourth time. The journey begins and lasts 31 minutes and 31 seconds. The Order of Kenos can’t go it alone against Arch Enemy with his eight evil princes (Behemoth, Carcass, Cannibal Corpse, Deicide, Hate Eternal, Morbid Angel,Obscura and Fallujah), so they are joined by twelve Sons of Martyrdom (Agalloch, Anata, Benighted, Cannae, Death, Fear Factory, Immolation, Nile, Psycroptic, Scar Symmetry, Soilwork and Suffocation), from whom the 1st battle takes its name.

The opener, “Sons Of Martyrdom”, is a sprawling review of what we are to expect on the album: musicianship tighter than lamb’s testicles, changes on a dime from brutal to melodic heavily inspired by Fear Factory’s landmark “Demanufacture”, or any of the “Colors”+ Between The Buried And Me albums, overwhelming brutality and speed technically precise and mind-boggling but not to the point of listener’s subconscious disengagement, as it is often the case with technical death metal. Play it once or seven times but you’ll never tell exactly what, when and where may hit you: death or jazz, thrash or Eddie Van Halen’s "Beat It" solo from Michael Jackson’s "Thriller" right after New Order’s keys. There would be a great riff for a nanosecond followed by Antonio Vivaldi’s music sample and you can’t swear you heard any of it because it goes by so fast. Amidst the constant interplay between the likes of Benighted, Anata, Death or Morbid Angel, is that Hate Eternal’s “Thorns Of Acacia” from the excellent “Phoenix Amongst The Ashes” in the opener or Fear Factory, Arch Enemy’s “Burning Bridges” or Carcass‘ “Heartwork” melody, Cradle Of Filth’s “Cruelty And The Beast) or an unspecified melodeath lick? I know Suffocation, complete with Michele’s Frank Mullen impersonation, dominates “Buried And Forgotten” and the track ends in the vein of Megadeth’s “Hangar 18” (Rust In Peace), and that “Immortal Breath” turns Hetfield/Mustaine riff of “The Four Horsemen” (Metallica/Kill ‘Em All) into a death metal riff, but it could be also “Architecture Of Aggression” from Megadeth’s “Countdown To Extinction”. Is “Leaving Me Now’s” riff more “Hammer Smashed Face” of Cannibal Corpse or Morbid Angel’s “Sworn To Black” (Covenant)? Are we using Tool’s keyboard sample in the “Sweeper Of Remains” or are more inspired by Dream Theater? We cannot tell, but what we can tell is that we hear heavy breathing, shouts, scary reverb echoes and tons of other things interwoven throughout, all of which enhance the listening experience.

What could have been improved? Repetition of certain riffs which appeared briefly but were really good such the one in “Leaving Me Now”? Some more melody in "Shooting At The Moon", which was brutal but not as enticing? The melodies of "Buried And Forgotten" and "Immortal Breath" repeated like in other tracks? It’s individual preference, really, because the material is so close to perfection, plus flawlessly produced by Domenico and Andrea De Bernardi in the Italian Eleven Studio.

My favorite death metal albums are those that combine relentless extremity with hooks and melody and “Pest” is such an album. Kenos really hit me square in the jaw (to say nothing of other body parts) and impressed me with seemingly boundless creativity. “Pest” is a stunning achievement that echoes Michele Spallieri’s shout at the beginning of “"Shooting At The Moon": Live or die young!