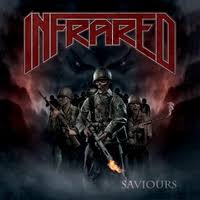 The Canadian trashers Infrared have been around for as long as the San Francisco Bay Area Thrash Metal scene, having begun around the time Metallica, Megadeth, Slayer and Anthrax (later collectively known as The Big Four of Thrash Metal) were just getting over their influences and developing their own unique sound, while Exodus, Testament and Death Angel were barely getting off the ground, Infrared, not as fortunate as their peers, having recorded a demo in 1988, disappearing shortly thereafter for 24 years, and reactivating to release the old material that became their debut "No Peace". Four years after that, "Saviors" was recently released with 8 brand new tracks.

Since Infrared (Armin Kamal – Guitars/Lead Vocals, Kirk Gidley – Guitars, Vocals, Al Groulx – Drums/Vocals, Mike Forbes – Bass/Vocals) lived and breathed the San Francisco Bay Area Thrash Metal scene, naturally, that sound, vibe and climate rubbed off on "Saviours", down to production, which, unfortunately sets vocals at the only appropriate level with bass notably lower, guitars even lower to the point of sounding atrociously flat and drums sometimes great and sometimes like the infamous typewriter ("Saviour", downright alternative metal, the worst offender) Most of the time the record sounds like thrashy "Load" (Metallica) and it does not help that some riffs (They Kill For Gods) are in that vein. Having said that, I am aware that not every band can afford services of Andy Sneap, Terry Date or Rick Rubin.

Regarding the performances of the musicians, there’s not much to complain about. The guitars slay, slice and dice (Project Carma, The Demagogue, All In Favor, Genocide Convention) and I have to give Armin a standing ovation for his fantastic vocals, part James Hetfield, part Tom Araya, part Chuck Billy (Metallica, Slayer, Testament, respectively). Armin sounds like someone half his age, and, with the exception of Chuck Billy (who’s still perfect after all these years) I’d take Armin over any other veteran thrash metal vocalist. Just listen to that prolonged scream on "Saviour"! On the other hand, there are times he sounds so much like Hetfield or Araya I caught myself searching the internet for evidence of guest appearances of both. "Genocide Convention" is where it gets downright ridiculous, as actual vocal lines and riffs echo "Circle of Beliefs" and "The Thing That Should Not Be" (Slayer, Metallica, respectively), but then again, compare "Eye of the Beholder" (Metallica) and "Expendable Youth" (Slayer) and call me in the morning. The songwriting is overwhelmingly excellent, guitar duo Kamal/Gidley, negotiating between slower, more subdued moments (Saviour, The Fallen), midpaced Metallica "Lepper Messiah" (All In Favor) or Testament "Do Or Die" (The Demagogue), the sinister Slayeresque ones (Father of Lies) or the full on Megadethian Peace Sells/Rust In Peace thrashfests (Father of Lies, Genocide Convention), all complete with series of fantastic Gary Holt/Alex Skolnick solos (The Demagogue, Savior, most notably) in practically every song. Infrared presents a compelling lyrical review of the biggest contemporary ails, from the oppression of the rich over the poor and the need for revolutionary upheaval, (All In Favor) if the rich can’t understand that "their ways breed hate and bring their own demise", through a tribute to the military (The Fallen) who get used by sinister politicians (The Demagogue, Saviour), civil/legal helplessness against sinister religious cults posing as legitimate spirituality and the denouncement of pedophiliac Roman Catholic clergy through words of Jesus Christ (John 8:41, 44) revealing satanic religious insanity in the church of his times. The lyrics are perfectly delivered amidst appropriate changes in pace, intensity and melodies reminiscent of mid era Megadeth or Anthrax (check out the end of “The Fallen”).
With "Saviours" Infrared proves that they are relevant today as much as their peers were back in a day, but the excellent performances and songwriting are marred by substandard production.