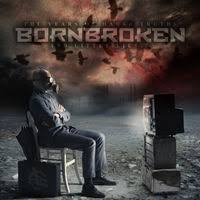 BORNBROKEN – The Years Of Harsh Truths And Little Lies

While BornBroken’s nearly flawless debut “The Healing Powers of Hate” knocked me on my tail with a combination of inventive songwriting and aggression, the new album impresses with double the aggression and not much else, leaving me longing for the intricacies, ebbs and flows of the debut. What was once barely under the surface while decorative, Slipknot association in style and songwriting, is now powerfully exposed. BornBroken continues to come up with fresh innovative riffs but often they seem haphazardly, even hurriedly assembled into actual songs, with few notable and noted exceptions.

To be sure, the performance is top notch. Samuel Santiago’s drums are tearing down everything in its path while the Red Voizard’s bass is thick as walls of Jericho, Mike Decker/Simon Savard’s guitars pummeling you into submission so relentlessly you will cry for mommy already after the title track (note: review written on American Mother’s Day), Pepe Peloquin channeling his best Marcus Bischoff/Max Cavalera/Phil Anselmo (Heaven Shall Burn, ex-Sepultura/Soulfly, Pantera, respectively).There’s no ifs, ends or but(t)s (not kicked) about it, this is a flawlessly executed record and you can feel the hard work put into it, with a production that ought to set the new standard in all of metal; thick yet clear, punchy but not car-rap-bass-cringworthy, all of the above sounding really good in my new wooden Symphonized earbuds.

The opener made me smile, as “Empty Souls” utilizes the old gospel classic “The Old Rugged Cross” to the point of “the emblem of suffering and…” as if to emphasize that this Roman instrument of Christ’s death-torture has somehow become a symbol of Christian pride, which would have its most famous victim reeling in disbelief and horror. The band actually quotes and refutes some of the pitches proselytizers use, such as “repent you sinner” (as if Christians were not sinners!) with relentless anti-evangelical fury, double the aggression of the debut and the Slipknot’s “Iowa” nu metal influence. The most notable songwriting efforts come early on, be it the brutally excellent video title track that recalls “Roots” Sepultura and faster Pantera, “Torn” or “The Only One” (a testimony of recovering addicts) citing “Chaos A.D.” Sepultura/Soulfly eponymous debut, wailing wonderworking squealing guitar on top of concrete ultrariffs, a signature feature on the remaining tracks. After that, regardless of the excellent thrash groove of “No Stranger To Failure”, “The Years” plunges in quality, briefly only flashing thrashy brilliance on the Fear Factorily mechanically precise “Live Or Die”, but regaining prowess for “Father Death”, an anti-suicide anthem that sports classic Slayer riffs and a truly moving outro recalling the ballad sections of Pantera songs, and the closer “Listen”, interestingly, the only track that fully recaptures the brilliance of the debut, heavily borrowing from Machine Head’s “Burn My Eyes” thrashy beginnings (my favorite section), to say nothing of the simple yet thought-provoking messages such as “this is my life if you don’t like it there’s something wrong with yours not mine" or "it’s hard to find that someone who deserves the sacrifice", but hardly ending on such an epic note as their debut.

“The Years of Harsh Truths and Little Lies” to “The Healing Powers of Hate” feels like Pantera’s “Vulgar Display of Power” to “Far Beyond Driven”; bigger, ballsier but somehow robbed of the same magic and impact. Great ideas do not always transfer into finished products whose parts are better than their sum, as the listener begs for more interplay of light and dark. I understand the guys wanted to write an ultra heavy and aggressive soundtrack to the horror and the manace of the times we live in, and in this they succeeded splendidly, however, while Phil Anselmo rightly preached “the releasing of anger” to “better any medicine under the sun” (Pantera/Mouth For War/Vulgar Display of Power), BornBroken’s sequel is not something you want to enjoy as an all-immersive experience on a regular basis if you look for both angels and demons in your metal.