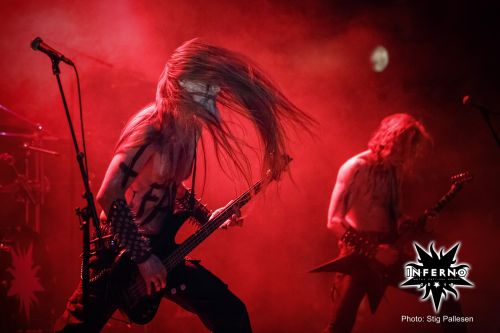 Tsjuder live@Inferno Metal Festival 2018
Photo by Stig Pallesen/StiPa Photography
The last day I got to see far more bands than the previous day. Djevel delivered a pretty good show. I like their 90’s vibe a lot. I had read an news article, previous the festival, about how unreachable they are. Their frontman does not like people in a party mood apparently. But he has not asked Origin what a really metal party mood means clearly. All particularities apart, the show was pretty convincing.

I went downstairs to see Empyreal with some remote feeling that I had green lighted it for myself on a previous occasion, as I was finding out which bands I could afford to miss or avoid entirely for the sake of rest or eating. Empyreal are a Blackened Death band from Germany. They were infused with lots of energy because they were playing here and you gotta love that spirit in underground bands. I think they have some Amon Amarth vibes from time to time but are actually quite crushing, not catchy for the most part. Or else their blackened parts can be something fans of Zyklon may appreciate. It was a pretty energetic concert from a pretty grateful band!

So it was Tsjuder’s time and well that was something that finally made me move again. The best Black is the one akin to thrash I think. They do show how it is done! Last time I saw them I couldn’t enjoy it thoroughly, but at Inferno it was the perfect experience.

Napalm Death live@Inferno Metal Festival 2018
Photo by Stig Pallesen/StiPa Photography
Dunno what has gotten into me for the past half a year but except for Brutal Death with Grind influences, some really Tech Grindcore and some Goregrind I have not been able to enjoy grindcore that much. So I just went to grab something to eat during the Napalm Death concert. I know many would die to see them and so on, but that’s how it is for me. I catched the Schammasch show tho. They are from Switzerland and play a combination of Doom Death and Black. They are in Dodecahedron’s vein live, so it became yet another relaxing and a good experience again.

I wandered around the Electric Wizard show knowing that I don’t like it. I like Doom with some Stoner, at times yes, but not Stoner going Psychedelic get-a-mushroom kinda thing. They were just showing the usual hippies turned satanists old videos. Basically stuff that I guess no one would raise an eyebrow for back in the days amongst the hippie culture, but thar successfully provoked a satanic panic. The kinda videos that inspired a whole generation of cheap low production bordering into soft porn metal videos. All the deviant nuns and the naked fuck for satan girls-next-door. Those musicians “lucky” enough to have edgy girlfriends got those videos done. It’s now a motif in metal and that was before bands went monk style. But, I guess, the trend is dwindling nowadays. It is probably getting harder to get female volunteers in this social media era with a higher level of self-conciousness. Anyway I left the show as the glimpses of the peeping tom in the videos turned to be quite unnerving and pretty creepy. I left to wait for Grave first row like I was their biggest fan, but there was little better to do, really.

I had a memorable concert with Grave in The Netherlands. Although I didn’t get to see them up close I thoroughly enjoyed the excellent sound. Now since there was little else to do I secured a first row place. It looked like I was their biggest fan! It was worth all the waiting tho. I got again the metal feeling from Obituary and Tjuder back, like you can’t stop yourself from headbanging. The sound was more crushing back at The Netherlands, but well, that was compensated by their attitude. The stuff you get by being able to see them play from up close. They are so energetic especially the bassist, it’s contagious. They do love what they do and are by no means trying to look evil. It’s pure joy of playing. Just good energy 🙂

Carpathian Forest live@Inferno Metal Festival 2018
Photo by Stig Pallesen/StiPa Photography
I came to the Carpathian Forest show a bit late, to find your usual disturbing Nattefrost thing as expected. You see Nattefrost is actually making lots of masks as a hobby, he has been on this for months. Last year it was random people, now it is artists, so he made one mask of Ihsahn that he put near his microphone. Several other masks were attached to the drumkit. Their latest album is one of his paintings where he uses blood and yeah well. I enjoy some songs but others I find a bit simple to my liking, yeah I have not been able to get into CF completely yet, but I stayed for their entire show! I like Nattefrost, the side project, but yet again I won’t ever see it live and I’ll die waiting for another album. My epitaph will contain a long list of excellent side projects with no further releases after the initial debut and almost none live shows. So yeah a slightly weird end for me, pretty Black Metal nonetheless.
PREVIOUS POST

NO HOT ASHES – No Hot Ashes