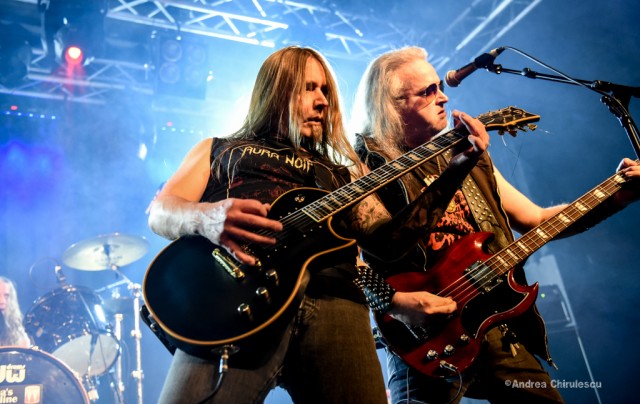 Our colleague Karina had a chat with Apollyon about the band’s newest release, Aura Noire, how it came to lifeor how the band found out about a missing lette rin their name

How to innovate and keep the sound current while dealing with old school sound?

We are just doing what feels natural to us. Also we are mixing ourselves this time to be sure it doesn’t sound too flashy.

I attended the Partysan gig last year and there were some sound problems. Besides technical problems, how does that kind of incidents affect the mood while playing live? Do you need to be in a particular mindset to perform your best?

We have a different sound on stage than the sound you hear in the crowd.So it can sound shit to us but good to you or the other way around. For us it is more inspiring to have a good sound on stage obviously. If we cannot hear what we are playing it will of course affect our performance and maybe we will look less confident/inspired. It’s a never-ending worry of course and can become less worrying by bringing your own soundguy/stage monitor guy..loads of crew. But of course all this costs money so mostly we just use the local crew/sound people. Some of them are good..some are not. And some misunderstand how we want to sound.The dream would be to be able to be your own sound technician every night but that is physically difficult.

You guys live far apart from each other, how do you deal with that when it comes to composing, rehearsing and such?

Me and Aggressor live an hour away from each other now so it’s not that bad any longer. Anyway when we started making the new material we rented a house in Portugal after a show there. We had friends throw in gear so we could rehearse all day/night. It was all 4 of us. With our old drummer as well. We recorded the scetches for "aura noire" there. Then probably a year later we rented a flat in Bucharest for a week and used a friend’s studio for a week, making new stuff and recording again.

Then lastly I think me and Aggressor rented a rehearsal place in Oslo for some months where we made the final touches to the album before we went and started recording it.

In between these sessions we obviously listen a lot to what we have made to get new ideas/discard bad ideas.And because we don’t have a steady rehearsal routine being old and living far away from one another it takes quite a lot of time. Before when we all lived in the same city and had no obligations we could rehearse once or more a week and we were always recording rehearsals back then too. So the whole process was quicker. Anyway we could have released this album 3 years ago but then we wouldn’t have had the time to listen and quality control the material before we released it.I am glad we waited. The album sounds much more complete now.

What can we expect from Aura Noire? How has the sound developed thus far?

Well it sounds like us. No huge surprises. But in general it’s a bit more thought through than "out to die", that felt a little rushed. The "new" thing is that we only use one guitar track throughout the album. No overdubbing except from one standout middle part and on the outro. So everytime there is a guitar solo you will only hear the bass in the background.Also there is no overdubbing of vocals so if you hear two vocals it is because both me and Aggressor are singing.

This was just something we wanted to do as a little inspiring challenge for ourselves. It’s also what you will hear live so kind of more honest I guess. So yeah, Blasphemer does the guitar track. Aggressor plays bass and sings most of the songs. I play drums and sing the rest plus I mixed the album which is also something new.

Aura Noire is the grammatical correct way to write the band’s name in french. I guess you have gotten comments on that throughout the years. Is that one the origin of the album’s title?

We have definitely heard it but not über often. In our minds "Aura Noir" wasn’t necessarily that French anyway. They are two words that many people understand regardless of their knowledge of French. And I guess most people who listen to our music don’t know/care if "aura" is a female word in French thus when combined with "noir" it needs an "e" at the ending. Frankly we don’t care either. It’s just slightly annoying. Very slightly.

How did you come up with the band’s name back then? When did you find out it needed the "e" to be grammatically correct?

A friend of ours suggested the name for Aggressor’s solo project back in the day. I helped him play drums on one track and guitars on another on his second demo, and when he later ditched the project and we decided to start playing this thrash metal inspired black metal together we just kept the name. We found out about the E probably half a year later. Our reaction was something like :"oh well,we will never become big in France then"

Tell us about the process of composing and recording the album, does it get easier or harder to make albums with time?

I think the riffs still come natural to us. It’s not really difficult to make cool riffs. The difficult part is like I mentioned earlier that we don’t practice every week and live quite far away from each other.

Where do you find inspiration while writing music and lyrics?

For me riffs usually just pop up in my head. If I want to remember them I have to first learn how to play them, then record them. I lost 2 phones during the creative process of this album so loads of riffs are missing but it’s not too hard to make new ones.

Aggressor wrote all the lyrics this time so I cannot really speak for him. But generally I think we try to let the song inspire the lyrics. It must fit the song in a way. So they tend to be ugly/gloomy pieces of poetry. Timeless preferably.

I’ve read some artists do not like to listen to other music while creating their own stuff, some others do not. What do you think of it? Do you listen to something, if anything then which bands?

I don’t really have any preferences when it comes to that. Like I said the riffs just come to my head. But I can be inspired by listening to/watching other bands. Inspired to make my own stuff, not necessarily to sound like others do.

Old school sound coming from Sweden, for example, is pretty different than what you would expect from Norway. How you would define the norwegian version of the old school sound in your own words? What are the most important factors that have helped to shape it?

Yeah I guess the typical Swedish sound is very produced and melodical with downtuned guitars. The closest thing we have to a proper old school signature sound here would hopefully be something along the lines of darkthrone after soulside journey. A more raw approach. But I am not hugely fascinated by thousands of bands trying to copy  "Transylvanian Hunger". That particular album works because it has a certain atmosphere to it but it’s lame when other bands try to copy the sound…or copy the kind of  riffs with a much nicer sound. Doesn’t work at all. Sadly I think the typical  "norwegian sound" is often associated with these nice versions of Transilvanian hunger.

But personally I like Aura Noir to sound pretty dry and organic. LIke the music we grew up listening to.