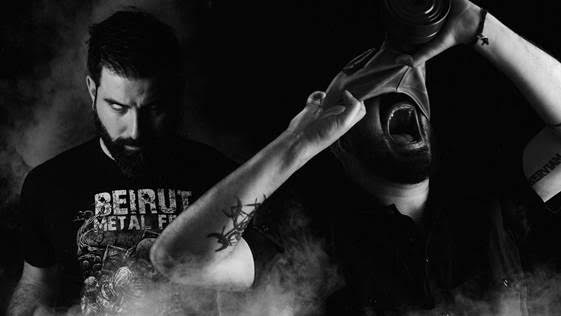 Lebanese blackened metallers KAOTEON have unveiled new song ‘Barren Lands’, taken from their new full-length album, Damnatio Memoriae. The album is due for release on February 23, 2018.

KAOTEON is an unusual East-West international extreme metal collaboration, originally hailing from the Middle East but now based in Amsterdam. For Damnatio Memoriae, full-time members Anthony Kaoteon (Death Drive) on guitar and vocalist Walid Wolflust (Ordum, ex-Gothmog) tapped the distinctive talents of bass wizard Linus Klausenitzer of Obscura and drum master Fredrik Widigs of Marduk as guests. After performing with them live for the first time in Beirut in April at the Beirut Metal Fest, Klausenitzer described KAOTEON as, “legends of the Lebanese metal scene”.

As a band, KAOTEON has faced censorship at the highest levels in their home country – they have been put in jail for devil worshipping, attacked by religious groups, and raided several times by police trying to use them as scapegoats to mask political and religious problems in the region. It’s a terrifying but enthrallingly honest story of a metal band trying to exist, succeed and break out of the Middle East.

Vocalist Walid Wolflust says: “Lebanese metalheads are some of the friendliest and most amazing people to hang out with. It is sad to see great potential in this world gone to waste because someone somewhere decided to label people at birth and imprison them into their borders. The scene itself is thirsty for metal, so international bands should expect amazing interaction from the crowd. The Dutch scene – where we exist now – shows strong support for local talent, unlike the Lebanese scene. The Dutch scene loves their bands above all, while we feel that the Lebanese metal scene favors the international bands.”

Damnatio Memoriae succeeds at portraying the band’s justified “f*ck-the-world” outlook with nine poisonous tracks that brim with exhilarating magnetism and needle-sharp riffing. Beginning at track one with ‘Damnatio Memoriae’ – which describes the ancient Latin punishment of eradicating a person or figure from all memory and mention. KAOTEON unleash an all-out ferocious aural assault, attacking the very foundations of their genre with absolute conviction.

Referring to the inclusion of Linus Klausenitzer and Fredrik Widigs on this album, Wolflust adds: “Linus and Fredrik are extraordinary musicians playing with state of the art bands each in their respective genres. Linus is a melodic bass maestro and Fredrik has an amazing delivery that does not lose groove while still being as aggressive as it can get. The best thing about them being a part of this project is that Linus has become a very close friend to us, and that’s what really matters at the end of the day.”

Damnatio Memoriae was self-recorded by KAOTEON, with mixing and mastering credited to renowned Swedish producer Daniel Bergstrand, who is recognised for his celebrated work with bands such as Behemoth, Dark Funeral, Dimmu Borgir and many more of today’s top metal artists.

Damnatio Memoriae is explosive metal at its finest, and is sure to be one of the most buzzed about extreme metal releases of the year.

ON THE WINGS OF A HURRICANE: AN INTERVIEW WITH CRAIG GOLDY