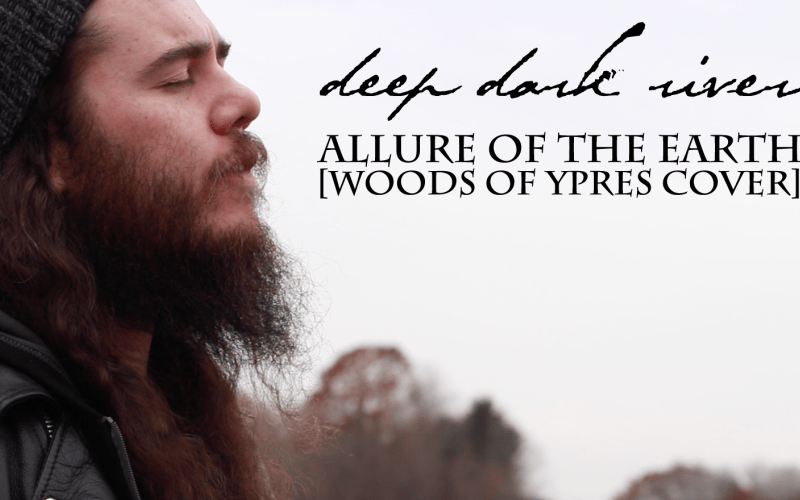 On December 21st 2011, the Canadian metal community lost one of its heroes, David Gold of Woods of Ypres in a tragic car accident. On the 6th anniversary of his death, good friend and fellow metal brother, Morgan Rider of well known Canadian death metallers VESPERIA has released a tribute video covering Woods of Ypres‘ “Allure of the Earth” under his acoustic doom, folk, blues, ambient and soul side project DEEP DARK RIVER. The video was shot in Whitby, UK, Sherwood Forest, UK and Clarington, ON. Teaming up with Bravewords.com, DEEP DARK RIVER is premiering this beautiful tribute to David Gold.

“I have recorded, filmed and edited a cover of the song I performed at his memorial (Allure of the Earth). A lot of this project has been inspired by David and his works, so I feel like this is an appropriate time to announce this project.”

Born in Toronto in 1989, singer, songsmith and multi-instrumentalist, Morgan Rider had his earliest imaginings of life as a musician while contending with a tumultuous childhood at home.

Often overhearing his mother – who is a trained operatic soprano – rehearsing in the kitchen, his love of music and his understanding of it began to blossom at an early age. His mornings and evenings were soon spent banging away on an old Dominion upright piano – made in the town he now resides –  often to the displeasure of those around him.

Despite his ever changing family and residential climates, music remained an integral component to his maturity. In high school he would often skip class to sit in the woods to play guitar. It would also not be uncommon to see him braving a snowstorm with his guitar across his back to walk several kilometres to guitar lessons.

It is not hard to imagine that his main priority remained with music after high school, while most of his peers went on to office and factory jobs or the trades. As his freedom expanded, so too did his ambitions.

As Morgan cast his net further, he began to perform shows further distances away which began to create a small audience of peers and fans. He also began to book small shows and tours for local and out of town bands. It was not long before he was accommodating international artists.

With his expanding resources, knowledge and contacts, he began to tour his music domestically – often spending weeks or months in an old van – branching from coast to coast across Canada. In summer of 2011, Morgan was called upon by his longtime friend David Gold – who was the main songwriter and visionary of the band Woods of Ypres – to contribute his talents to Woods of Ypres for some live shows in the UK that winter. Being one of Morgan’s favourite bands, this was a sound decision for him. Unfortunately, it would not come to pass, as David died tragically months later.

Between 2012 and 2013, Morgan played his first international shows in the U.S.A. with SIG:AR:TYR and at Wacken Open Air in Germany with Crimson Shadows.

Since 2012, Morgan has performed, recorded and toured across North America, performing hundreds of gigs with a variety of heavy metal groups such as Vesperia, Crimson Shadows, SIG:AR:TYR and Woechanter. He also is the sole writer, engineer and visionary for his solo blues/ folk project, Deep Dark River.