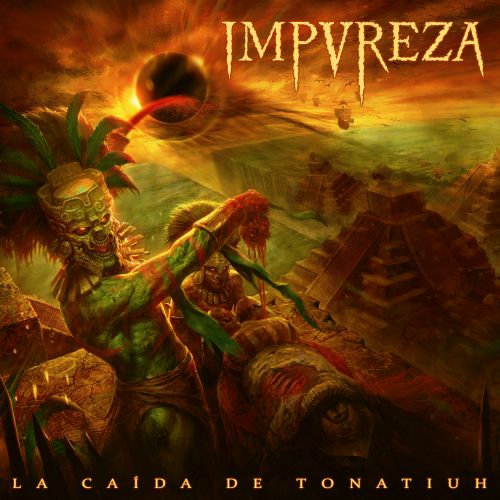 At first inspection you see the aztec/ maya inspired cover artwork and then you may think this is another South American band -as far too many bands have attempted to bring pre-columbian themes into metal with varied degrees of success. Then you read the song list and if you have any remote knowledge of spanish culture the name Paco de Lucia will seem familiar to you. Aztecs / Mayas and Paco de Lucia…weird enough! So you may wonder now, is this some weird case of Spexico? (Spexico being the american tv trope when Mexico and Spain blur and end up fusing) Well no, by any accounts this is no Spexico, this is just a pretty interesting way of doing things. All brought to you by pretty brilliant French musicians (one of them seem to be half spaniard).

The band started in 2004, and their last release was an EP in 2013. They are not that prolific, but nonetheless Impureza is another jewel in the french crown. What an awesome scene it is. Musically the album impressed me a lot! This is pretty high level musicianship. I do welcome all kinds of influences in metal but that’s only if they add something, not if the influences carry metal away until it becomes something else entirely. In this case the external influence adds a lot and makes the whole album unique. When you take flamenco and blend it with Death metal you get a different kind of melody, a pretty pleasant one.

As far as DM goes Sangre Para los Dioses, for example, reminds of Cephalic Carnage’s Xenosaphien and Beyond Creation like predominant bass comes to mind as well. However throughout the album there are polish influences to find as well, Behemoth particularly. Unique to Impureza is that as every song progresses more and more spanish elements are brought in, the flamenco guitars and passionated cleans.There are not only flamenco cleans however. In Abre-aguas (En la Tormenta de Tlaloc), for example, the cleans are more of a narrative nature. The guitar work is absolutely praiseworthy. There are different styles layered. I addition the drumming and bass are excellent as well. It is a pretty versatile album that needs many listenings to fully grasp.
In addition to the flamenco, Impureza can get pretty proggy as well but not all the time. Some songs are pretty tight and filled with awesome scales and virtuous solos. Whoever goes around saying that technicality is souless and has no feeling, may find that Impureza completely disproves this. You can be both technical and excel at feeling if you are an excellent musician.
The amount of flamenco in each song varies, there are songs like El Nuevo Reino de los Ahorcados where it dominates for the first part until eventually blends with metal. I think the tempo in this song can be compared with Fleshgod Apocalypse’s. Other songs like Ultimo Dia del Omeyocan are much more technical and relentless, a bit less experimental. So the tempo and song structure varies widely from song to song. But in spite of this the overall proggy, tech and flamenco feeling is present.
When it comes to the lyrical theme, Impureza is coming with some new way of see things here, and it goes perfectly with the spanish music. The lyrics for the most part are written with the spanish conquistador point of view, and this is pretty cool. Their own conquest story is pretty brutal enough. History is written by the powerful and the victors, this is of course the case with pre-columbian history.
Most myths and the few books that were not burned to ashes, "mayan books" that now exist, were edited by monks and what they depict, the myths, are suspiciously christian so whoever who wants to work with pre-columbian stuff may have a huge dilemma in their hands. Impureza doesn not focus on the allegedly pre-columbian culture, and brings some raw experiences from spaniards. Some of them were pretty honest with their accounts about brutality and the descent to bestiality they underwent while on expedition. I’ve read a bit myself. It’s pretty Death Metal. Take the quest for El Dorado. Gold obssessed spaniards underwent all kinds of hardships, even some of them became cannibals and well they went pretty insane looking for gold that never was found.
All in all a pretty awesome album! I would be surprised if this album doesn’t make it to some end of year lists. If I had a list it would have made it definitely.
www.facebook.com/Impurezaconquista
PREVIOUS POST

NICK HASTED – The Story of the Kinks: You Really Got Me