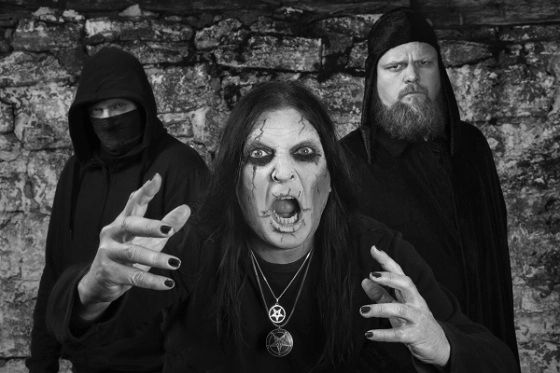 Black Metallers CREST OF DARKNESS, whose founder and frontman Ingar Amlien is an acknowledged expert on Vampirism and the Occult, and who is often called upon by the Norwegian media to comment on such matters, have celebrating Halloween with the release of a lyric video for the track "The Noble Art".

The video, directed and edited by Goffredo Passi for EstremArte videoproduzioni, features the extraordinary zombie foetus sculptures created by the Italian artist Andrea Falaschi can be seen below

Released in December 2016 on My Kingdom Music, "Welcome the Dead" is the perfect illustration of the kind of wide-ranging appeal that CREST OF DARKNESS has built for itself over the years, with a sound that encompasses the Black, Death and Metal genres. It is, according to Amlien, an album that has special significance for him personally, having put a lot of himself and his deepest emotions into creating an album that reflects the kind of ritualistic atmosphere that pervades the band’s live performances.

CREST OF DARKNESS‘ lineup of Ingar Amlien (CONCEPTION, ROQUEFIRE, AMLIEN’s INFERNO) on bass and vocals, Rebo on guitars, Bernhard (ex- PALE FOREST) on drums are now working on what will be their eighth full-length album, and more information about the band can be found at http://www.facebook.com/crestofdarknessofficial

"Welcome the Dead" was released on My Kingdom Music in both CD and Digital and a double LP, which will feature a special bonus track, will be released shortly in collaboration with Metal Age Productions, Kristallblut Records and Supreme Music Creations. It is available from all the usual retailers as well as direct from My Kingdom Music at http://smarturl.it/DEAD-CD in CD and 2LP formats and in digital format at http://smarturl.it/WELCOME-THE-DEAD.