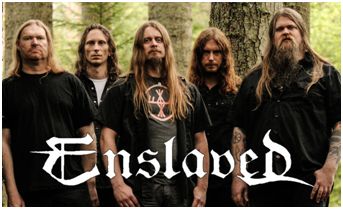 Enslaved was formed in 1991 by Ivar Bjørnson and Grutle Kjellson, and did their first demo “Yggdrasill” in the summer of 1992, while the legendary mini-album “Hordanes Land” was released the year after in 1993.

Enslaved’s debut “Vikingligr Veldi” came in the spring of 1994, while the successful second album “Frost” was released already winter 1994. In many ways “Eld” (’97) marked the opening of a horizon-widening era for the band, with a small detour on “Blodhemn” the following year: Enslaved’s most furious and black-edged effort to date. “Mardraum (Beyond the Within)” was released in 2000; taking on an experimental and innovative approach for Extreme Metal. The band followed up with “Monumension” in 2001; receiving more (pleasantly) surprising positive response to their “no rules” approach to Extreme Metal. Many see an important milestone being “Below the Lights” (’03) – where the progressive yet darker Enslaved emerged. A new line-up was put together after the recording of “Below the Lights”, marking the opening of a new, shimmering chapter.

The new line-up released the album “Isa” in late 2004, and the album put Enslaved at the very forefront of contemporary Extreme Metal; both as a recording and live artist – proving the latter with the release of acclaimed live-DVD “Return to Yggdrasill”. “Ruun” was released in 2006, and received numerous great reviews from fans, magazines and websites worldwide. Early 2007 Enslaved sat out on their first full tour through USA and Canada since the late 90s; following up with treks all over Europe and more North America. Back in the studio the band conjured up “Vertebrae” (’08) together with mixer Joe Baresi – an album that spread across the globe like fire with extensive promotion and extensive touring. More inspired than ever the band worked on a new album throughout 2009, and started recording during the first weeks of 2010. The band’s first co-operation with mixer Jens Bogren; “Axioma Ethica Odini” received Enslaved’s 4th consecutive Norwegian Grammy in the Metal category (“Isa”, “Ruun” and “Vertebrae” receiving the three previous awards).
Enslaved continued to tour Norway, Europe and North America – and in 2012 they inked a worldwide deal with leading label Nuclear Blast Records. This all resulted in Enslaved’s groundbreaking 2012-album “Riitiir”, followed up throughout 2013 – with North American and European tours, and of course more festival appearances around the world. It also became the year when Enslaved finally made its way down under to Australia, a highly memorable and successful endeavor. 2014 were set to be the year when Enslaved took yet another step up, out, forward and whatever directions there are. The year started with supporting Amon Amarth. Then the summer and autumn saw the delivery of two highly public commissioned pieces in Norway, and the recording a new album. 2015 was one of the band’s busiest years; festivals were being played en masse, Enslaved’s own Ivar Bjørnson curated Roadburn 2015 (where Ivar and the band were involved in no less than four performances), and the new album “In Times” and its accompanying tours has set a new precedence for what progressive Extreme Metal can be. True Norwegian Innovation, in short.

2016 was the band’s 25th anniversary – which the band celebrated with tours, festivals and special 2- and 3-night shows (where sets were based on divisions of songs by timeline). It was also the year when debut “Vikingligr Veldi” and collection of rare material “The Sleeping Gods” was released through By Norse Music (co-owned by Ivar Bjørnson). At the end of the year, longtime keyboard Herbrand retired as a performing musician.

The train that is Enslaved does not stop for anything though, and their new album “E” will be released in 2017.

SIBIIR released their debut single in September 2015, a 7" with the tracks Swallow & Trap Them! and These Rats We Deny, on Norwegian underground label Disiplin Media. The tracks were mixed by Andreas R. Westhagen from Carnival Kids / Twin Pines Mall, and mastered by Brad Boatright at AUDIOSIEGE (Sleep, Obliterations, Converge, All Pigs Must Die, Wolves in the Throne Room, Deafeater, Obituary +++).

Swallow & Trap Them! was premiered exclusively on MetalSucks.net, who wrote: "This is one of those songs you pretty much have to be a crazy person not to dig …".
These Rats We Deny premiered on NewNoiseMagazine.com, who had this to say about the release: "These two songs, the first ones ever recorded, already exude a remarkable confidence and cohesion and although the Norwegians aren’t exactly new to the game, this achievement truly deserve some plaudits".

In June 2016 SIBIIR went into legendary Caliban Studios in Oslo with producer Andreas R. Westhagen to record their debut album. After seven days ten tracks were done. The album was mixed by Andreas R. Westhagen and mastered by Brad Boatright at AUDIOSIEGE. SIBIIR eventually signed with norwegian label Fysisk Format, who amongst others have artists like Arabrot, Okkultokrati, Blood Command, Beachheads, NAG, Nils Bech, Kollwitz and Haust on their roster.

The first single from the debut album was premiered exclusively by Music&Riots Magazine, who wrote this about the track called Bekmörke (which means Pitch Black): "Rhythmically energizing and revitalizing, "Bekmörke" is also an authentic parade of riffs that combines a memorable nature with an overall bleak and piercing approach. …yet another horrifically pleasant surprise coming out of Norway …".

The second single Guillotines premiered at Terrorizer, while the video for Beat Them to Death was presented by Metal Injection who thought "SIBIIR is fucking great".