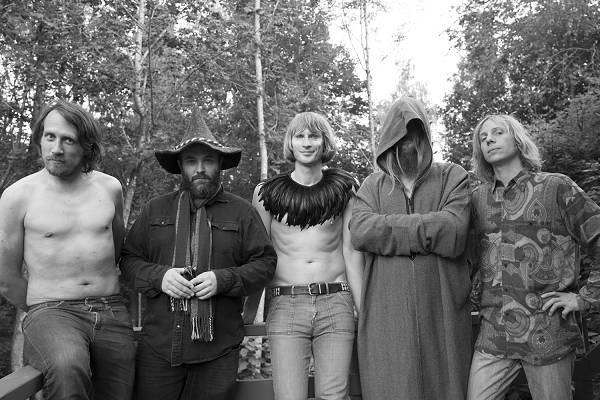 With TUSMØRKE fans (and their children) eagerly awaiting the November 10th release of “Bydyra” , the band’s fifth full-length album, Karisma Records have debuted a track from the album. Titled "Trefar" the track can be heard at http://tusm-rke.bandcamp.com/album/bydyra
As some will already know, with “Bydyra” the Prog Folk Rockers have come up with something quite different, because this album has not only been written for children, there are also children performing on it. The title, which means "Urban Wildlife" gives an idea of the subject matter, which details the enchanting adventures of magical creatures that include a crow, a badger and a squirrel.

According to the band, the debut track is about the Trefar, or Tree Father, who "knows all that goes on in the forest. Where his knowledge dries out, the City Animals must seek out the Library to consult the letters printed on his pulped, dried and flattened children."
Whilst it is true that “Bydyra” is aimed at children, TUSMØRKE have used their unique take on Prog Rock, seasoned it with humour, and produced an album that will also appeal to adults in its exploration of "grown up" subjects such as urban wildlife, the skyrocketing prices of housing in Oslo, the financial crisis, social issues, global warming, and good and bad magic.
Composed of two original mini musicals that were written specifically for a local children’s school in Oslo “Bydyra” contains fifteen tracks and includes artwork especially commissioned from the legendary Norwegian artist Thore Hansen.
Tracklisting for “Bydyra” is as follows:
01. Tre som bor i et Tre (Three who live in a Tree)
02. Trefar (Three Father)
03. Mellomspill (Interlude)
04. Rottekongen (The Rat King)
05. På Biblioteket (At the Library)
06. Vi er eid (We are owned)
07. Dyrene i Byen (The Animals in the City)
08. Elvene i Oslo (The Rivers of Oslo)
09. Signekjerringa (The Sibyl)
10. Tenkeren (The Thinker)
11. Trollmannen (The Enchanter)
12. Lær de fattige å trylle (Teach Magic to the Poor)
13. Dyrene bor ute (Animals Live Outside)
14. Underboerne (The Underdwellers)
15. Katabasis